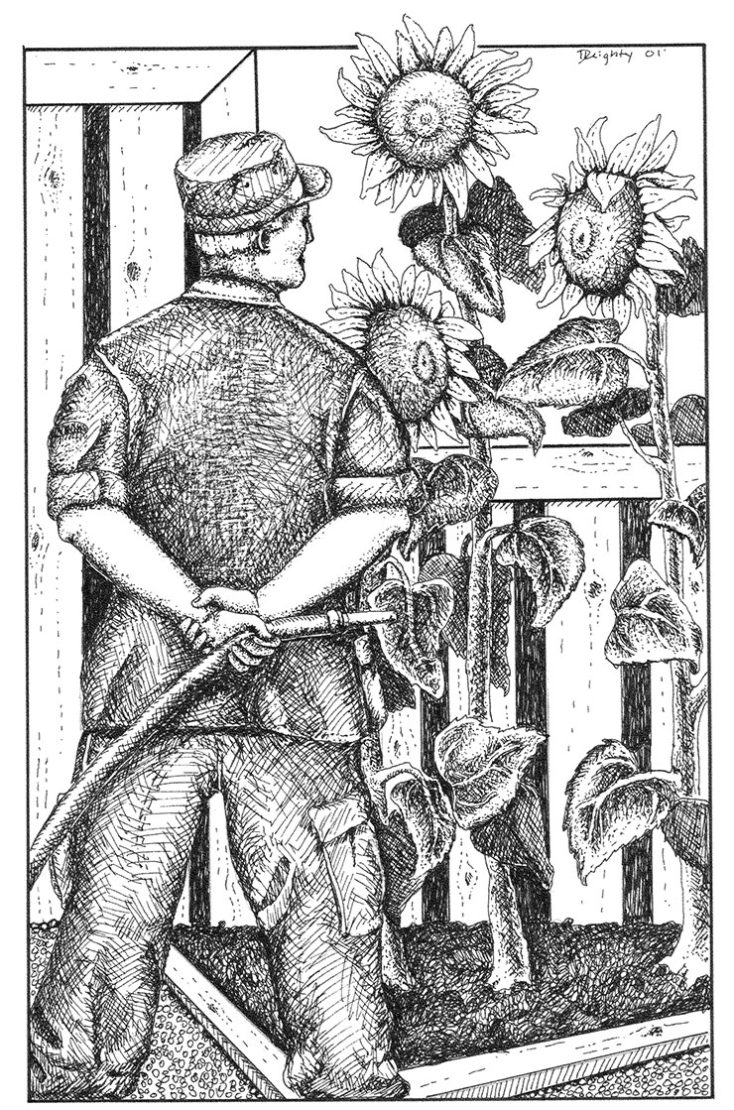 My uncle was with the 8th Air Force in World War II. When he got out, he got into growing gladiolas. My dad was a Marine in Korea. When he became a civilian, fruit trees were his thing. I was a Marine in Vietnam from 1968 to 1969. When I came home, it took me years to realize what plants can do for you.

I never could talk about the war. Neither could Dad or Uncle Louie. But I was worse. I couldn’t talk about anything. My wife said over and over, “You never say anything!” I couldn’t. I didn’t know how. I lost that skill in Vietnam. I don’t know how or why I lost it. I had it when I got there. But it was gone when I came back. I just stuffed things inside and let them eat at me.

Just about all the Vietnam vets I know have a problem getting close to people. When you’re in combat, you form fierce bonds with your squad members. You get closer than you were with your own brothers. After a few of these people get killed, the loss is so great, you’re afraid to get close to other people. You love your wife and children just as much as anyone else does, but you’re so afraid you might lose them you can’t express it. At the same time, you get protective, very protective, maybe controlling at times. You can’t relax and be normal.

That’s how I was: wound-up, tight, silent, a mess. Then one day I heard my dad talking to his apple trees. Well, I want you to know it is very impolite to listen to a man talking to his plants. So I didn’t. But it got me to thinking. I started my garden the very next day.

I was wound-up, tight, silent, a mess. Then one day I heard my dad talking to his fruit trees.

The first year I didn’t talk to my plants like my dad. I yelled at them. “How can you be so dumb?!” I’d shout at the tomatoes. “What’s wrong with you?!” I’d rant at the sunflowers. “Lighten up, would you?!” “It’s over, OK?!” I was like a drill instructor swearing at his recruits. Only when I was yelling at the plants, I was really yelling at myself. Those days of yelling at my poor plants let me sort out the things that were bottled up in me. Sometimes I watered my plants with tears. Going to war isn’t nice. It’s a time where, on one hand you are a god, and on the other you are a scared high-school kid. Then when I got back from the Nam, some people spat on me and called me a “baby killer.” I was so mad, so frustrated, so empty inside I didn’t know what to do. So I yelled at my plants.

It’s hard for a combat vet to ask for help. But my plants gave it to me. My garden became my community. I cared for my plants. I brought them things like water and compost. I protected them from weeds and insects. And they responded. They grew—wonderfully.

After that first season, I got so I could talk to my plants. I could even sing to them, things like show tunes and the Marine Corps hymn. I would say things like, “How’s it going?” “You need anything?” “You look good today.” I learned patience from plants—you can’t hurry a carrot. I got to feel pride again—I have without a doubt the best Early Girl tomato you ever tasted! And I wanted to talk to people again—to tell them about my garden and share my harvest!

Then I started to think about communicating my inner feelings with my three children. By this time my wife was gone, and I deeply wanted a real relationship with my kids, one where we could talk about life and ideas and feelings, not just school and the weather. So I practiced with my plants. “I want you to know how important you are to me,” I’d say. “I’m trying.” “Sometimes I get so mad I just want to shout and I don’t know why.” “I want you to read this book. I think it would explain how I feel about this.”

That made all the difference in the world. Today I am friends with all my children. We can talk in an equal person-to-person way. My oldest, Nikki, is an adult now. We talk each week. She and I can talk about anything. Garrett, my son, will finish college this spring. We are good friends. Whitney, my baby, just got back from a 10-city concert tour with her college singing group. She called on her first day back to tell me all about it. She got the most out of my singing to my plants, because when I realized it didn’t kill them, I started to sing at home. Whenever the kids and I went out in the car, we’d sing.

After I was able to connect with my children, I met Charmaine, the woman I want to spend the rest of my life with. And the garden was right there waiting for me, when I wanted to practice what I’d say to her. 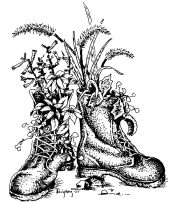 I’m proud now to be a Vietnam vet. I wasn’t a baby killer. I was a guy like my dad or Uncle Louie who got his country’s call and answered it. And I can talk to people now. I’ve learned that people are just like plants. You treat them nice, and they will do the same for you.

The Marines sent me overseas. But it took gardening to bring me home. ❖