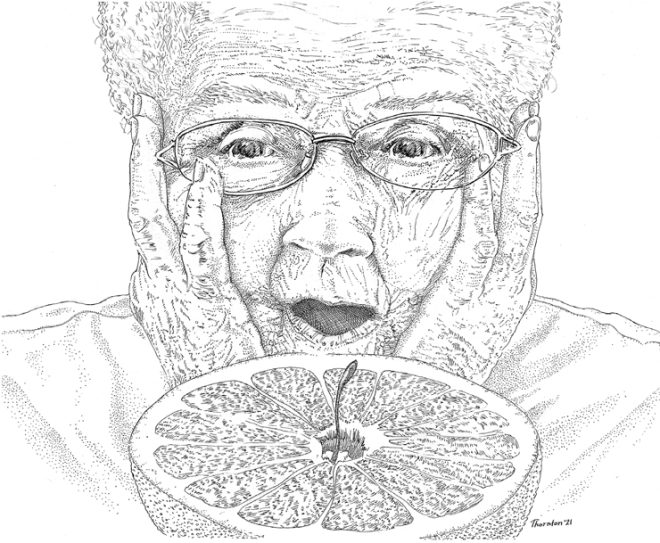 II tend to buy my organic fruit and vegetables from Whole Foods, and a couple of years ago I bought some beautiful organic grapefruit there. A few days later, I cut one of them in half, looking forward to a delicious breakfast of pink grapefruit, whole wheat toast, and a cup of Earl Grey tea. (My English roots are still strong, despite having left that foggy island 54 years ago!) Imagine my surprise and excitement when, upon cutting the fruit open, I discovered that one of its seeds had already sprouted—and was sporting a pale, gangly leg almost one-inch long! I gasped in delight and put my breakfast on hold.

There was no way I was going to heartlessly ignore this valiant urge to live. So after allowing myself a brief moment of rhapsody over such a miracle, a first in all my 74 years, I went into my garage and found a suitable 4-inch pot and some good potting soil, which I always have on hand, and proceeded to tenderly immerse the delicate thing in a soft bed of soil, murmuring words of encouragement and blessing all the while. That done, I placed it outside in my garden, under the protective leaves of other plants, instructing them to take good care of this infant.

One of its seeds had sprouted—and was sporting a pale, gangly leg almost one-inch long!

Imagine my delight when a little while later, a sturdy leaf emerged from the stem! I gushed over it, watched it daily, and eventually deemed it was ready to move out of the nursery and into a bigger pot. Accordingly, I placed it in a quart pot and watched it grow taller and sturdier until that, too, was too small and I had to transplant it into a gallon pot.

The following year it was flourishing. I put it into a much bigger pot and in full sun outside my kitchen door, so I could keep my eye on it. It grew (I pruned it ever so slightly to enhance its beauty and balance) and grew some more, until it reached a height of about three feet. At this point, she (no longer an “it,” at least in my eyes) was ready to go in the ground, into the big world. Although a grapefruit tree should be able to thrive outdoors here in Houston, I do not have a square inch of unused space in my small garden. I knew I’d have to part with her.

Earlier this Summer, I presented her as a gift to a young friend of mine who had just bought a new house with a big, empty garden. She was thrilled, I was thrilled, and the Whole Foods Grapefruit Tree was thrilled. She (my friend) informs me regularly that she (the tree) is growing in leaps and bounds. My friend has promised the first fruit to me, whenever that will be, which sounds very medieval, I know, but understandable in this case, I think. I just hope I’m still alive by then to enjoy it.

Now, every time I cut open a grapefruit, I wonder what I will find—what unexpected gift, what concrete proof of the abundance of the universe, will be presented to me. ❖