×
PHOTO SUPPLIED BY THE AUTHOR

All last year I wrote how much we missed our garden. Finally, after ten months, Spring and Summer having passed, we were able to move back home.

Sadly, it was too late for my darling husband and companion of 53 years. All those months at the hotel (while waiting for our burned house to be fixed), we had dreamed of sitting on the porch, strolling around the lawn at twilight, even, by then, watching, across the pond, the first autumn leaves change color.

But it was too late. Charles never recovered from the move, never was able to go outside even in a wheelchair, and died very shortly after we had finally made it home.

Charles wasn’t a gardener—the best possible companion for me, his gardening wife.

At least he did die at home, and he could lie in bed and look at the garden he had known for 72 years. He loved that garden. But he was not a gardener. I often used to think, though, that the fact he wasn’t a gardener made him the best possible companion for me, his gardening wife.

We often hear of two people (or more) caring for the same garden. We hear of arguments (and final truces) over where to plant the rhododendron, whether there are just too many tomato plants (and who is going to put them up?), and whether it matters if the purple and orange annuals seem to have come up adjacent to each other!

Not my Charles, who would say when a new shrub appeared, “Where do you want the hole?” Who ate everything and anything I grew in any form. Who thought purple and orange were “fun.” He even let me leave the prunings on the lawn for him to pick up. And he fed and talked to the hens, collecting pond-weed for them, and bringing in the richest eggs one could ever eat. He didn’t clean out the henhouse, though. I did that!

We would sit on the porch in the evening, and I would sigh about the weeds and the pruning and all the things I hadn’t done. He would say it looked beautiful and he didn’t see any weeds. Of course, he never actually weeded! His main job was mowing the lawn, which he enjoyed, carefully circumventing the weeds, including patches of hawkweed and dandelions. By the time he died, his lawn had hardly any grass left, between brilliant patches of flowers, like a living, changing tapestry. There was a lot of plantain, too! He would sometimes ask me the names of flowers and try to remember them—once proudly referring to “coreopsis.” (Well, he may have been pointing to something else, but who cared, anyway?)

My husband was much loved, not only by me, and his friends have rallied around mowing the lawn, blowing leaves, pruning, and generally helping me. The garden looks neat, neater than it ever did, and I’m so grateful to those friends. We’ll get it all sorted out one day, I hope—but there will always be something missing: the uncritical and loving gardening spirit of my “nongardening” husband. ❖

Contributing Editor and noted garden author, Diana has been writing for GREENPRINTS since Issue No. 5 (Spring, 1991). Her husband Charles was a noted sculptor and her dearest love and companion.

This article was published originally in 2018, in GreenPrints Issue #113. 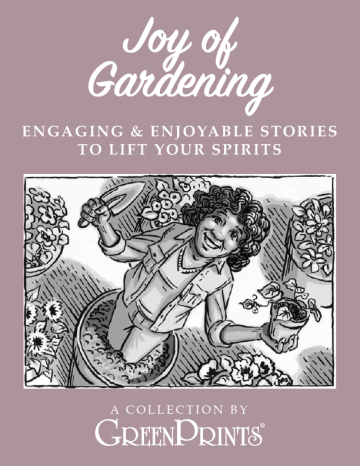