PPlants have feelings, just like people. So what happens when you feed one plant with compliments and another with negative remarks?” asked the Swedish company IKEA. IKEA—which otherwise devotes its time to selling furniture that you put together at home with tiny little Allen wrenches the size of paperclips—just attempted to answer this question with a plant-bullying experiment conducted in a Dubai elementary school. Kids recorded messages for a pair of dracaena plants, one batch filled with fawning compliments (“You’re an awesome plant.” “You’re making a difference in the world.”), the other crammed with insults (“You look rotten.” “You’re not even green.”).

What happens when you feed one plant with compliments and another with negative remarks?

The messages were played in a continuous loop, one plant exposed only to sweet talk, the other only to hurtful hectoring—while both received identical treatment in terms of nourishment, water, and sunlight. At the end of a month, the persecuted plant was stunted, drooping, and withered, while the praised plant was flourishing. It was an object lesson for the kids on the evil effects of bullying, IKEA pointed out, though scientifically I have my doubts. After all, I’ve been snarling “Wretched weeds!” at crabgrass and chickweed for years, without wilting so much as an invasive leaf.

The idea that chatting up your plants has positive (or negative) effects dates back at least to the 19th century. In 1839, British physician Thomas Henry Burgess published a monograph on the physiology of blushing, in which he claimed that people aren’t the only ones to cringe with embarrassment. Plants, just like us, when bombarded with socially hurtful “external impressions,” miserably shrivel up.

American horticulturists Luther Burbank, famed for developing dozens of varieties of plants, among them the Shasta daisy and the Russet Burbank potato, and George Washington Carver, creative genius with sweet potatoes and peanuts, both claimed that their seedlings benefited from loving conversation. England’s Prince Charles—you royal groupies may remember—when asked about his gardening practices, admitted, “I just come and talk to the plants, really. Very important to talk to them, they respond.”

Surely—just in case—it’s better to err on the side of talking.

In the early 20th century, Indian scientist Jagadish Chandra Bose reported that plants grew rapidly when exposed to gentle whispers and nice music, but were crushed and stunted by harsh music and loud speech. Bose also claimed that plants suffered death spasms. Playwright and vegetarian George Bernard Shaw is said to have been horrified by one of Bose’s experiments, in which a chunk of cabbage was shown to be gasping to death in a pot of boiling water.

Researchers admit that talking to your plants may just possibly be a good idea—but argue that there’s no real evidence that plants have humanlike feelings or give a flying hoot about what you have to say. In one telling experiment, conducted in 2004 by the popular television series Mythbusters, pea plants were grown under various conditions in seven segregated greenhouses. In two of the greenhouses, the resident peas were subjected to negative speech (possibly the evening news), and in another two, they were treated to upbeat, ego-building chatter. In a fifth greenhouse, peas were entertained with classical music; in a sixth, they got a steady dose of heavy metal. And in the final seventh greenhouse—likely the most popular among the monitoring gardeners—there was nothing but silence.

The results showed that the negatively and positively spoken-to peas did equally well, and both did markedly better than the peas in the silent greenhouse. Even better, performance-wise, were the peas raised to music, and those in the raucous heavy-metal greenhouse did the best of all.

Before you dash off to blast your garden with Metallica, however, just be aware that there’s more to the story. Sound is basically vibration, and vibration, some scientists argue, may just be the key to what’s going on here. Plants’ reactions to conversation and cantatas may mimic their adaptive responses to wind—that is, windy environments trigger the release of hormones such as ethylene that make for shorter, stockier, more wind-resistant plants. In other words, plants may interpret human-generated sound of all kinds as wind—which in turn triggers biochemical warning signals telling them to beef up structure and function in anticipation of tough times coming.

And not all results agree. Charles Darwin and his son, Francis, had a try at studying the effect of music on plants in a series of investigations that involved serenading mimosas with a bassoon. Subsequent measurements indicated that the mimosas couldn’t have cared less, and Darwin, probably red-faced and wilted, later described it as a “fool experiment.” On the other hand, in 2007, researchers in Korea found that two genes involved in a plant’s response to light—rbeS and Ald—are both activated by music, and the higher the frequency of the sound, the more dramatic the gene response. Perhaps the Darwins should have tried a piccolo.

So what to make of IKEA’s plant-bullying project?

Well, just for starters, nothing much. An experiment with only two samples can’t tell us anything reliable; we’re going to have to bully a lot more plants before we can have any confidence in the results. As is so often the case in science, we need more research.

One plant-lover claims that all this may be simpler than scientists hypothesize. Perhaps, she suggests, people who talk to their plants are people who like plants more and therefore take better care of them. In other words, people silly enough to talk to their plants just happen to be better, more dedicated gardeners. Maybe, maybe not. But surely—just in case—it seems better to err on the side of talking. And, since there’s still a lot we don’t know, it’s best to be nice while doing it. After all, a little moral support never hurts. It’s Fall. Here in Vermont the annuals are finished; the garden is done for the season; and the perennials are shutting down for a long Winter’s nap. We’re not going to see each other again for a while. I figure it wouldn’t be right not to say a few encouraging words of good-bye.

So Good luck, guys, I tell them all. Take care of yourselves. Keep the faith. See you in a few months.

Catch you on the flip side. ❖ 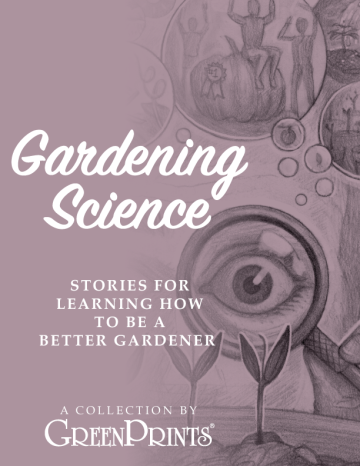