WWe were moving to the country, but I wasn’t scared. I’d read Out of Africa, so I had a pretty good idea of what to expect. I would be just like Isak Dinesen. I would become one with nature, growing obscure crops, nursing the natives, and writing books, probably in Danish.

We moved 30 miles from Austin to the Texas Hill Country, but it didn’t produce the rich inner life for which I’d hoped. The land was bad, and the main crop consisted of Big Boy tomatoes in oversized coffee cans. I met some of the natives. They mostly worked in the computer industry and didn’t require my help with their immediate medical care. I wasn’t sure how to go about being their friend. I spent a lot of time on the front porch, sweating in the Summer heat. The cars in the distance shimmered in the glare off the highway.

OOne day my husband and I sat on the porch, watching a bird swoop slowly across the sky. It never moved its wings. “Isn’t that some kind of hawk?” I asked. “It’s a turkey vulture,” Darrell said. I had read about vultures. Apparently, their main defense against predators was projectile vomiting. It was the kind of secret weapon that made snakebite seem friendly. Up in the sky, the vulture didn’t look disgusting. It sailed through the air on dark wings that were six-feet across. It made flying look easy.

I looked at the seed trays and feeders stationed around our porch. Our feeders only attracted small birds—hummingbirds, cardinals, and finches. I could imagine huge buzzards flapping down from the sky to our backyard. Maybe we could put up a feeder just for them and fill it every day with little scraps of meat. I could sit at the window and watch the vultures eat. Maybe they would get so tame that we could scratch their scaly little heads. I would be one with nature. 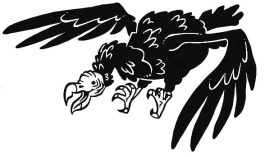 But wait. If we wanted to tempt vultures to eat at our house, we should provide them with a real banquet, not just meat scraps. And it was easy to find meat around here. Out on the highways west of Austin, there were more dead animals than telephone poles. I was sure we could find a few good specimens. Those vultures would line up to visit us.

Darrell, who had adjusted better to country life than I had, raised his eyebrows, but he built a platform in the yard close to the house. We had our scavenger bird feeder. All we needed now was the bait.

SSo that Sunday afternoon, we pulled up next to a big dead deer by the side of the highway and heaved it into the back of the car. I looked at it carefully. It certainly seemed juicy. If I were a buzzard, I’d eat that.

At home, Darrell slung it onto the platform, and we hurried inside the house. We crouched under the window to watch the vultures appear. Nothing happened. We waited a little while longer. Finally, we stood up. The vultures didn’t seem to care about their new feeder. Disappointed, we drifted back to the porch and sat fanning ourselves in our chairs. It was Summer. Hot.

We did not realize we had just committed three crucial mistakes, easily spotted by veteran scavenger birders. For one thing, feeding dead meat to vultures is viewed in the South strictly as a Winter hobby. For another, this is not the kind of project to expand from a few ounces of meat in the backyard to a large dead animal roasting in 95-degree heat.

Even Gladys looked horrified, in a doggy sort of way.

Finally, you should never put up scavenger bird feeders close to your house. This is especially true if your landlords, who are nice people and who are actually friends of yours, have just placed that house on the market. It’s hard to sell a house to people who have been knocked out cold from the stench wafting down the driveway.

By that Wednesday, the slab of deer on that platform turned ripe and we could hardly bring ourselves to go near the back of the house. The smell was incredible. I had been raised in the suburbs where dead animals were picked up from the highway the same day they were killed. I hadn’t really experienced the vast elemental forces of nature seen in the country—seen, for instance, in an 80-pound animal carcass rotting in the Texas sun. It was fascinating, if you didn’t mind having your eyes water. But it didn’t seem like we were having a birding experience as much as creating ground zero in some kind of gruesome new plague. Plus, it looked like that huge deer carcass would stay on the platform for a long time—the vultures had yet to even touch it.

On Friday, I decided that the predatory bird feeder had to go. I found a child’s sand shovel and a little red wagon in our landlords’ garage. The toys apparently belonged to their 6-year-old son. He was a broad-minded child. I was sure he wouldn’t mind if I borrowed his little playthings to transport the remains of a putrefying animal. My dog Gladys and I went forth with our new animal disposal equipment to take that deer down.

It wasn’t as easy as I thought. What had gone up in one piece didn’t come down that way. Even Gladys looked horrified, in a doggy kind of way. I loaded parts of the deer into the little red wagon and trundled it over the hill to another part of the property. It took several trips.

The smell of the deer filled the afternoon air. Gagging, I looked up and saw three vultures swooping down from the sky to examine the deer. “It’s too late, guys,” I said, breathing through my teeth, and upended a bottle of bleach over the platform. The vultures wheeled effortlessly in a circle, and with a lift of their wings, flew out of sight.

TThat evening Darrell set the platform on fire. We sat on the porch with a hose and watched it burn. “You know,” I said. “I think I need a hobby. I need some friends.”

Later, after a hard rain, we saw the vultures sitting high in a leafless oak tree. Their huge wings were outstretched, drying in the morning sun. They looked like a woodcutting from Paradise Lost—Lucifer and his dark angels looking down on Earth before their fall. They were beautiful.

We sat on the back porch and watched. From a distance. ❖