MMany years ago, the extremely horticultural expert (his license plate was in Latin and he had crossed out ‘make’ on his owner’s card and replaced it with ‘genus’) of a very well-known company that specializes in high-end perennials must have picked up the wrong list of garden writers (List One: For plant trials; List Two: For criminal trials) and so came out to my house to deliver two brand new specimens—a holly and a lilac. He quickly realized his error as he looked around at my easy-to-grow (i.e. ‘invasive’) forest of bearberry, mullein, wineberries, and multiflora rose, but it was too late—the plants were out of his car. (Although to his credit, he did try and wrestle one of them back.

He spun gravel out of the driveway, certain he was already covered in ticks and weed seeds.

The tag on the not-a-lilac read ‘BLUE holly,’ which I said I thought would be pretty cool-looking. “The berries are red,” he yelled as he spun gravel out of the drive way, certain he was already covered in ticks and invasive weed seeds and desperate to be next to a nicely pruned boxwood for an hour or so. “And it needs a male pollinator to have berries!”

At first I thought he meant me and hoped it was the deal with the little paintbrush because those leaves are sharp. But no, it turned out he meant a ‘male plant;’ which, like the rest of our sex is useful only for a very specific task at a very specific time and then hangs around the rest of the year looking decidedly un-ornamental—and my wife already has one of those.

But it wasn’t a bad-looking plant (I wish the same could be said for me) and it didn’t die after being planted (the sole requisite for inclusion in the outdoor funhouse I laughingly refer to as a landscape). It even produced a few berries after a couple of years—proof that there was either a ‘Blue Boy’ somewhere in the neighborhood or that Jeff Goldblum was right in “Jurassic Park.” [Editor’s Note: Don’t ask me. I didn’t get it, either!—Culturally challenged Pat] 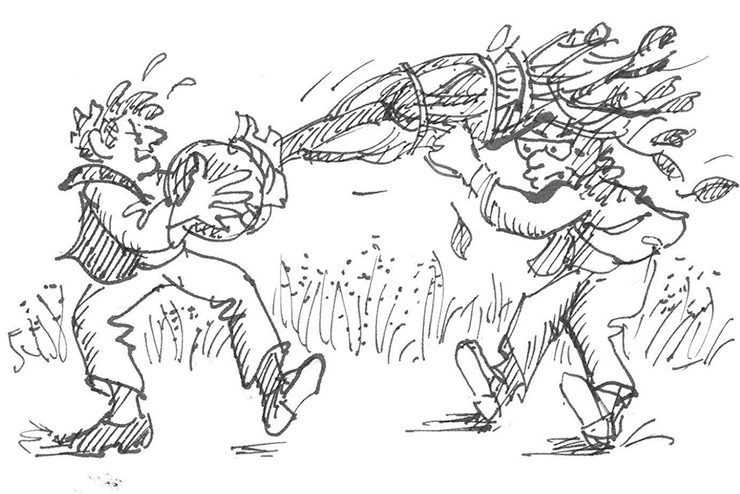 Some years we’d get more berries than others, but the plant was never really loaded. Still, I would wait for a good cold spell right before Christmas so I could safely prune some branches off and add them to evergreen cuttings to decorate our otherwise decidedly nonfestive outdoor containers of dead plants.

(And to bring one branch Inside because I knew the old lore that if holly enters a house before ivy, the husband will rule the roost in the coming year. Now I just have to figure out where the wife is hiding that ivy . . . )

Then there was the year we got heavy wet snow for Halloween and the holly decided to lie down and rest for a while. But unlike 20 or so trees in our immediate vicinity, it got back up again. (My neighbors think I finally got better at growing tomatoes the following summer; I tend to think it was the poor plants getting to move up to a blazing six hours of sun a day . . . )

The following year we had endless ice storms and the holly once again played duck and cover—so well that it wasn’t even apparent that there was a holly there until all of the plowed snow finally melted. I staked it up, told it I was sorry (I apologize a lot to my plants) and it produced a few berries that fall which I thought was remarkable for a shrub that months before had been the height of a box of Kleenex. A small box. The size they give you on an airplane. Wasn’t much to harvest, so I mostly decorated the dead planters with evergreen branches that year and brought the few nice holly stems inside to try and change my luck.

Where is that ivy? She must have it in a closet somewhere. Would it count if it was in her car?

Then came this past winter—or actually it didn’t. October was warm and November was sultry; the warmest on record. My forsythia bloomed, Spring bulbs started to pop up; and then I noticed that somebody had had a paintball fight in my front yard. No, wait—that’s the little-holly-that-previously couldn’t?! Every branch was covered in bright red berries, hundreds of them! Finally—my big chance! I’ll wait until a cold snap and then prune enough to put a sprig in every room of the house. I’ll hide some in her car, too!

So I wait. And I wait. On my radio show, I keep warning everyone not to prune for holiday decorations until we get freezing temps, but the forsythia is still wearing sunglasses and flip-flops long after we have grilled the turkey and sweet potatoes to eat at the picnic table outside on Thanksgiving.

And I keep looking at that magnificent holly—right out there in the center of the front yard flanked by two dead peach trees (well, one is ‘really most sincerely’ dead; the other one just got turned down for life insurance). Here it is December and I actually look like I know what I’m doing to passersby for a change! At least in the middle. “The others are sculptures!” (By a very disturbed artist . . . )

It’s easy to look good in Spring. You can’t kill forsythia; heck, the one we ‘removed’ and tossed in the woods years ago still blooms reliably every season (on its side, no less); and there’re 30 years of Spring bulbs popping up all over the place. Then come the roses that have been assured that they’re actually shade-loving plants (“Ha, ha; who writes those silly gardening books, anyway?”), and then the weeds fill everything in nicely. But now I’ve got color in December that isn’t coming from the 1960s plastic Santa with the 60-watt light bulb for a change! 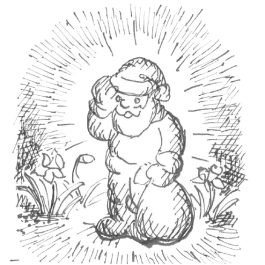 Then a dog walker comes by when I’m outside and goes “That’s the most beautiful holly I’ve ever seen!” Instead of telling her the truth (“That’s because you can’t see the actual wretched shape of the plant under all those berries.”), I say “Thank you” and decide two things:

• It’s never going to get cold again. (Time to buy that oceanfront property in Arizona!)
• It just looks so good out there where everyone can see it, I can’t bring myself to take off a single branch.
• I’ll never find out where my wife has her darned ivy plant growing, anyway

(Yes, that is THREE things. Math has never been my strong suit.)

Christmas comes and goes and every time I step outside I am newly impressed by the holly. (The same happened the year my wife hung CDs in the garden to keep the birds out of the raspberries. I think I was stuck out there for three days straight at one point.) Then finally the weather turns cold and the first snow of the season is predicted. But all of the weather-guessers are assuring us that the storm will “trend south” and D.C. will take the brunt, while our portion of PA will just get “a coating.”

Still, I make a run to the local hardware store—where I am immediately informed that my neighbors have been through predictions of ‘coatings’ before and so the store is out of shovels, sand, ice melt, and industrial-size rolls of toilet paper. I tell them that’s fine and go to the birding section to get the ten-pack of suet cakes I came in for. “Getting cold; finally time to feed the birds,” I explain.

Then I go home and fill up some suet cages to hang from my dead peach trees so that birds will get used to coming there and eat pests like the peach tree borers that killed them.

Then that night we hear, “Maybe it’s actually going to be closer to six inches.” Hang a couple more feeders. Wait, “Maybe eight . . . ”

Then, before they can explain why the ‘European forecast’ seems to know Pennsylvania weather better than people in Philadelphia, it snows for three days. When the neighbor with the plow finally gets dug out enough to get to our house, we have to play a game we have not played since the Blizzard of ’96—“Wait! Where’d we park the car?” It is slow going; days before we can drive anywhere, anyway; but the power doesn’t go out, which is kind of a drag as we have a woodstove and have come to enjoy snow camping. Instead we amuse ourselves watching America’s weather guessers paraded out in chains to be shamed on national TV. And then finally, four or five days in, we are out and about. 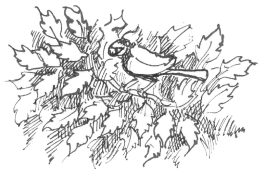 The feeders are empty. We had seen huge numbers of birds backed up at each one every day, like little airplanes waiting for their turn at LaGuardia, and never saw suet disappear so fast. The snow was still too deep in those areas to reach the feeders, but I had a few extra cages and a couple more cakes of suet, so I put that together and go out to hang them somewhere accessible—hey; like the holly; it’s close enough to the road to reach.

But I can’t find it. Oh no—flattened again?

Nope, just so brilliantly free of red it had turned invisible.
Then boom—one whole area is red again! No wait, that’s a cardinal. Plucking the very last berry

I sure hope Blue Boy stays in the neighborhood. ❖ 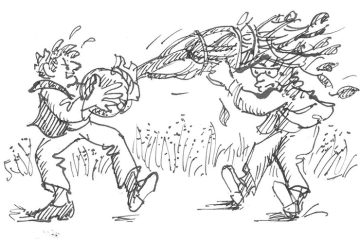