MMy husband Tim and I live next to a small lake in Minnesota. Migrating loons stop by our lake every April, hang out for a few days, hone their yodeling skills, and then leave to raise families elsewhere. Last Winter while we were in the throes of cabin fever, Tim and I decided that come Spring, we would entice a pair of loons to set up housekeeping on our lake. How? By providing them with a handcrafted, floating loon nest. 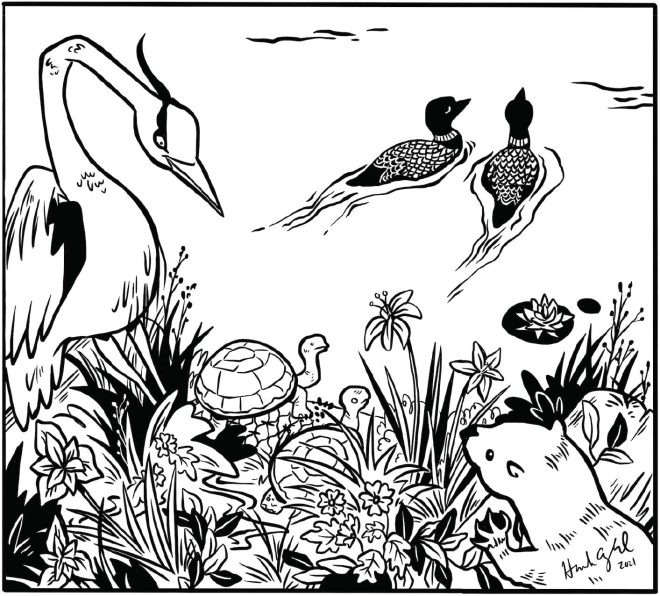 Constructing a loon nest consisted of several phases. The first and most comfortable phase was the idea phase, when cold snowy days sparked yearnings to hear the haunting calls of loons on soft Summer evenings. Phase Two was more strenuous, requiring a visit to the lumber yard and hoisting 8-inch circumference, 6-foot-long logs into the back of our hatchback. When we drove away from the lumber yard, we reflected that, well, maybe we did spend too much money for the logs, but those loons would be really grateful.

Finally we anchored the whole reeking mass in a place where no loon could possibly resist it.

Back at home, Tim and I wrestled the logs out of the car and rolled them down to the lake where we grappled and flailed until they were lashed together into a wooden frame. After applying liniment to our aching joints, we stapled wire netting to the insides of the logs. This took until sundown and marked the end of Phase Three. Aspirin and rest helped revive our dream later that evening, and, after all, the worst was over, right?

LLoons apparently prefer aquatic vegetable matter in their nests. This sounds bad but smells worse. When Tim and I started to rake old pond plants through resistant lake water, we began to suspect that the most difficult part of our project was just beginning. Balancing in a rocking boat and pitching trails of wet weeds onto a wobbly raft was a formidable challenge for two middle-aged, chilly, and increasingly soaked people. So Tim came up with an idea: “Let’s raid our leftover garden pile to fill in the gaps!” This pile consists of a collection of discarded garden plants and detritus. It sits at the edge of our yard where deer and rabbits nibble on its more succulent parts. Dried-up plants and old flower stalks were much easier to handle than slimy vegetation, so onto the top of the loon nest our garden leavings went.

Finally, it was time to tow our masterpiece to a sheltered spot on the lake. “Let’s take it over that way,” said Tim, indicating the farthest side of the lake. Once we were halfway there I suggested, “How about more over this way?” We towed it to one end of the lake, then to the other and back again, trying to settle on the perfect spot. Finally, by mutual agreement and a series of gymnastic maneuvers, we anchored the whole reeking mass in a place where no loon could possibly resist it.

EExcept that they all did. Not one loon that landed on our lake was impressed. That Spring our painstakingly crafted loon raft hosted sunbathing turtles and great blue herons. Otters munched sushi on the floating deck. Ducks napped on its logs while prospective loons sailed past, flipping their feathers dismissively. No baby loons sprouted from that loon nest.

Something else did. That midsummer, flowers appeared on our loonless structure. Spears of arrowroot and sedge had rooted themselves in the floating platform’s muck along with a few viable residents from our “leftover” garden. Siberian iris, forgotten daylilies, and mallow had snuggled in and come to life. They flourished on their new home, spending their days swaying above yellow water lilies and a clear blue lake.

MMaybe on some snowy day next Winter we can come up with a plan to make the flowering loon nest more attractive to our state bird. But, for now, the “loons” who built it think it turned out just fine.