IIam in LOVE with daffodils. Have been for years. Ahem! Make that decades, about five of them as an adult. I’m not sure I ever noticed the wonder of daffodils during my wild-and-woolly youth. But somewhere along the way to adulthood, they grabbed my attention.

What a bright smile daffodils bring to early Spring! Part of that is because they last for a while. I love crocuses, too. But not like daffodils. Crocuses are lacking because not as many grow, even fewer bloom, and those blooms are good for three days at most. And it seems they are never respectful enough to come back the next year. My daffodils always do!

“Guys!” I plead. (My daffodils are all guys.) “Can you grow a little faster?”

My daffodils have beautiful blooms for about three weeks. And either because I plant the right variety or just because of Mother Nature’s natural care, whether I pick a shady spot, a sunny spot, a spot that gets more moisture at the right time, or even a spot that gets more moisture at the wrong time, my daffodils always come through. They poke their little heads up as much as a month apart—giving me a joyous peak of continuous blooming for at least a four-week span.

My daffodils brighten my yard. They brighten my day. The world is congruent when I walk among the blooms.

Which brings me to Mother Hen. She is, well, me. Possibly you were unaware that males can be Mother Hens, too! I don’t know of anything else in my life that draws out this trait in me. Not newborn babies, nor too-big-for-their-britches-grown-up kiddos; not even brand-new grandchildren. But let me assure you, my daffodil bulbs, stems, buds, and blooms bring out my inner Mother Hen! 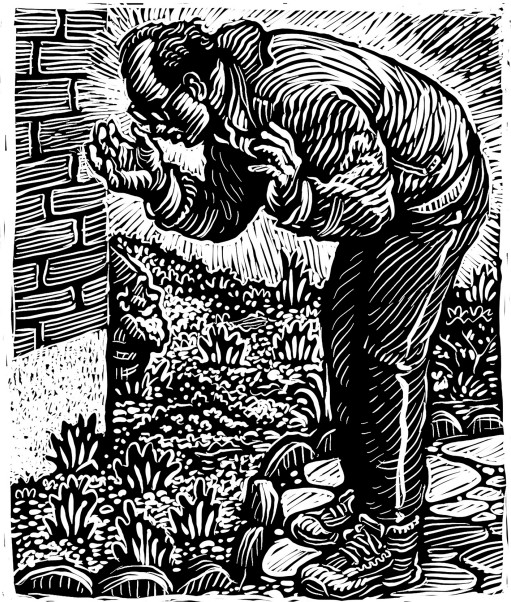 Here in Texas, I start walking the mulched area where my bulbs are planted sometime around the seventh of January. I might see the first telltale head reassuring me at least one is still alive around then—or surely within a week. What a joy to see plants coming up in my yard in January!

Last year, however, was a shocker. While I was cleaning up Winter limbs and leaves between Christmas Day and New Year’s Eve, I was astounded—-no, make that floored—to find my first tip of a daffodil leaf! Six more had given away their hiding place before midnight on New Year’s Eve. Never ever had I seen a sign of them the year before they were due! (Well, not a 12-month calendar year, but the calendar turning over from one year to the next year. You know, like the old jokes we all toss out to friends and family in late December, “See ya next year!” when it’s really only a day or two away!)

BBut my daffodils came up early last year! At least some of them. And twice, if not four times each day, I was outside patrolling the beds where those resided, searching among the mulch chips to see if the next newborns were crying, “Hey, Lou! I’m he-ee-r-ee!” Before January 7, I was already up to 48 sprouting daffodils—and looking for somewhere around 250 when they were all done.

Oh, and did I mention the flags? I didn’t? Well, you know the tiny colorful flags sold at any respectable hardware or home improvement store? The ones that are used to mark where a water or electrical line is buried, where we aren’t supposed to dig, or where we are supposed to dig? I set one where each green tip pokes out. After all, I don’t want to be walking all over any baby plants with my large frame as I patrol for more, now do I? That’s not being a protective Mother Hen!

After those green leaves first appear, the next excruciatingly long wait begins. “Guys!” (My daffodils are all guys.) “Can you grow a little faster? Can you put on buds a little quicker, so I can count how many blooms I will have this year? Can you blossom out a little sooner?”

“What’s the rush, Lou?” I try to tell myself. Before I know it, May will arrive. And by then, my babies will be gone. Gone until the next year.

Funny thing. Lots of animals hibernate in the deep of Winter. My babies hibernate in Summer. I wonder why that is. Maybe they like the Central Texas Summer heat and humidity just about as much as I do!

But Christmas will come again. And then next year … when I can start being a Mother Hen to my daffodils again! ❖