BBirds have always fascinated me. I keep a bird feeder or two (or three) and enjoy seeing who shows up for a meal. The showy cardinals, goldfinches, and blue jays are always a treat, and I listen for mockingbirds, rare in this area but not unknown. Tiny hummingbirds sometimes let me get close enough for a photo, but all the other birds fly off when I walk near the feeders. So I was very surprised when I was trimming dead branches from a pine, and I was approached by a chickadee! He looked right at me as he chattered away, then moved closer—about two feet from my face.

I fell in love.

Actually, his breast feathers were askew and he was so tiny I was certain he was a fledgling from a nearby nest. I even thought he might be mentally challenged, because what bird in his right mind would approach a big, scary human? I was the lady who put seeds in the feeders, though, and the urgency of his chatter made me think he wanted to tell me something important. Maybe he wasn’t happy with the selection. I searched online and discovered that chickadees like sunflowers, so I purchased a bag of hulled sunflower hearts and a special little feeder just for him. I knew the high oil content of the seeds would fatten him up in preparation for Winter.

That year a large flock of sparrows made our yard their home. I enjoyed their cheerful songs every morning, but there were about 100 of them and they ate a lot. The chickadee rushed in for its meal when I filled the feeder and the other birds fled. So I went there more often and chatted with him each time. As the year progressed, my little chickadee grew. I felt fortunate he considered me a friend.

What bird in his right mind would approach a big, scary human?

He didn’t just visit at feeding times, either. If he saw me in the yard or on the back deck, he sometimes perched near me and conversed in his language. I’d respond in mine. One evening while my husband and I dined on our deck, he drew close and peered at what we were eating. I was thankful it wasn’t chicken.

One day, I heard a pretty new bird song in the yard. It was simple but beautiful, just two notes—one high, one low. I searched the branches for this new, sweet-voiced bird, but saw none at first. Suddenly, my chickadee landed on a branch in front of me and sang the two-note song.

I imitated the whistle, though my version lacked the beauty of the chickadee’s. I practiced a bit more while he looked on. Since then, I use the whistle whenever I load the feeders. Of course, we don’t understand each other’s language, but I like to believe the love behind the words and twitters is the real language we share. 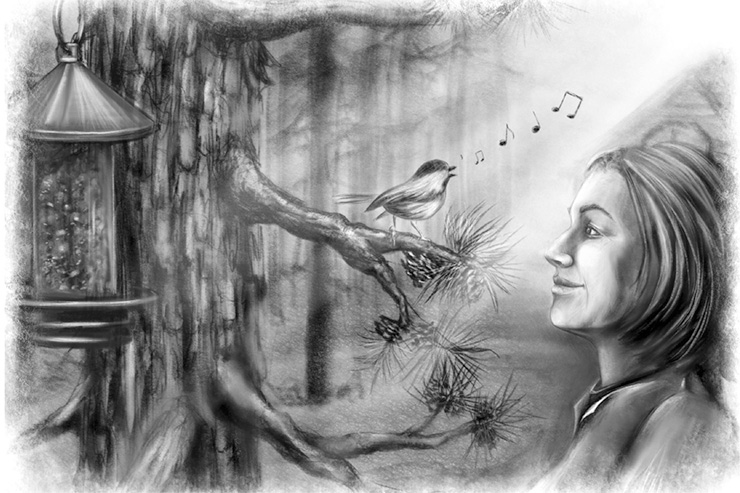 CCome Autumn I was confident my little friend had a good chance of surviving the Winter ahead. Chickadees do not migrate. This has always amazed me considering their small size. Instead, they cache their Winter food in hundreds of places, especially the rough bark of trees. I put suet feeders out, though, and kept watch over him through the cold months of our Michigan Winter.

Come Spring, I knew we were both happy to feel the sun’s warmth and see the snow melt. He was plumper and more confident than the little fledgling I’d met a year before, and it was not long before he found a mate. She came to the feeder one day with another bird, but the other bird flew on and she stayed. She was tiny, a fledgling with slightly darker breast feathers which were askew, like his were when we first met. She was shy at first, hanging back when he came near me, but she gradually learned I was not a threat. I wondered if they would build a nest their first year together and hatch a brood of chicks. I’ll never know because our happy little Eden was soon disrupted by a flock of grackles intent on taking over the yard and driving everything else out—including my spouse and me.

Squawking, they filled the trees and took over nests already filled with young robins. The yard was soon littered with dead baby birds. Grackles had visited our yard before, but never in such numbers. I didn’t realize they could be so evil. The robins fled and the chickadees relocated to a group of pines by the vegetable garden out back. One of the male grackles actually chased me! My spouse and I decided they had to go

It was easy to determine where the grackles’ stolen nests were located, as they squawked continuously. We quickly knocked as many of them out of our trees as we could reach. None of the nests contained eggs yet. The grackles relocated—you guessed it—to the group of pines by the vegetable garden. Our chickadees were forced to move once again.

Soon I heard a loud exchange between the chickadees coming from our neighbor’s yard. It was so intense I was afraid they were being attacked, so I hurried to investigate. When I arrived, I found Mr. Chickadee staring calmly down at me from a branch while Mrs. Chickadee jumped from one side of him to the other, the perfect picture of “hopping mad.” I left them after checking the area for predators and concluded she was angry about relocating again.

They sat so quietly as I spoke to them. I felt certain something was wrong.

They soon discovered it was safe to return to our yard, but Mrs. Chickadee got her hackles up one day when I walked within inches of her at the feeder. She didn’t budge from her perch, but scolded me for startling her. I made my apologies and retreated, vowing to never do that again. At least she had lost her initial shyness of me! Indeed, in later weeks she often flew in ahead of her mate when I whistled.

The chickadees usually sound very happy, especially when we meet after not seeing each other for a few days. Recently though, they sat so quietly as I spoke to them that I felt certain something was wrong. Looking over my shoulder, I thought I knew what troubled them. The farmer who manages our orchard had just removed all his apple trees in preparation for planting new ones next Spring. I wondered how much of the chickadees’ stored food was headed for the burn pile.

They don’t need to worry, though. I will continue to feed them through the Winter, and they must have several pounds of seed pressed into the craggy bark of our old maple tree, as well as the pines. This will be Mrs. Chickadee’s first Winter, but she has her mate to help her through it.

II still wonder how such small birds are able to survive our cold Winters, and I sometimes lay awake at night thinking about ways to make the cold weather easier for them. On one such night it occurred to me that, in a way, I’m God’s little chickadee. I started talking to Him when I was a young child. As I care for the little birds, I know He cares for me. I’ve felt His presence and love throughout my life.

And I know the chickadees feel mine. ❖