It was just too good to pass up! Of course, everything had been pretty much picked over. The remaining selection was (how can I put this nicely?) peaked at best and crispy at worst. The only thing that looked remotely like something I could salvage was a flat of sweet jalapeños.

But here’s the kicker.

My dad raised two things in his garden while I was growing up: tomatoes and jalapeños. That was it. We asked, no, we pleaded for a carrot or some beans. He would half-heartedly plant some and then proceed to forget about them. The tomatoes and jalapeños were also forgotten, but they tended to survive, even thrive under neglect (or at least here in Ohio they did). So every year we would choke down bowls of chili filled with those ever-loving tomatoes and jalapeños. It got to the point where chewing on my own leg like a trapped coyote seem preferable to another bowl of Daddy’s “famous” chili.

Maybe I felt sorry for them in their root-bound, wilted, semi-charred state.

So why I bought a whole flat of sweet jalapeños I have no idea. Maybe it was because I couldn’t pass by such a gosh darned good deal. Maybe because I felt sorry for them in their root-bound, wilted, semi-charred state. (Is this how crazy cat ladies get their start?) Maybe I just wanted to fill the gap left by the potatoes I’d harvested earlier that month. Maybe I’m more like my dad than I want to admit. Whatever the cause, a flat of sweet jalapeños found their way into the trunk of my car and into the back bed of the vegetable garden.

What had I done!?

Oh, well. It wouldn’t be all bad. I expected about a third to die within a week.

NNot a single one did.

They all hung in there, taking about a month to turn the corner and not look like bony little Halloween decorations, but after that they took off. I would go out two to three times a week and pull in about a gallon of peppers each day. I turned some of them into salsa, which I had to admit was pretty good and was usually eaten in a day or two, but I froze or gave away most of them.

My friend Bonnie, who was not traumatized by jalapeños in her youth, loved them. She said they were just the perfect mix of sweet and spicy. Not very hot at all, but with just the right amount of heat. She put them in everything, even snuck them in her husband’s omelets though he is a notoriously picky eater. Her praise of them was not unappreciated, but it still didn’t changed my own opinion of jalapeños.

Mostly I was just glad to have them out of the house. So Bonnie got gallons of them.

Why I froze them is another story. Why I would waste limited freezer space on something that no one in our family eats (except my dad, of course) is just mind-boggling. I mean we still have jalapeños in the freezer from years ago from Dad’s garden!

Drastic actions needed to be taken. I attempted to get the jalapeños to stop.

I stopped watering them. It would proceed to rain.

I stopped weeding their bed. The neighboring sweet potatoes decided to grow into their bed and shade out the weeds.

I called out to the local rabbits, asking for their help. They ate the broccoli instead.

As I picked my biweekly gallon, I would beg the peppers to cease and desist. I whispered to each plant, but they just kept right on producing. I guess they were so grateful for having their little lives spared the cruel fate of withering in small pots in the hardware store parking lot, baking on the blacktop, that they decided to return the kindness by producing as much as they could.

AAs I write this in mid-October, the peppers are still producing. Killing frosts will arrive here soon enough—the temperature is already dropping rapidly. Perhaps that will finally get them. But knowing these little survivors, a sheet will inevitably get thrown on them the night before such frosts.

Aw, heck! I’ll probably be the one to do it.

Postscript: Freeze that last image for a moment, the one of me throwing a sheet over the peppers—complaining about them and trying to protect them at the same time. 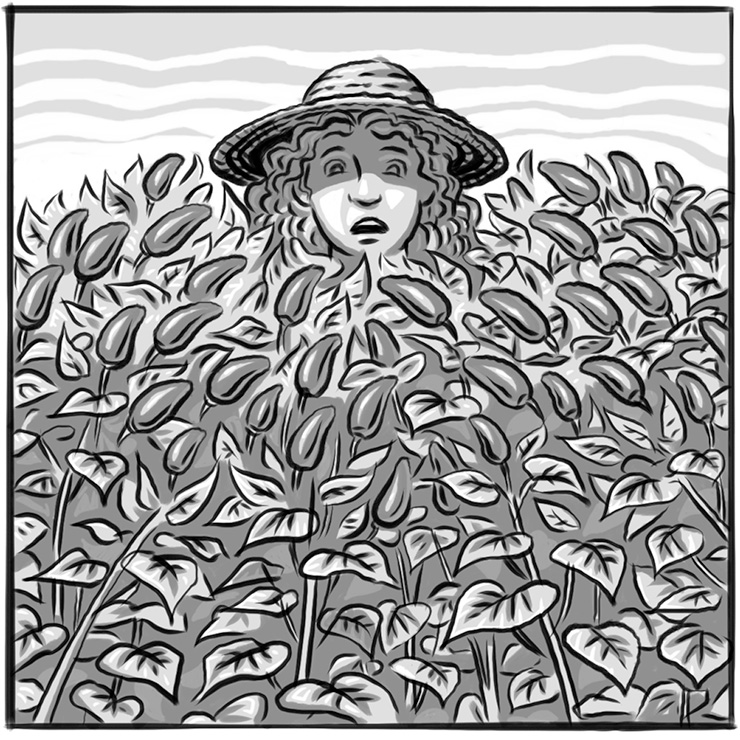 Look at it closely, and I think you’ll see the problem wasn’t the peppers.

I guess I’m just a sucker for a seedling with a sob story (or even more, a whole flat of them). And part of me thinks I should feel a little silly about being such a softie and making so much extra work for myself.

But wait: try this. Pull back a bit so you’re looking at that image from a little more distance. What do you see now? Here’s what I see:

You know what we should say to that?