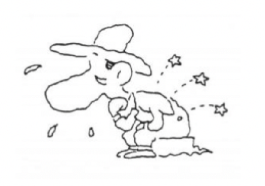 Some people are born gardeners, and some are not. When representatives from these two groups meet, they slam together like magnets, for some reason. There’s instant rapport:

As a newly recruited field hand, I soon discovered that sweat, like tomatoes, comes in quarts.

Sometimes they marry. The born gardener brings seed catalogs on the honeymoon, and the born nongardener is told stories of the art of grubbing in the dirt to make vegetables. Far into the night, they discuss mulch and fertility. Like vampires, born gardeners recruit fieldhands by biting their necks.

A newly recruited fieldhand myself, I would soon discover that sweat, like tomatoes, also comes in quarts. Hitched up to a one-person mechanical plow, I began my education in vegetable manufacture. Right off, I learned that it was easy to concentrate, zen-like, on one thought only while turning a hectare of hardpan into clods. “This,” I thought, “is hard work.” 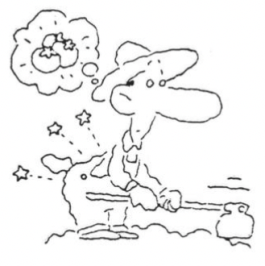 Slowly, our garden took shape. To my eye, it looked like loose dirt with expensive filth in it. But we worked an entire day to shape it, shoulder to shoulder. The next day, while the chiropractor worked on me from shoulder to shoulder, she planted. We spent that night discussing the little things that make a marriage, like surviving a coronary infarction and sharing the elephant liniment. The difficult part was over, she said. Now all we had to do was water and weed a few hours every day, and relentlessly kill every insect on earth. 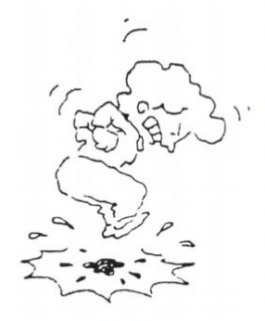 Perhaps many great thinkers have enjoyed murdering slugs and bugs, but I was quite content to let them live.

“But they’re eating our chard,” Joy said. Which brought us to our first crisis of opinion: My wife had planted many beds of debatable vegetables. Frankly, I had expected only an acre of tomatoes and three or four good-sized corn trees. Eating our chard didn’t strike me as a capital crime; and anyway, I added with an airy laugh, chard should only be eaten during wartime or famine. And ditto for turnips, double ditto for squash, and definitely ditto squared for daikon radishes.

She asked me to elaborate.

“Well,” I said, “let’s start with chard. Its very name sounds like a term for the residue left in the waste treatment pipes of a paper mill. And it tastes exactly like it sounds.” 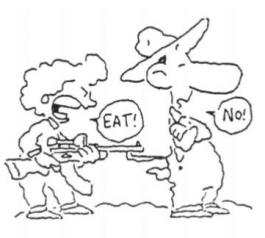 “And turnips: Children are forced to eat them solely for the discipline and vitamins, swallowing forkfuls of backtalk and grey turnip casserole. But they taste no better, 30 years later. The gun has not been invented which, when pointed at me, would cause me to suck on a turnip.”

“Nonsense,” she said. “As for squash, they are merely for giving away to the needy or suckers. Or you can slice ’em up, dry them, and eventually use them in compost recipes. Their orange flesh is only edible if drenched in butter and fed to the dog.”

I’m happy to report that we didn’t have a fight right out in the middle of the garden. That sort of thing shows no class at all. We went inside first.

The difficult part was over, she said. Now all we had to do was water and weed a few hours every day, and relentlessly kill every insect on earth.

Born nongardeners should be advised that a day of reckoning comes, spread out over several weeks. This is called “The Harvest.” Fears of tomato and corn shortages prove baseless, for even a small garden in the hands of a born gardener will yield enough to feed West Bangladesh. We picked and pulled and shelled and peeled and dried and canned and blanched and froze from can’t see to can’t see, and still the garden upchucked more bounty. We laid in a lifetime supply of turnips and chard and squash and zucchini, enough to gag every growing child in Christendom, and still it came forth. Even Joy was concerned.

“You know what we plumb forgot? Eggplant. Next year we’ll have to …” 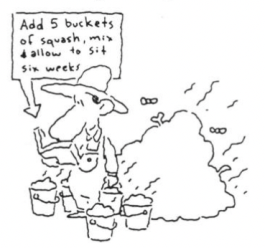 From my bed of pain and weariness, I looked up. My knuckles were swollen to the size of walnuts, and my body craved the solace of the grave. I had worked like a sharecropper’s horse, and so had Joy. Surely there was something else we could raise. Anything else would be easier than this.