TThe metal pig belonged to a neighbor. You could tell it was heavy because the wind and snow didn’t budge it. Ensconced next to a broken cherub, a squirrel, statues of cats, and even one of a rat, it made the alleyway special. All part of a design scheme that included a mosaic of mirrors, overgrown plants, a concrete turtle, and birdhouses painted in bright colors. It all fit.

The neighbors were good people, partially deaf. We chatted because we gardened. Sometimes over the years I also talked to the pig. Just to ask how he was doing, was anything new, what did he think of the election, all regular banter. The kind of common talk that makes a neighborhood a home. When the neighbors retired and moved out, they were rushed. The pig disappeared. It was missed. The alleyway wasn’t the same. Then one day in a quiet moment rehab workers were digging out the leftover brick and minor detritus in the alley, getting ready to lay down concrete—and I heard the word, “porcino” in Spanish.

They had the pig.

But my heart spoke and what came out was, “Porcino por mi, por favor, un regalo.”

I stuck my head across the alleyway and meant to say, “If you don’t need it, I can take it.” But my heart spoke and what came out was, “Porcino por mi, por favor, un regalo.”

They laughed, shrugged, and let me lug it away. Later they handed me the broken cherub and a round cat.

So it went next to our wall in the alley. My wife didn’t like it.

The young couple next door did, and they added a duck. And a stork found its way there. The new neighbors were young and asked for gardening advice. I started talking to them more than the pig. Some pots of lavender went up, and then sage. Things were clicking, and we needed room for the tomatoes. The neighborhood was changing. 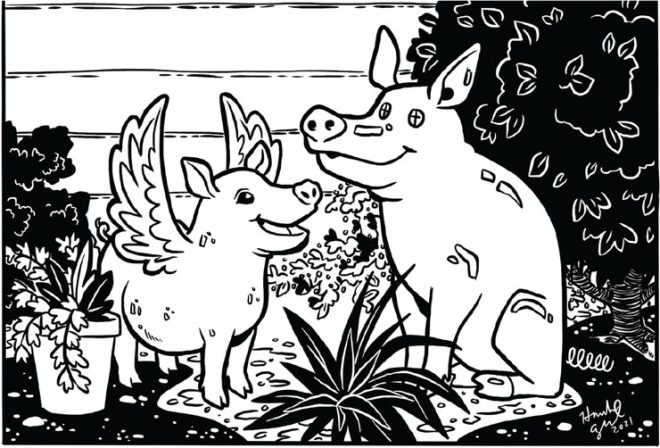 We agreed, painfully, that things should go, even the pig. So I started asking around. People liked it, called it a “garden folly,” “cute,” and “unique,” but they didn’t want it.

Then, one afternoon on a walk, I noticed another pig near a bench by someone’s front door. This one had wings and seemed to cry out in loneliness. So one morning before dawn, I trekked over with my 30-pound familiar. It got heavier each couple of feet and I had to stop twice to rest. I plopped it on their bench wrapped in a ribbon with a note: “I need a friend with wings.”

My wife said it was dumping, an invasion, and an assault.

Later that day on a follow-up walk we saw that it had been moved from the bench and placed next to the other pig, snuggled next to the concrete steps with the bow still wrapped around it, and cocked at an angle like they were nuzzling each other.

A woman walking her dog had stopped to say hello to the metal pig. She was asking how he liked the neighborhood. ❖