II was 10 years old when my father died. I was 12 when my mother died. That’s why I learned to hate the smell of flowers. There were so many flowers at both of my parents’ funerals that the smell of them almost gagged me. I would get a whiff here and there of the sweet Spring scent of a flower bouquet and my breath would catch in my throat. They did not bring comfort to me like they were supposed to do. Flowers saw my parents to their graves, and I hated them. 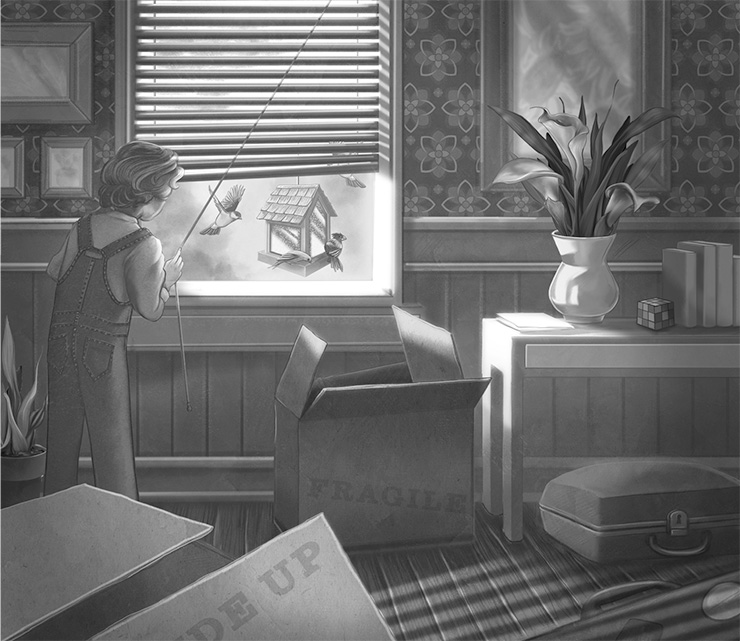 I was an only child. Now I was alone and had to go live with my Aunt Emily. I liked Aunt Emily, but I did not know much about her. All I knew was that she was an old maid. Nowadays the term “old maid” is considered an insult, but not when I was growing up. It was just a fact. Every woman was supposed to get married and if you didn’t, you were an old maid.

Finally I opened my blinds just high enough so I could see the feeder and the birds that dined there.

Aunt Emily owned a Craftsman house with arched doorways, beautiful etched glass windows, and a large wrap-around porch. It took me a while to get my room in order and to learn the routine of my new home. Aunt Emily was very patient with me. I had nothing bad to say about her—except that she loved flowers. I didn’t know what to do. I could not tell her how they made me feel. My aunt gave me a home. She gave a big bedroom with my own bath. She fed me, and she would raise me. How could I tell her I hated her flowers?

My bedroom window overlooked the expansive backyard and, wouldn’t you know it, there were flowers and vines and roses and shrubs everywhere my eyes could see. I closed the blinds to that window and did not open it again for a month. I never once went out into that backyard. I’m sure my aunt knew something was wrong. She invited me to help her garden on a few occasions, but I always turned her down. Eventually she even stopped putting flowers in the house.

My aunt also maintained a bird feeder that hung close to my bedroom window. Day after day I lay on my bed and listened to the birds singing, chirping, and scampering around. The lively sounds of those birds soothed me—and piqued my curiosity. What were they so excited about? Finally I opened my blinds just high enough so I could see the feeder and the birds that dined there. Aunt Emily caught me watching them one day and brought a pair of binoculars for me so I could get a better look at them. A few days later, she brought a bird book so I could identify the ones I saw.

I fell in love with birds. Then one day I saw a beautiful flash of iridescent red dart across the garden and hover at a vine flower. A hummingbird! It stuck its long, sleek bill in flower after flower. Then it darted over to another large-faced flower and flew away with yellow pollen stuck to its beak. I smiled with glee—and quickly became hooked on hummingbirds, as well.

I woke up in the morning with a peace I had not felt since the death of my parents.

But hummingbirds loved flowers. They depended upon them for their lives. How would I cope? My soul was conflicted.

Then one day, I couldn’t take it any longer. I just had to get a closer look at the hummingbirds and learn what kind of flowers they loved to sip. I tentatively stepped out onto the back porch—afraid of being nauseated by the smells of a funeral. I never left the porch on that first venture outdoors, but I did talk to Aunt Emily as she did some gardening.

My aunt told me that the vine the hummingbirds love so much is called a tangerine beauty crossvine and the big-faced flower that almost enveloped the tiny creatures is called a hibiscus.

TThat night I dreamt of birds and flowers. A blue dawn morning glory weaved its way throughout my dreams as a mockingbird sat on my shoulder, boldly calling as if to say, “There’s nothing to be afraid of any longer.” Black-capped chickadees and red-breasted nuthatches clung upside down to giant, buttery-yellow sunflowers searching for seeds. A male Allen’s hummingbird gracefully tangoed from one cardinal climber flower to another, content and happy with the nectar God had provided for him.

I woke up in the morning with a peace I had not felt since the death of my parents. I got out of bed, stretched, and opened the window blinds as high as they would go. I was instantly bathed in the brilliant colors of my aunt’s blossoming garden. And I knew, I just knew, that I would be out there with Aunt Emily before the day was over learning all I could about flowers—the flowers that graced my parents’ way to heaven. ❖