MMost noble endeavors of mankind have a patron saint, usually a man or woman who has achieved notoriety—often by torture or death—in a particular field or endeavor. In 303 A.D., for example, a woman named Barbara dwelt in Heliopolis, where she was decapitated by her father when she refused to renounce Christianity. He was thereupon consumed by lightning and she became the patron saint of firearms (if not the N.R.A.) and all accidents from explosions involving gun powder.

In 250 A.D., St. Apollonia became the patron saint of dentistry. Because she wouldn’t relinquish her faith, all her teeth were brutally removed, one by one, with a pair of pincers, and she was then burned alive.

“Fiacre, I will give you as much land as you can enclose with your spade in one day.”

Most patron saints have such lives.

Last month I went to a garden party and saw a sculpture of an Irish monk named St. Fiacre. The plaque below called him the patron saint of gardeners. Now I must confess that in over 25 years of gardening, I never really thought our craft had a patron saint, even though when walking through gardens and garden centers, I’d often seen statue after statue of a pious man in a cloak, identified by crude signs written in felt-tip pens as St. Francis, patron saint of gardeners.

Apparently today’s concrete casters and mild-mannered growers believe that our activity’s patron should be someone who had quiet thoughts and talked to birds. But I always dismissed St. Francis out of hand, since tradition would probably demand that gardening’s saint either have been buried alive, mauled by a pair of oxen while tilling bottomland, or at least an earnestly dedicated grower.

And it turns out I was right. Saint Fiacre, our real saint, was a wildman of gardening, a miracle worker who bargained with the church and had problems with a witch, and the patron saint of cab-drivers, as well.

Back in Ireland in the 600’s, various monks were sent to Europe to spread the word of God, among them Fiacre. Fiacre soon made a name for himself as a pious monk, but wished only to become a hermit. So the Bishop of Paris gave him a place of his own, deep in the forest and away from the monastery, where Fiacre retired to the great work of his life. He soon cleared a space in the woods and built an oratory to Our Lady and a small hut for himself. Then he began a garden. The garden, as is the wont of gardens everywhere, kept getting larger and larger.

Soon roaming hunters chanced upon the garden and were welcomed with open arms. They marveled to find such a place of plenty way out in the gloomy woods, and heard Fiacre preach and saw him heal, using medicines made from wildflowers and herbs. News spread far and wide. Fiacre was forced to build another hut

for the visitors and further expand his garden, and, of course, he ran out of land. So he went to the Bishop and asked for more.

The Bishop, knowing a good thing when he saw it, granted the wish, saying, “Fiacre, I will give you as much land as you can enclose with your spade in one day.”

Back to his garden went Fiacre, and taking some sticks, he surveyed the amount of land he needed and marked its boundaries, an amount far in excess of what one man could hope to enclose with a simple shovel in one day. Then he went into the oratory and prayed for help.

Now it so happened that an envious woman who lived nearby (she was probably an herbalist who, until Fiacre moved in, had advised all the peasants on their ailments and love lives) heard by the grapevine that he was up to something. So she hid in some bushes and watched the whole affair.

By the next morning, the monk’s prayer was answered. All the land he had marked was now encircled by spadework. The woman went straight to the Bishop and accused Fiacre of magic. But when the Bishop saw what had happened, he called the event a miracle and proclaimed Fiacre a saint. He was so angered by the accusation of the woman, he called her a witch and denied Fiacre’s oratory to all women, for all time.

Years later (I never found out if Fiacre died in the traditional grisly way or not), a great Benedictine Priory was built where the Saint had begun his solitary garden, and many wonders of healing were credited to his saintly relics. Then sometime in the 1600’s, probably as a result of population pressures brought on by urban sprawl, his remains were moved to the Cathedral at Meaux. There in 1641, Anne of Austria visited the shrine. She did not enter but remained outside the grating, mindful of the legend that any woman who went inside would go blind or mad.

Of course, with the passing of years, the misogyny of Fiacre (or at least of his shrine) has apparently been forgotten. Otherwise, many women gardeners today would be up in arms and ask that the job of patron saint be given to the same Anne of Austria for her dalliances in the garden with the Three Musketeers, or to Lucrezia Borgia for her knowledge of herbal poisons. 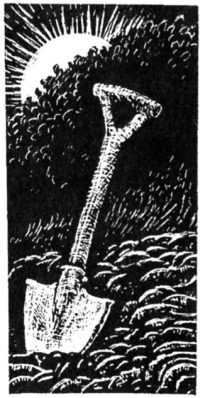 But where do taxi cabs come into the story? It seems in 1648, a gentleman by the name of Sauvage started an establishment that rented carriages—the sort of small, four-wheeled coaches hung with double springs. For the business, he bought a house in the Rue St. Martin called the Hotel de St. Fiacre that had a figure of the Saint over the doorway. Soon all the coaches of Paris were called fi acres. The drivers placed images of the Saint on their dashboards and named him their patron.

The tradition continues to this day, but judging by the taxi rides I’ve endured over the years, St. Fiacre has had far more influence on the gardeners of this world than the taxi drivers. ❖