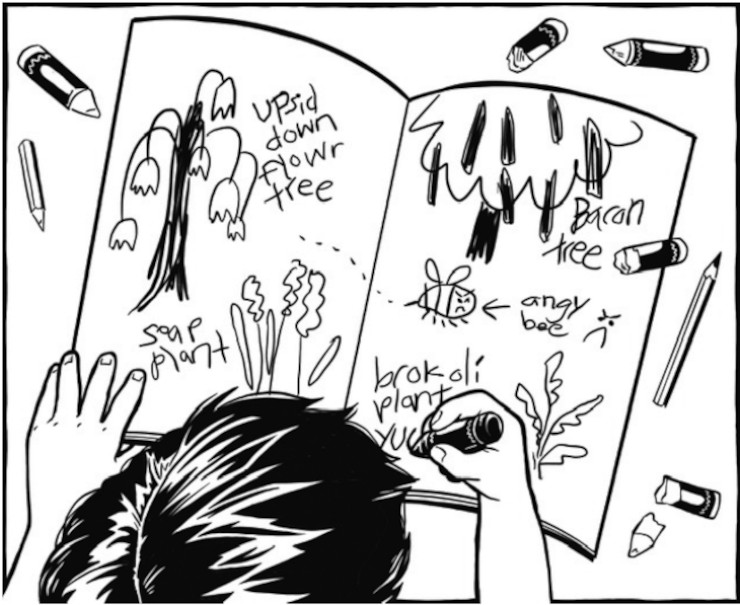 MMy wife and I were beaming. We were attending our first parent-teacher conference and receiving all sorts of accolades from Lance’s kindergarten teacher regarding our son. He was respectful, followed directions, knew all the vowel and consonant sounds, and colored within the lines.

Then, as we were preparing to leave, Miss Finn asked, “What exactly is an upside-down flower tree? I heard Lance telling the other children about it today.”

My wife and I looked at each other. “Haven’t the slightest idea,” my wife confessed.

So, of course, being Mr. Dad, I tactfully broached the topic with my star-performer son when we got home.

“How about that big one over there?” I asked. “That’s the bacon tree,” Lance said.

“Say, Lance. Your teacher mentioned something about a tree. An upside-down flower tree, to be precise.”

Lance looked up from the Grand Canyon puzzle he was working on, a bit put out by my interruption. “Yes, Dad?”

“Umm, well, could you tell me what she’s talking about?”

“The upside-down flower tree, he explained. “Out front.”

Lance led me out the front door and pointed. “There,” he said. “That’s the upside-down flower tree.”

“Oh, the trumpet tree,” I declared with a professorial air. “Also known as Brugmansia or angel’s trumpet.”

Lance shrugged and returned to his puzzle. I decided I should soon give my son his first botany lesson.

TThe next day was a Saturday. No work, no school, the perfect opportunity for father and son to explore the foliage around our house together.

“Do you recall,“ I began once I’d herded him outside, “the name of that tree?”

“Its formal name is trumpet tree,” I explained. “Now then, take a look at the large tree over there—the one by the street. Any idea what that one is?”

“You mean the squirrel tree?”

I was beginning to see that this wasn’t going to be easy.

“Yes, yes, there are squirrels in the tree,” I admitted, “but it’s a camphor tree. Just a minute.” I retrieved a leaf from the tree, crumbled it, and gave it to Lance to smell.

“That smells good,” my son declared.

“Yes, it does,” I agreed, going on to explain that the oil from the tree was used in ointments and creams. “Now then, how about that big one over there?” I asked. I pointed to a tree on our corner.

“Well, yes, I suppose those do look like strips of bacon, but they are actually mature seed pods. And here’s the interesting thing—those seed pods, when dried and roasted, produce a powder which is very similar to cocoa.”

But in the process, I had taken something important away from him.

“Precisely.” My tree tutorial seemed to be going well.

“So it’s a chocolate tree.”

“Well, no. Actually, it’s a carob tree. And only the female trees produce bacon … I mean, seed pods.”

Lance stared at me and said nothing.

For the next half hour or so, I identified trees, bushes, shrubs, weeds, and grasses. Lance had names for some, but to him most were simply things that grew around our house.

Then we came to one of my favorites. “Know what that one is?” I asked.

I surveyed the shrub, looking for any part that resembled a stalk of broccoli. Nothing.

“Because I hate broccoli, Dad.”

There was a long silence. I must have looked as confused as I felt, because Lance needed no prompting to continue.

“I was looking at one of the pretty flowers and got stung by a bee. Remember?”

“That’s when I decided to call it the broccoli bush.”

“Makes sense,” I offered, “but it’s actually called a gardenia shrub. And the ivory flowers have a delightfully sweet smell.”

“Maybe it’s time to wrap things up for now,” I said, sensing that Lance’s enthusiasm for botany was running a little low.

As we stepped up on the wrap-around porch, I noticed the potted herb we had given Lance, a bit of nature for him to care for.

“Ah, there’s the plant your Mom and I gave you. Looks like it’s doing well.”

“It smells just like Mom’s soap. You know, the soap in the guest bathroom we’re not supposed to use.”

I laughed. “That’s because Mom’s soap is lavender. This is a lavender plant, Lance, not a soap plant.”

BBy midweek, I noticed something peculiar.

Lance’s lavender plant was beginning to wilt. A quick check of the soil revealed the obvious. The plant was dry as the desert.

My wife glared over the rim of her glasses. “You should know,” she said.

“Lance told me that you gave his plant a new name. He said it isn’t his anymore.”

“That’s ridiculous,” I pleaded. “I just told him that it wasn’t a soap plant; that its proper name was lavender.”

“Ok, ok,” I offered, retreating, “I’ll talk to him about it.” I found Lance at the dining room table, working on a 1,400-piece puzzle of the solar system, the Grand Canyon having been completed and put back in its box.

I scanned the jumbled pieces on the table, wondering how a kindergartner could tackle such a seemingly impossible task.

“How about this one?” I said, picking up a red piece.

Gently, I placed the piece back on the table where I found it, lest I alter the makeup of the universe.

“Say, Lance. I noticed that your plant is looking a little dry.”

“Yes,” Lance replied, not looking up.

I upped my voice a couple of octaves and squeaked, “Lance, please water me. I’m thirsty, Lance. Please?”

Lance looked up, clearly not amused.

I tried again. “Lance, the plant will die if it doesn’t get water.”

“Ok, Dad.” He got up and padded outside.

I watched him through the dining room window as he filled the plastic watering can and gingerly poured water in a circular motion around the lavender, waiting for the moment that the water began draining into the saucer to stop watering.

At that moment, it hit me. I had tried to give Lance something that was important to me. But in the process, I had taken something important away from him.

“Hey, Lance,” I called out when he’d finished. “How about a little catch?”

Lance’s eyes brightened. “Sure, Dad. I’ll grab our mitts and a ball. Meet you out back.”

“No,” I interjected, motioning to the front with my thumb. “Meet me by the upside-down flower tree.”

Lance smiled broadly. “Sure thing, Dad. Be right there!”

IIt is called the angel’s trumpet, of the genus Brugmansia, the family Solanaceae and the kingdom Plantae. But at my house, it’s called the Upside-Down Flower Tree.

And it always will be. ❖ 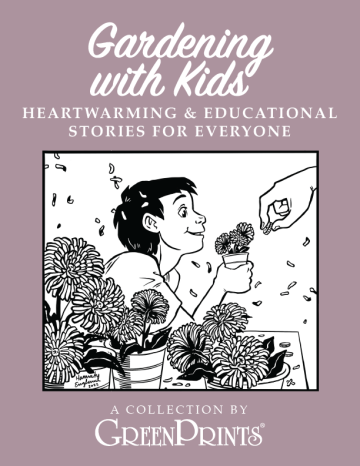