Hearing about new gardener mistakes is one of my favorite sources of laughter. Not because I like to chuckle at other people’s misery but because we’ve all been there. You need to have a little gardening humor and humility when you’re starting out. Whether you’ve picked 1” carrots, pulled garlic a whole season too early, or planted a flower garden right above a rabbit’s den, there are plenty of hilarious (but sad) mistakes to be made when gardening.

And if I’m being honest, I’m not sure there’s an end to it, because there are too many plant species to be an expert on them all and too many ways to make mistakes. Sure, plants by their nature want to grow, but they do have their preferences! For example, my northern friends tried growing those 30lb Georgia Rattlesnake watermelons for years before realizing the season would never be long enough for them (they’ve since switched to Sugar Baby watermelons with great success).

Today’s story, The Bronx Farmers by Irene Onorato was published in Issue #106, but I still think about it today and chuckle time and time again. In her story, after moving from New York to Florida, she learns the basics of composting, though the first set of instructions she gets from a helpful neighbor is unfortunately vague. What results is a lot of laughs and friendship in an empty garden. Keep reading for the whole story, I’m sure you’ll get a kick out of it too.

A Helpful Neighbor and a Little Gardening Humor

This story comes from our Gardening Humor archive that spans over 30 years and includes more than 130 magazine issues of GreenPrints. Pieces like these that inject gardening humor into everyday life lessons always brighten up my day, and I hope it does for you as well. Enjoy!

No more pesticide-laden food for us. That became our mantra when our first son was born. It was time to start a garden, grow our own earth-friendly food, and cook everything from scratch.

With the baby settled in for an afternoon nap, Jim and I went into the backyard of our rented house in Ocala, Florida. Shovels in hand, we began clearing the sod and breaking up the soil.

“June is kind of late for planting a garden.”

Wiping off sweat, we turned toward the voice.

“I’m Lela Mitchell,” a small, elderly woman said. She jerked a thumb at the house behind us. “My husband Jack and I are your neighbors.”

Jim put out a hand and introduced himself. I did the same.

Lela slowly walked around our new garden-to-be. She stopped on the far side and cast a glance at us. “Where’re y’all from?”

I hung my hands on the wooden handle in front of my chest. “Bronx, New York, originally.”

“Mm-hmm, mm-hmm. I see.” She gave a slight nod and sauntered on until she stood full before us.

“The ground ’round here is mostly sand. You’ll need to add some compost to the soil before y’all plant anything.”

Jim and I looked at each other, then at her. “Compost?” we asked.

Lela’s lips made a small smile. “Yes, compost. You know, a mix of leaves, grass, and food peelings. It’s like magic fertilizer.” 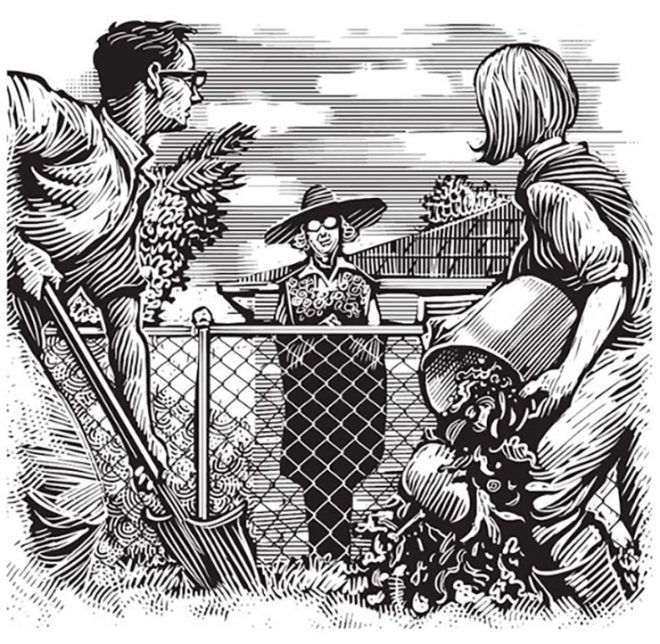 “Nice meetin’ y’all.” Our newly met agricultural goddess turned and ambled across the yard toward her house. She climbed onto her back porch and vanished through the screen door.

Jim found a suitable bucket in the shed. We put it under the kitchen sink as a catchall for onion skins, eggshells, potato peels—and anything else we could use in the garden. Every day for a week, we turned the soil and waited for the bucket to fill.

Late Friday afternoon, I decided it was time to tackle the task of making bread. I chose a recipe and assembled the ingredients: stoneground whole-wheat flour, sea salt, yeast, honey, water, and a little oil. Simple enough.

I measured everything into a large bowl and mixed it with a wooden spoon. Little by little, I added more flour, just as the recipe instructed. The dough started to come together and form a sticky lump. I consulted the book for the next step.

Knead dough on floured surface until smooth and satiny.

Knead? I flipped to the back of the book for a glossary of terms. There wasn’t one. I was going to have to wing it—and hope. I floured the counter and dumped the dough onto it. Fingers coiled, I clawed the warm blob like a cat tearing a sofa.

“Kneading the dough, I think.”

“Hi-Yi!” Jim started with a karate chop to the center of the dough. He pulled, stretched, and wadded the dough back into a ball—then picked it up and body slammed it to the counter. Thwump! A cloud of flour spread across the Formica surface like a dust storm in the desert.

I took over and folded the dough over itself a few times. Lo and behold, the surface took on a smooth, satiny sheen. With a satisfied grin, I greased a bowl, put the dough in it, and draped a damp towel over the top.

“We let it rise until it doubles in bulk, punch it down, and knead it one more time. After that, we put it in a bread pan, let it rise again, and then we bake it.”

An hour later, I took a peek under the towel. “Hey, Jim,” I called. “The dough’s doubled in bulk. Take a look.”

I balled up my fist and punched the dough. We hung our heads over the bowl and took a deep whiff. Noxious gas hissed into our faces. We jerked back, gagging.

“Whew! That smells terrible,” he said. “I think it went bad.”

Jim picked up the bowl and headed for the back door.

“Where are you going?” I asked.

“It stinks. I’m going to bury it in the garden.”

I opened the cabinet and grabbed the bucket from under the sink. “Wait for me.”

In the soft glow of the evening sky, I held the bowl while Jim dug a hole in the center of our garden area.

“Bombs away,” I said, then dumped the doughy torpedo into the hole.

Jim covered it with dirt and stomped it down with his foot. Before we turned to go, I handed him the bucket. Jim hauled back and broadcast the contents onto the garden.

We went to bed that night feeling glad that our putrid dough monster was dead and buried.

The next morning we awoke to Lela’s voice yelling, “Jaaaaack! Come out here. You gotta see this.”

We jumped out of bed and threw on some clothes. By the time we got outside, Jack Mitchell was standing in the middle of our garden, poking a mound of dirt with the toe of his shoe, one that jiggled every time he touched it. “What do you reckon that is?” he asked, looking over his shoulder at Lela.

“I got no idea,” she answered. “You’re gonna have to ask the Bronx Farmers.”

Jim and I walked over to Lela.

“It’s bread dough,” I said. “We punched it down after it rose, and it stunk like crazy.”

Lela slapped her thighs and burst into laughter. “It’s supposed to smell that way, silly.”

Then we looked around. Banana peels hung over the white strings Jim had set to mark the rows. Onion skins, eggshells, slimy tomatoes, and potato peels lay scattered everywhere. Our little plot looked more like the city dump than a garden.

When they finally did, they took us under their wings, overlooking our big-city ignorance, and taught us the basics of gardening—including how to make a compost heap that, over time, would decompose into rich, fluffy garden gold.

The only thing that grew in the garden that first summer was friendship. But it was nourishing, organic, and sown in the fertile soil of our hearts. ❖

By Irene Onorato, published originally in 2016, in GreenPrints Issue #106. Illustrations by Tim Foley.

Did you enjoy this story? I’d love to hear your humorous gardening stories too!

Composting as Therapeutic Gardening
Do You Speak in the Language of Flowers?