Do you grow your own corn? I’ve never had much luck. I’ve tried sweet corn and the jeweled popping varieties, but never have I been able to grow even one cob I could eat. I know I’m not alone in this, as most of my backyard gardening friends claim the same. The more corn you can grow, the better corn you’ll get, and my plot for corn just isn’t that big.

Unfortunately, the sweetest corn is the one that comes right off the stalk. If you’re a real corn grower, you know that, though if we’re being honest, some of the supermarket stuff isn’t that bad in a pinch.

But in today’s funny gardening humor story, Picking Corn, the author’s dad would disagree. I mean, I’ve never met a guy who walked into someone else’s corn field to get corn fresher than what was in his market, but to each his own! In today’s piece, you’ll get a chuckle out of a gardener who has left his corn field, but who still won’t settle for an hour-old cob of corn.

Gardening Humor For Anyone Who Grows Corn

This story comes from our archive that spans over 30 years and includes more than 130 magazine issues of GreenPrints. Pieces like these that inject gardening humor into everyday life lessons always brighten up my day, and I hope it does for you as well. Enjoy! 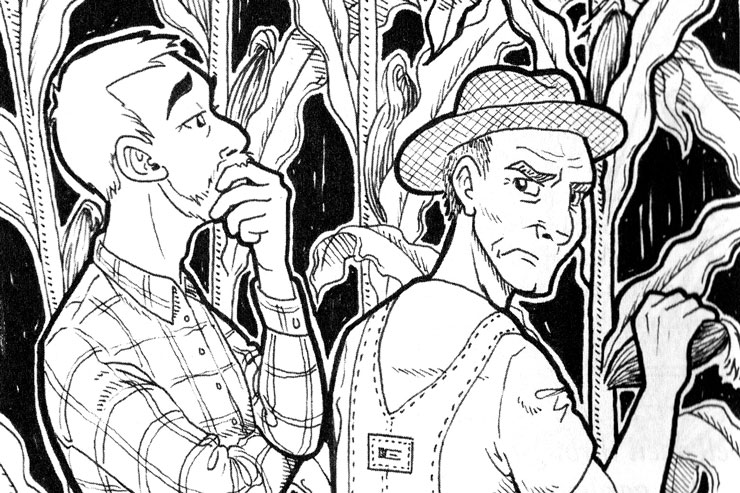 One of the things I miss most about my dad is his wonderful and slightly quirky sense of humor. I often think of my dad when I eat sweet corn.

When I was a boy, we had a small vegetable garden in the backyard. We grew all the usual things–radishes, cucumbers, tomatoes, and the like. We also grew sweet corn.

We normally picked our vegetables and gave them to my mom to prepare for dinner–but not with sweet corn. When it was time to get some sweet corn, my dad would first place a large pot of water on the stove and heat it to boiling. Then he and I would go out to the garden, pick and peel the corn, and head straight back into the kitchen to place it in the boiling water so that it was cooked as fresh as possible.

By Harvey Silverman, published originally in 2016, in GreenPrints Issue #102. Illustrations by Hannah England.

Do you grow your own corn, or have you in the past? What do you think: was this former farmer spot-on, or is hour-old corn fine enough?

Are You Harvesting Garlic Scapes Wrong?
The Joy of Gardening … Er, Weeding?