I only got one sentence into today’s piece, “My Okra Onslaught,” and I knew I could relate. The author, Jean Fritz, makes gumbo once a year, so they decide to grow their own okra, because why not? Well, I know how that usually goes.

I’ve made this gardening mistake time and time again. Usually, for me, it’s bell peppers. I love them, I cook with them often, but growing them in New England is a patient person’s game, and the payoff is getting all of the peppers at once and needing to juggle all the ways to use them. Cucamelons, that’s another villain in my gardening story, though they make a fabulous cover for an arbor.

I mean, sure, there are some fruits, like Eggplant, which make total sense to grow on your own, because the best-tasting varietals are rarely sold in stores, and they don’t all pop at once like peppers. The same goes for tomatoes. But you don’t grow eggplant just because you like one dish, like eggplant parmesan. Otherwise, you’ll end up waiting all summer waiting for your crop to make enough for your favorite dish, and it might not even grow all at the same time!

But today’s story revolves around the opposite of veggie famine: a bountiful crop of okra, also known as the crop that wouldn’t quit, and that they haven’t been brave enough to grow again since this story transpired!

Too Much Okra, Or Too Little?

This story comes from our archive that spans over 30 years and includes more than 130 magazine issues of GreenPrints. Pieces like these that inject gardening mishaps into everyday life lessons always brighten up my day, and I hope it does for you as well. Enjoy! 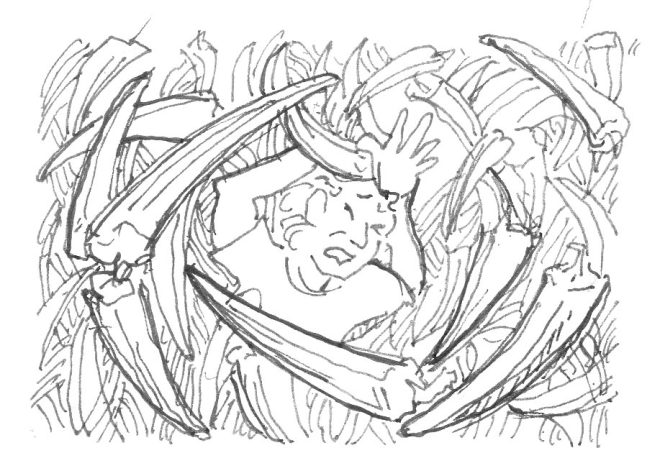 Once a year I like to make gumbo. One year I thought, “Why not grow my own okra for it?” I ordered the smallest seed packet available. Somehow they sent me their largest packet of seed. “Woohoo!” I thought. “What a bargain.”

I planted a 50-foot row—and got nearly 100 percent germination. That rarely happens. Then, here in Indiana, we got just the right amount of rain and perfect temperatures. The okra grew—and grew—and grew. The rows became 6-foot forests of okra plants. Within weeks, I was coming home from work every night and going right back to work—harvesting sackfuls of okra.

There were no farmers markets at the time, so selling it was not an option. I offered several neighbors sacks of okra. They’d been happy to accept my tomatoes, green beans, blackberries, and squash. But okra? After one sack, all I got was, “Thanks, but no thanks.” Even the rabbits, raccoons, and opossums passed it up. My neighbors thought I was a pest. Now the pests did, as well!

So I boiled, baked, fried, grilled, mashed, froze, and pickled the okra—everything short of baking it in a cake. But the more I ate, the more those plants produced. I even dried and spray painted pods for fall décor!

Frost eventually dealt the plants a deathblow, and they ended up as compost.

That was over 20 years ago. I haven’t grown okra or had one bite of it since. ❖

By Jean Fritz, published originally in 2022, in GreenPrints Issue #130. Illustrated by Marilynne Roach

Have you ever planted too much okra or another plant? Does this remind you of a similar story you’d like to share? Leave a comment below, I’d love to hear it.

Seeking: Plant Friends
The Life and Times of Growing Boysenberries