Some of my favorite stories from GreenPrints are between two partners in the garden, and some grand argument. Why is that? I’m not sure, but it always starts with one sacrificing a plant in the other’s garden, and for some reason that just makes me laugh. Today’s story is about a man and his Habanada pepper.

At our house, the garden is my domain, though I let my husband carry bags of soil and mulch every Spring. Cause, you know, I’m such a generous gal and all. Sometimes I let him help me turn the compost too. See? What a gem! By the end of the Summer, we’re loaded in vegetables, and that’s when I start to recruit my daughter to get picking. I guess you could say it’s a team effort, but it’s totally my garden.

In Let Me Have My Fury, I imagine our author is a bit like me, with grand ideas that there’s such a thing as one person’s garden. And when he plants a prized Habanada pepper plant in his wife’s garden, he learns that she might take that a little more seriously than he does. What we get is a fun story between two partners in the garden, with totally different gardening goals.

What’s My Habanada Pepper Doing There?

This story comes from our archive that spans over 30 years and includes more than 130 magazine issues of GreenPrints. Pieces like these that inject stories of gardening romance into everyday life lessons always brighten up my day, and I hope it does for you as well. Enjoy!

Let Me Have My Fury

Getting hot over a pepper. 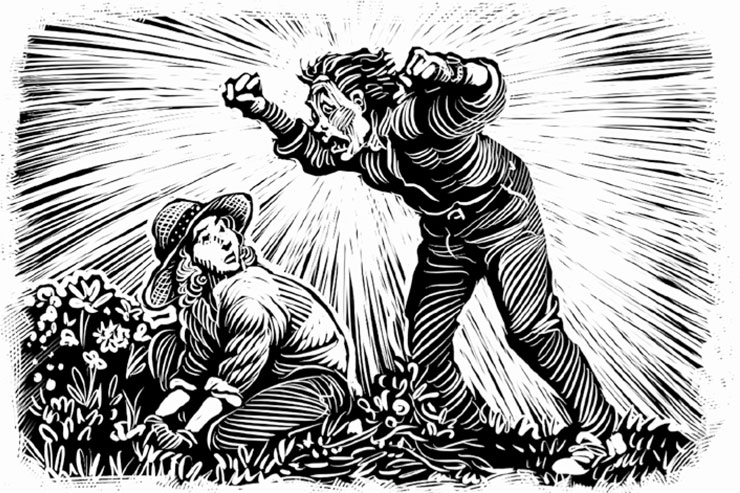 Out I went—and saw that my wife had plucked my Habanada pepper plant from the ground—it was wilting in the debris pile! I stormed into the house and yelled, “You pulled my pepper plant!”

“It was the only plant of mine that was there!!!” “Why are you so angry? OK, I made a mistake, but your reaction is a little over the top.” It was at this point that I uttered one of the most remembered and now-laughed-at lines in our 16-year marriage: “Let me have my fury!”

Dear Reader, she, she—she laughed at me. That, of course, made me all the more furious. I didn’t speak to her for several hours. I made an attempt to replant the poor little thing, but it didn’t survive. I’m going try to grow a Habanada again this year. But not in the front garden—oh, no. In addition, I’ll wrap barbed wire around it to protect it from my partner.

Was the habanada pepper worth the fight? Do you have a funny story about you and your partner in the garden? I’d love to hear it!