Did you know that a festival in Buñol, Spain, called La Tomatina is one big tomato fight, meant entirely for the fun and joy of throwing tomatoes at one another? It’s part of a week-long celebration to honor the town’s patron saints. A cannon is fired, and the tomato-throwing begins. It sounds like a blast! But who is growing all the tomatoes? What do they do with all the tomato remains? How BIG is that tomato compost pile? I have so many questions!

Today’s piece, The Great Tomato Fight of 1957 doesn’t take place in Spain, and it’s a bit smaller of a tomato fight, but when one grandson and one grandmother get into it, hilarity ensues.

I also love that this piece bestows some gardening wisdom from author W. Dean Marple’s grandmother. From the types of beans that perform best to her favorite tomatoes. I don’t know about you, but I love skipping a few steps when trying out varietals and hearing everyone’s tried and true favorites!

Keep reading for the full story, from wisdom to a grand tomato fight.

A Tomato Fight for All Ages

This story comes from our archive that spans over 30 years and includes more than 130 magazine issues of GreenPrints. Pieces like these that inject stories of gardening with kids into everyday life lessons always brighten up my day, and I hope it does for you as well. Enjoy!

The Great Tomato Fight of 1957

The day Grandma and I had it out. 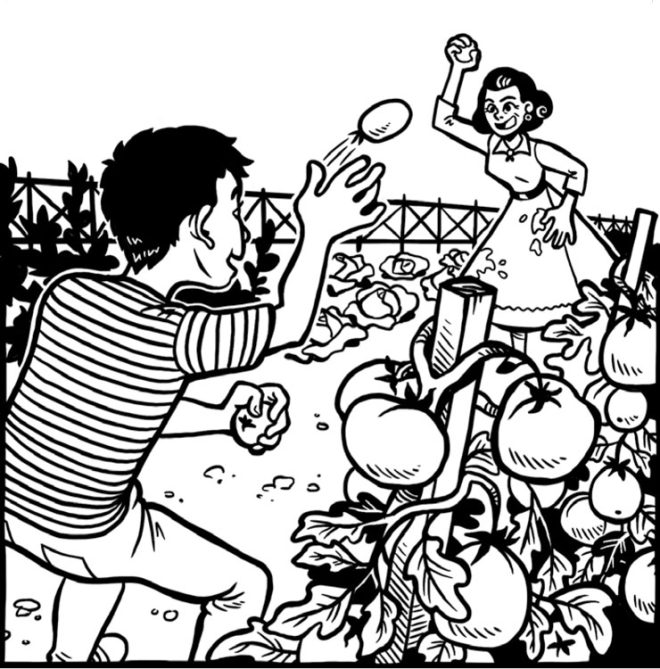 Warm and fuzzy were not two adjectives used to describe my grandmother. With two rocks in her apron pocket, she might have tipped the scales at 100 pounds, and she stood six feet—minus eleven inches. A big woman she was not, but she made up for it with a sharp tongue that did a rattlesnake proud and a wagging finger that usually ended up under someone’s nose. Some people said my grandfather carefully pondered his words before speaking. Others just said he was scared.

But to my nine-year-old self, she was just Grandma: the lady who taught me how to garden. A smart gardener, she planted Kentucky Wonder bush beans instead of the Lazy Lady variety because the time of Summer that brought iced tea—and too much heat—hit before the slow-growing Ladies set a good crop. While others moaned about the damage cucumber beetles did to their cucumbers, Grandma had few problems due to the trap crop of squash she planted around the garden edges about a week or two before she planted her cucumbers.

“But Grandma,” I’d say, “Why plant something the bugs are just going to eat?”

“Because mushed-up squash tastes like crap, but a crunchy pickle is good eating,” she’d reply. Not being particularly fond of, uh, crap, I thought her answer made perfect sense.

But more than purple beans or green cucumbers, Grandma’s pride and joy were her red tomatoes. By her side I learned how to plant transplants deep, how to prune indeterminate plants, and how accidentally stepping on a seedling resulted in Grandma’s use of a word I thought meant something that beavers built.

Plant, hoe, sweat—it was dirty work, but for chin-dribbling juicy taste, well worth it. Little Tommy Toes that looked like toy tomatoes, big Mortgage Lifters with their story of saving a home, and Grandma‘s favorite, the towering Brandywine tomatoes that she tied to eight-foot steel posts, then enclosed in a cage of fencing wire. Those Brandywines were big, odd-shaped, and heavy for a nine-year-old picker.

This last whine drew a death stare glared in my direction, and I grew silent. Soon, though, I had formed a plan. Eating was not the only thing I could do with a tomato. Grandma had her back to me, wicker basket by her side, bent over it as she selected tomatoes for canning. Shifting slightly in the afternoon breeze, the print pattern on her cotton dress made a very tempting target. Unable to resist, I let fly with a small tomato. No response—the tomato sailed wide, and Grandma didn’t even know I threw it. Time to ramp up my game.

“Look out!” I yelled as I let fly with another red missile. Hearing my shout, Grandma stood and turned just in time to introduce her forehead to one very juicy tomato. Pulp, seed, and juice trickled down her face, dripped off her nose, and covered the front of her dress. I thought I was dead. I could just feel a small blue-veined hand clamping down on one ear and marching me to the house where justice would be administered. Swiftly.

“You little bugger,” she sputtered, wiping tomato off her mouth. Then, to my amazement, she grinned, stooped down, grabbed a tomato, and fired it back at me. “Yah, yah, you missed!” I taunted. “You throw like an old lady.” “Old lady? I’ll show you how an old lady throws.” She proceeded to bury a big, old Mortgage Lifter tomato in my right ear. It was on.

Younger and faster, I fired three cherry tomatoes to each one of the whoppers she was pitching. I threw, she hollered; she threw, I yelled. Soon we were pitching tomatoes as fast as we could and laughing with each toss. It was all fun—until her last magnificent throw.

A beautiful throw that one, it must have traveled at least 40 feet. She fired it like a rocket, and I could feel the whoosh as it sailed over my head. Then her expression changed, and she stopped throwing, which made me turn and look behind me. Fluttering on the clothesline, a large, formerly pure white sheet now displayed a red starburst pattern that seemed to grow with each slimy drip. Before I could even turn back, I heard the snarl, “Look at what you made me do! Get your little behind over here right now.” Getting my little behind anywhere near the vicinity of Grandma was the farthest thing from my mind at the moment. Even though my parents’ farm was a mile and a half away, I nervously called out, “Got to go, I hear Mom calling me.” 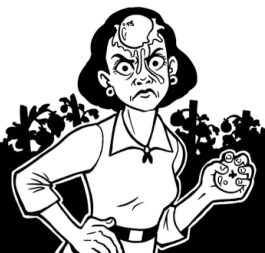 “You little twerp, you know you can’t hear your mom. Get over here.“ But by this time Grandma was talking to my back. I was over the garden fence, across the yard, and going down the gravel road toward home. I’d seen that wrath-of-God look on her face, and you didn’t mess with God. It turned out that God could do more than look vengeful. Grandma hiked up her dress, scrambled over that fence, and came marching down the road. I started walking faster. So did she. I broke into a slow lope. On she came. Seeing a small hill ahead, I decided to charge up it as fast as I could and leave her behind. Cresting the hill and out of breath, I paused, hands on knees, breathing hard.

“Wait, hold on.” Looking up at the sound, I saw Grandma, wheezing and wobbling, coming up that hill. She wasn’t moving very quickly, but she was moving.

“OK, OK, I’ll wait,” I panted. I was tired and convinced my life would end right there, in the middle of the road. Might as well get it over with.

Trudging up to me, Grandma was a mess. Her hair was everywhere, she smelled of sweat and tomatoes, And her dress showed tears from the fence climbing. At best, I expected a furious tongue lashing. As she came up, I braced myself. The last thing I expected was the tomato that slipped from her dress pocket to her hand and down the front of my shirt. Grinning, she wrapped me in a fierce bear hug, smashing the tomato, and whispered in my ear, “That’s the most fun I’ve had in years. Thanks, squirt. ”We walked back to her house hand in hand. ❖

Do you have a funny story to share about gardening with grown-ups when you were a kid? I’d love to hear it!