I love when people are able to share their most somber therapeutic gardening stories with us. One story I always remember when I’m composting is this piece by Cathie Desjardins called “Recycling Herself” which is about Cathie’s love of composting, intertwined with a story about her mother who passed.

In her piece, Cathie talks about how everyone supports her love of composting. “I bring home peoples’ apple cores and banana peels from work, and I collect our neighborhood’s disintegrating pumpkins after Halloween,” she writes, noting that her neighbors will even leave their rotting pumpkins at the bottom of her driveway throughout November.

But the real revelation for Cathie isn’t in the composting itself, which she decides is easy, it’s the way her mother chooses to carry on her legacy, despite spending her life seeking perfection and approval, and (I assume) compost-adverse. You’ll see what I mean as you read her therapeutic gardening piece below, which I think you’ll find quite heart-warming. 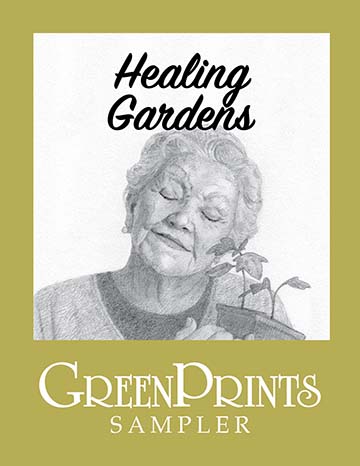 Download our FREEBIE, GreenPrints Sampler: Healing Gardens today and read about the power of a healing garden to offer hope and soothe a broken heart.

When Therapeutic Gardening Does Its Job

This therapeutic gardening story comes from our archive that spans over 30 years and includes more than 130 magazine issues of GreenPrints. Pieces like these that inject the power of healing gardens into everyday life lessons always brighten up my day, and I hope it does for you as well. Enjoy!

Will I ever be as brave a composter as my mom?

Standing next to my compost heap, I wondered if I was the only person on the planet who would find calm and healing in emptying out white plastic bags of leftovers onto my compost pile. Out tumbled stale Ritz crackers, bags of peas and cranberries from my mom’s freezer, stale dregs of rice and flour, ten days’ worth of coffee grounds and veggie peelings from a full house of visitors, used teabags and ancient unused ones—all topped with wilted floral arrangements from well-wishers. I shoveled on some dirt and sprinkled over everything with the ashes from a neighbor’s fireplace, their grey mist and nuggets swirling around.

I didn’t have my mom’s ashes, and wouldn’t for a while. A few hours after she died, two guys with a rolling pallet had come to take her body to the university medical center. My mom had become an advocate for medical research when my sister was diagnosed with schizophrenia in her 20s. She’d always told me she thought if more people had been willing to donate their brains for research, a breakthrough might have happened for my sister while she was still alive.

Now, after a memorial service and clearing out her condo in Pittsburgh, I’d come back to Massachusetts and was dumping the debris I’d lugged 600 miles in my Subaru. In the 11 months after my mom’s diagnosis with ovarian cancer, I’d flown down a dozen times to be with her for treatment. Then I took family medical leave for her final weeks so she could die at home. I’d come to know her life there, her friends and routines and neighborhood, in a way I had no inkling of before. 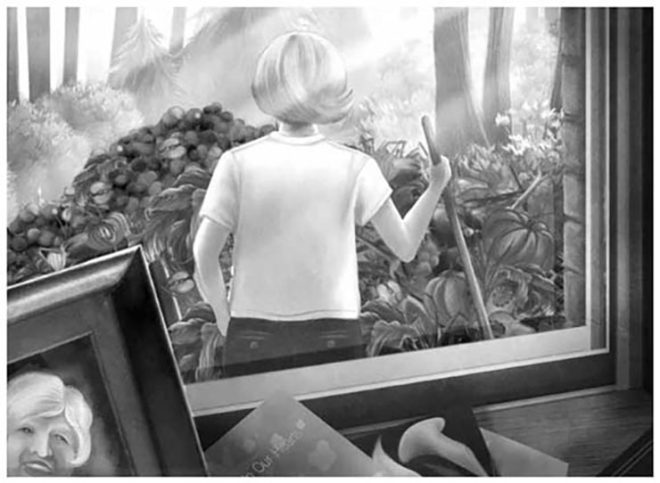 That’s not quite true. Some things were predictable, knowing my mom. I knew I’d find her condo immaculate, with paintings and art pieces that picked up the tone of the furniture, and her Dustbuster at the ready near the kitchen counter. I knew there wouldn’t be a single smudge on the off-white wall-to-wall carpeting.

I’d been the black sheep of the family, the one most likely to track in dirt across my mom’s pristine carpet. One way or another, there’s always grime under my fingernails and crud wedged in my shoes. When I moved into a New England suburb with my husband 17 years ago, the lawn vanished under bee balm and roses and pea fences and pumpkins. And a compost pile out back. Two piles actually: one breaking down and one good to go.

Composting keeps me sane in a world where our landfills and oceans are filling up with junk. I bring home peoples’ apple cores and banana peels from work, and I collect our neighborhood’s disintegrating pumpkins after Halloween. (By now, people routinely drop them off at the bottom of the driveway. I never know what melting macabre chorus will be waiting for me when I come home on November days.) Composting is my own small attempt to restore a little order to the universe.

I remember my puzzlement when we moved to the suburbs in fourth grade and my mom was ecstatic about her new garbage disposal. My mom had a special tool in her kitchen drawer just to unclog garbage disposals. To me, this added to the ridiculousness of the device: a garbage disposal that wouldn’t take garbage. I never did get straight what was and wasn’t OK to put in it.

When I went to see my mom during her chemo treatments, I tried hard to do things her way. Nothing like a terminal illness to simplify the rules. If she wanted to go to the movies, we went. If she wanted Jell-O pudding with raspberries, that’s what she got. If she wanted to discontinue chemo, that’s what we did. Dr. Phil at 3:00, Scott Pelley at 7:00, and I knew to plan Sunday dinner around 60 Minutes. She got to say because the end was near. The end, when all she wanted was ice chips and a way out.

I manned the Dustbuster when people cluelessly tracked in dust. I was chief cook and bottle washer, too, trying to master the most efficient way to load her dishwasher. But every time I put an eggshell down the disposal it was with regret: another drop of regret that plopped into the big ocean around my mom’s dying.

I have photos of my mom out having lunch with what I call her Gal Pal Posse three weeks before she died. She is the one in the snazzy black-and-white jacket with a big smile. You would not pick her out as the one at death’s door. Impeccably groomed, she’d cheerfully announce, “I’m vain,” to anyone nearby.

Mom had kept up a great front as long as she could. It wasn’t until I was standing next to my compost pile that I realized for the first time just how astonishing what she had done was. My mother, who had spent her life caring about appearances, teaching me accessories had to match (and so did your lipstick), had given her body away to strangers when she was done, hoping it might somehow help others. It doesn’t take courage to recycle peelings and weeds. But to recycle all that’s left of you the way she did? I wonder if I will ever be as brave as she was. ❖

By Cathie Desjardins, published originally in 2018, in GreenPrints Issue #114. Illustrations by Christina Hess.

Did you enjoy this story? Do you think gardening is therapeutic? I never thought composting could be until now!

Download our FREEBIE, GreenPrints Sampler: Healing Gardens today and read about the power of a healing garden to offer hope and soothe a broken heart.

A Gardening Poem About Thyme
A Sprout of Gardening Humor Straight from the… Compost?