When I think of going back to the days of apartment gardening, a chill runs up my spine. Maybe it’s because I always had small porches or none at all, but what a feat! I admire anyone who has a prolific apartment garden.

In today’s story, Benjamin vonBergen admits apartment gardening isn’t ideal, but he finds a way to make it work in My Burlap Garden. Anyone who has used burlap in their garden probably had the same questions as I did — but why? How?

In my experience, burlap is best used as a weed cloth, but it’s not even great at that because it’ll keep new seeds from coming in, but will generously open the door to last year’s weed seeds that want to grow up through it.

So when Benjamin decides to basically use burlap coffee sacks as grow bags because they were 99 cents, my thought was, “noooooooo!” But despite some initial disaster, he comes out on the other side with a cost-effective rig that actually sounds like a decent idea for an apartment garden.

I’ll let you judge for yourself when you read today’s story.

And This Isn’t the Only Apartment Garden Story

A college grad makes do.

for a would-be gardener, renting is not ideal—and renting an apartment even worse. So from the start of my search until the day I signed the lease, I did everything in my power to rent a house rather than an apartment. The problem was that I was about to be a college graduate (debt-free!) with zero cash on hand and no credit. Hence, when an apartment became my only option, I swallowed my hopes for a sprawling vegetable and herb garden.

But I didn’t want a “cute” garden, a token garden. I wanted a real, edible garden. And I could barely afford cleaning supplies! Where to look for a solution? The only place any reasonable person would look. I Googled “cheap container gardens.” I Googled “frugal container gardens.” I Googled “hip balcony gardens.” I found cutesy stuff. I found artsy stuff. I found weird ideas for containers. Old truck tires filled with dirt. Coffee mugs. Old cut-up furniture. Large books with holes cut out of them. Lamp shades. Pillowcases. 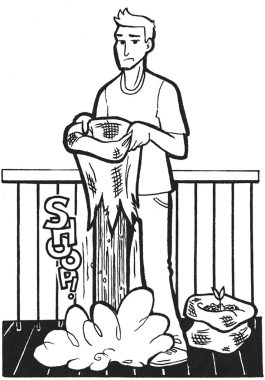 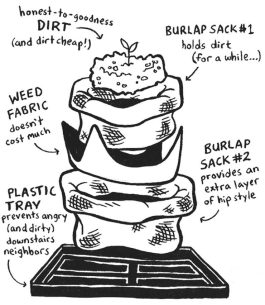 Then I walked by thin plastic plant trays—each less than a dollar. I had it made. I cut the weed fabric into pieces, wrapped pieces around the existing containers, shoved these containers into the new, doublefolded sacks, and placed them on the plant trays. I also swept (that was necessary).

The plastic was every bit as durable as I’d hoped, and it held water better, too. I was no longer showering the patio below with dirty water

All of which just goes to show: Where there’s a will, there’s a garden. ❖

By Benjamin vonBergen, published originally in 2016, in GreenPrints Issue #106. Illustrations By Hannah England

Tell me about your apartment garden, how have you rigged it to work?