As a lover of garlic scapes—the more-delicious alternative to asparagus—I could hardly believe it when I read today’s piece, Scaping Lessons, and learned there are people on this planet that don’t love them. Sure, I’ve heard of people who don’t know what they are or have never tried them before, but people who don’t like them? Never! Have they waited too long to harvest? Are they harvesting garlic scapes wrong? I needed to find out!

The good news is our story has a happy ending. But most importantly, it contains so much relevant guidance on how to properly pull (yes pull, not crack or snip) garlic scapes, that our author learned from her neighbor’s mother who was in town visiting from China.

Tip #1: Pull them in the morning when it’s dewy.

It sounds like the antithesis of what we’ve been taught, to pull garlic scapes before they curl, but following this advice turned a scape hater into a lover, so I’m game for new strategies! For the rest of the guidance on harvesting garlic scapes, you’ll have to keep reading, but you’re going to need a nail. (Yes, a nail.)

Have You Been Harvesting Garlic Scapes Correctly?

When it came to garlic, I thought I knew all there was to know. 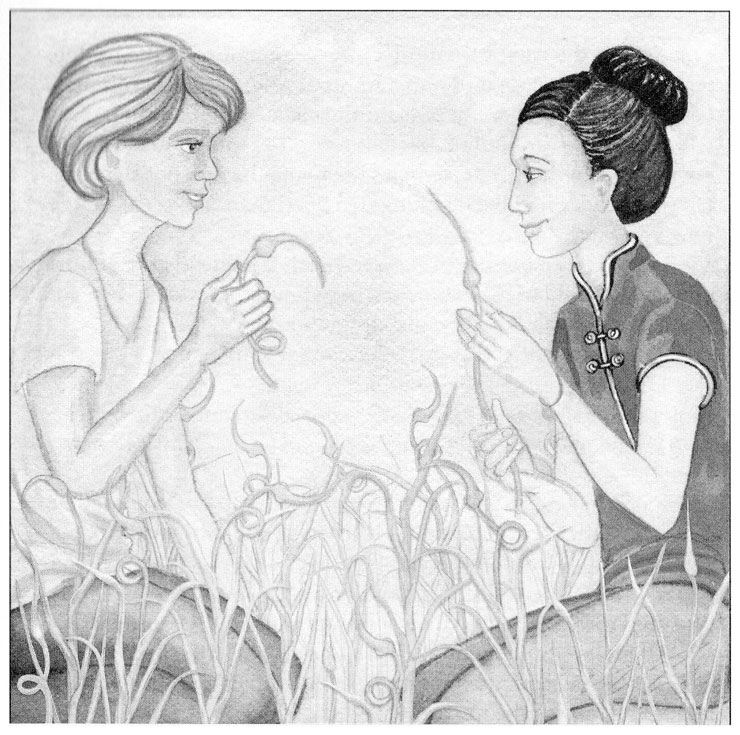 It started the afternoon before while I was puttering in of my back beds, when my neighbor Kaiyan came over. Kaiyan and I have become friends over our plants. My ability to speak Chinese is nonexistent; fortunately, her English is good and we are patient with each other. Kaiyan’s parents were on an extended visit from China. I grinned up at her in greeting, and she said to me, “My mother wants me to ask you why you are growing your
garlic wrong.”

“Oh,” Kaiyan answered, “she says you should not be breaking off the long stalks.”Ah, now Iunderstood. The sorts of garlic that grow best here in New England are hard-neck varieties. In June, hard-necks put up a long
stalk, called a scape. When the scapes grow long enough that they curl into a loop, they must be removed. If you don’t break off the scapes, they will develop heads of bulbils and draw energy away from the bulbs growing underground. I told Kaiyan, without explaining, that I know from personal experience that the stalks need to be removed.

Yes,” Kaiyan agreed, “my mother says it is good for the garlic to do that, but you shouldn’t break it off. You should pull it out of the plant.” I objected that the scape could not be pulled out, but Kaiyan insisted her mother said that was the way to do it.

Kaiyan and I moved over to the garlic bed and began trying to pull out scapes. At first, I was quite anxious that I’d pull out the whole plant, but they are very firmly rooted and that didn’t happen. Most of the scapes pulled out an inch or so from the stalk, but then they broke off. Occasionally, one broke off inside the stalk, and pulled out cleanly. Kaiyan looked a little puzzled. “Perhaps,” l offered, “you grow a different sort of garlic in China than we do here.” This wasn’t such a far-fetched idea. The plant that I call a chive and the plant that Kaiyan calls a chive are entirely different. Maybe this is also the case with the garlic. I gave Kaiyan the scapes that we had pulled, and she headed home.

A little while later, she returned. “My mother says she will teach you how to do it the right way,” Kaiyan told me. “She says the best time is morning. She will meet you at seven o’clock tomorrow and show you what to do.” Now I was astonished. Kaiyan’s mother was going to show me how to harvest the right way? Garlic scapes? I should probably explain that I think garlic scapes are second only to kohlrabi in their vegetative pointlessness. (My opinion of kohlrabi? Don’t waste garden space on it. Just peel and eat your broccoli stalks instead.) Garlic scapes are huge, hot and slightly lignified. They’re too tough to eat raw, and they take forever to cook. So I could not believe that anyone was making such a big deal about them. Nonetheless, I thanked Kaiyan and asked her to tell her mother that I would be excited to learn how she works with the plants.

I crouched down to watch. Muttering softly in Chinese, she showed me that she had brought a large nail. She counted up four leaf junctures from the soil, then pierced the stalk with the nail. Then she grasped the scape where it emerged from the stalk and pulled, slowly and steadily, with both hands. There was a barely audible snap–and the scape slipped out of the stalk. She showed me again. This time I demonstrated that I understood to count up four leaf junctures, and she nodded her approval. I hustled to the garage, got my own nail, and began to try her method. I was definitely getting more of the scape than I did yesterday, but still about half the ones I tried were snapping off only a couple of inches down. Sometimes Kaiyan’s mother also failed and broke off one or two of the inner leaves along with the scape.

“The plants are cooler in the morning, and maybe they won’t break,” she said. “Also, the frost, no …” and here
We worked together to help her find the right word, “… the dew maybe helps.” Then she added, “In China, it is very, very hot, so it is better to do this work early, before the sun is too high. These garlic stalks are very delicious; we use them in dumplings.”

It was sweet: tender, like the inner part of a grass stalk, and very, very sweet! Garlic scapes are a delicacy–I had just always harvested them wrong! It was easy to imagine tossing several cups of these into a large stir fry. No wonder the Chinese looked forward to harvesting them. They were amazing!

By Sonja Johanson, published originally in 2016, in GreenPrints Issue #102. Illustration by Nicole Tamarin.

How have you been harvesting garlic scapes? I have loved them snapped after they curl, but sweet and tender baby garlic scapes sound like the way to go!