For those of us who love gardening, we know why. It’s easy on our nervous systems, which is the center of how we engage with the world. There is no better way to achieve a calm state than being grounded in the garden. Being close to the earth has always had that effect on me, and I’m sure you know the feeling—it’s the joy of gardening!

The piece I’m sharing with you today from Karel Capek is just as soothing as gardening itself. My favorite line in the piece says, “a real gardener is not a man who cultivates flowers; he is a man who cultivates the soil. He is a creature who digs himself into the earth, and leaves the sight of what is on it to us gaping good-for-nothings. He lives buried in the ground. He builds his monument in a heap of compost.”

Reading further, Capek’s comparisons of a garden to a womb, and of watering to the sacrament, is like a deep inhale and exhale.

When you read this piece, you’ll be enchanted by the joy of gardening no matter where you’re sitting to read it. I hope you’ll find it as meditative as I have. 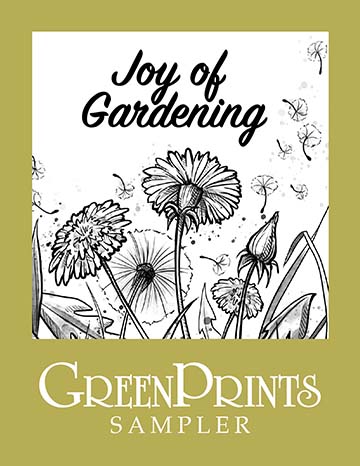 The following joy of gardening story comes from The Weeder’s Reader: GreenPrints’s Greatest Stories. Gardening stories like these always give me a good sense that I am on the right path and have chosen a worthwhile “hobby”. I hope you’ll enjoy it too.

On the Art of Gardening

Spring bursts forth in joyous prose.

When I was only a remote and distracted onlooker of the accomplished work of gardens, I considered gardeners to be beings of a peculiarly poetic and gentle mind, who cultivate perfumes of flowers listening to the birds singing. Now, when I look at the affair more closely, I find that a real gardener is not a man who cultivates flowers; he is a man who cultivates the soil. He is a creature who digs himself into the earth, and leaves the sight of what is on it to us gaping good-for-nothings. He lives buried in the ground. He builds his monument in a heap of compost. If he came into the Garden of Eden he would sniff excitedly and say: “Good Lord, what humus!” I think that he would forget to eat the fruit of the tree of knowledge of good and evil; he would rather look round to see how he could manage to take away from the Lord some barrowloads of the paradisaic soil. Or he would discover that the tree of knowledge of good and evil has not round it a nice dish-like bed, and he would begin to mess about with the soil, innocent of what is hanging over his head. “Where are you, Adam?” the Lord would say. “In a moment,” the gardener would shout over his shoulder; “I am busy now.” And he would go on making his little bed. 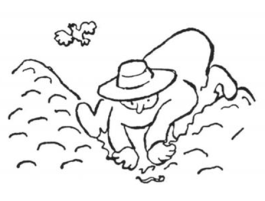 If gardeners had been developing from the beginning of the world by natural selection they would have evolved most probably into some kind of invertebrate. After all, for what purpose has a gardener a back? Apparently only so that he can straighten it at times, and say: “My back does ache!”

As for legs, they may be folded in different ways; one may sit on the heels, kneel on the knees, bring the legs somehow underneath, or finally put them round one’s neck; fingers are good pegs for poking holes, palms break clods or divide the mould, while the head serves for holding a pipe; only the back remains an inflexible thing which the gardener tries in vain to bend. The gardener usually ends above in his seat; legs and arms are straddled, the head somewhere between the knees, like a grazing mare. He is not a man who would like “to add at least a cubit to his stature;” on the contrary, he folds his stature into half, he squats and shortens himself by all possible means; as you find him he is seldom over one metre high.

Tilling the soil consists, on the one hand, in various diggings, hoeings, turnings, buryings, loosenings, pattings, and smoothings, and on the other in ingredients. No pudding could be more complicated than the preparation of a garden soil; as far as I have found out, dung, manure, guano, leafmould, sods, humus, sand, straw, lime, baby’s powder, saltpetre, horn, phosphates, droppings, cow dung, ashes, peat, compost, water, beer, knocked-out pipes, burnt matches, dead cats, and many other substances are added. 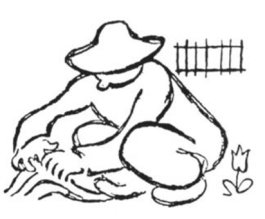 All this is continually mixed, stirred in, and flavoured; as I said, the gardener is not a man who smells a rose, but who is persecuted by the idea that “the soil would like some lime,” or that it is heavy (as lead the gardener says), and “would like some sand.” Gardening becomes a scientific affair. A rose in flower is, so to speak, only for dilettanti; the gardener’s pleasure is deeper rooted, right in the womb of the soil.

After his death the gardener does not become a butterfly, intoxicated by the perfumes of flowers, but a garden worm tasting all the dark, nitrogenous, and spicy delights of the soil. 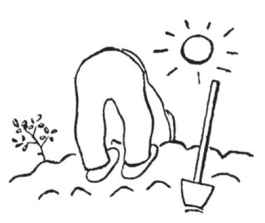 But there is one moment when the gardener rises and straightens himself up to his full height; this is in the afternoon, when he administers the sacrament of water to his little garden. Then he stands, straight and almost noble, directing the jet of water from the mouth of the hydrant; the water rushes in a silver and kissing shower; out of the puffy soil wafts a perfumed breath of moisture, every little leaf is almost wildly green, and sparkles with an appetizing joy, so that a man might eat it.

“So, and now it is enough,” the gardener whispers happily; he does not mean by “it” the little cherry tree covered with buds, or the purple currant; he is thinking of the brown soil.

Did you enjoy this joy of gardening story? Please tell us if it brightened your day and any personal stories that this invoked for you.