IIt was many years ago (Several? Decades? Where are my car keys?! Have Evil, Key-Stealing Squirrels become tired of planting black walnuts in every one of my garden beds and achieved forced entry into the house?) that a much younger me had had good success with many plants—and rationalized that the others were their own fault.

Then came the Summer without a Summer. When I tried to Google (TM, ®, ©; used without permission; come and get me coppers!) that phrase all I got was the year 1816, when I was too young to garden. That horrifying incident was caused by a volcano that erupted with a force estimated at 100 times more powerful than the explosion of Mount St. Helens, covering the entire planet with reflective ash that shut out most—if not all—of the sunlight.

536 Anno Domini was also a nasty year for plants and might have even wiped out the dinosaurs. (I know that they were around before that because my cherished [and long lost] “Prehistoric Playset” had a brontosaurus [now renamed ‘apatosaurus’ without my knowledge or permission], a T-Rex [my spellcheck gave up on that one], and a family of upright, hide-wearing cave persons. I was hoping for a cave dog, but no luck. They did include a cave bear, which would not be as good at chasing a ball. Me, probably; a ball, not so much.)

{The Voice of Patus Interruptus}: “Ahem, cough, cough, ahem: Mike? Will we ever see the word ‘tomato’ in this story?” 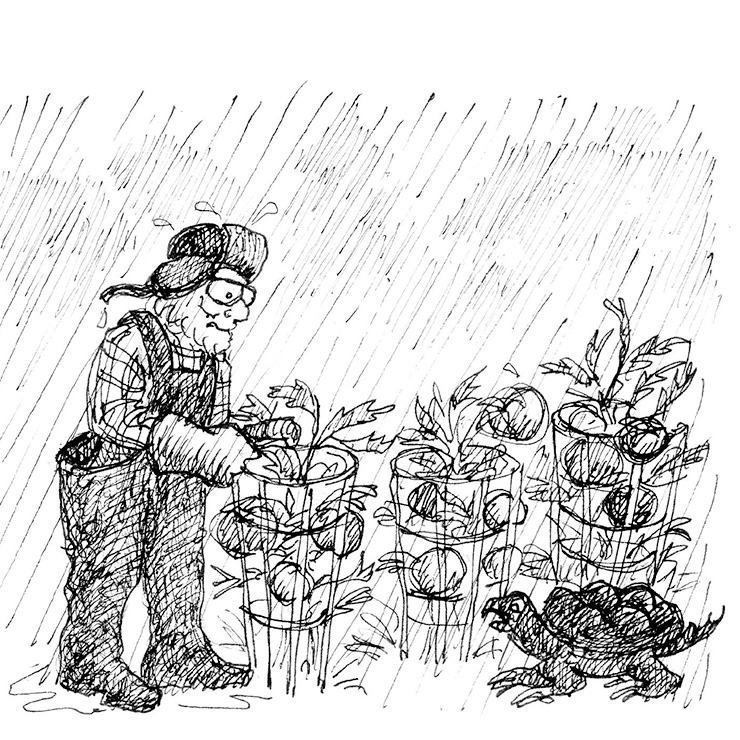 You just used it! (Pardon the interruption dear readers; Pat is still cranky about his 536 AD garden failure; nice bearskin, tho …)

Then chilling rains came. July temps dropped into the 30s!

I really wanted to nail the exact year of this event, because I am fairly certain that Pat would be no help. (Where are YOUR car keys, pal?), and I was vaguely certain that it was in the 1990s, which I recall much better than the 1960s, when I had no car. A deeper search led me to believe that the year was 1992 (a number arrived at only after enduring several “Great Songs of the 90s” sites, each of which for some reason took up less than a single page).

That year The New York Botanical Garden reported that most of their plants became sullen and depressed after a warm Spring surged back into Winter in March (I don’t care what people say; I call March as “the cruelest Month”), and July temps dropped into the 30s. People could see Russia’s weather in their backyard! New England’s, too.

(On the other hand, the American West saw one of the hottest, driest Summers that year; another lesson that gardening—like parenting—is not for the timid.)

And now Kats and Kittens, we return to the Topic for Today, which is tomatoes. (Pat: Can you insert a computer chip here that has the sound of you exhaling in relief? If not, one that has all of The Great Songs of the 90s? It’ll take up less space.)

IIt would have been my second or third year as Editor-in-Chief of Organic Gardening magazine (it depends; like asking how many books I’ve written. The answer is between three and 14, depending on how you count my ‘book in a recipe box,’ books I’ve edited, books I co-created with Stan Lee, and books I have apparently forgotten).

But I had been gardening (without help or instruction; my best gardens ever!) for more than a decade previously; mostly tomatoes (a story about which I shamelessly included in each and every issue of my seven years helming OG; I think “Twilight Zone Tomatoes” was my favorite—and nobody sued us over our title, unlike the story we called “Technicolor® Tomatoes” [which got me my first ‘cease and desist’ letter; I would go into more detail, but Pat would slap me silly (OK; sillier)]).

I gave up when I needed Winter gloves to stay out there.

I specialized at that time in growing heirloom ‘indeterminate’ tomatoes (meaning that they determined to keep growing until they took up as much space as a teenage boy sprawled across a couch). I thought I was growing the old, original Brandywine until I learned that the original was a pink tomato and not the humongous and delicious red one I was enjoying. Picky, picky.

I also grew Radiator Charlie’s Mortgage Lifter because I liked showing off tomatoes that were larger than a child’s head. Next up was a tomato that I called Georgia Streak for no apparent reason (but it was streaked orange and yellow, very much like a sunset and had a delicious tropical flavor). My crowning achievement, however, was Black Krim, a tomato that allegedly originated from Siberia and was soon to prove that dubious origin quite likely. (Do I need to close a ( ) here? I’ve lost track … )

Black Krims weren’t my biggest tomatoes, but they did average well over a pound apiece. They were also the closest to true black (a dark dusky purple), had a natural smoky flavor, and were the favorite of all the friends that remembered me at harvest time. I have long ago forgotten where I got the seeds.

Back then (“Where have you gone, Howie Shapiro? Our gardens turn their lonely eyes to you. Woo, woo, woo”), the most likely culprit was an early (to me) packet from Seeds of Change or master plant breeder Alan Kapuler’ Ph.D.’s Peace Seeds. (Please read more about this amazing self-taught master manipulator at the websites of the Seed Savers Exchange, Fedco Seeds, or, of course, Peace Seeds.)

II was privileged to be invited to dinner with Alan and his seriously lovely wife, Linda, along with Howie, Andy Weil, M.D. and a chiropractor or five when I spoke at the Bioneers Conference [again, in the early 90s] in San Francisco. My talk was titled “Stop Networking and Get Out and Do Something!” and illustrated entirely with panels from early-60s Marvel Comics: I wanted to motivate the attendees to stop talking to each other and get their hands dirty in the outside world.

However, my presentation followed the one by Bill Mollison, the legendary ‘father of Permaculture,’ who used an—cough, cough—unusual example of that technique from his native Australia. Some sort of wild sheep were eating all the vegetation on a notoriously dry hillside. Called to suggest a Permaculture response, Bill had the sheep shot and gutted, then had seeds of native plants stuffed inside their carcasses, where they were kept moist and with nothing around to eat the resulting plants. The audience was about 90% vegetarian, and they were carrying them out on stretchers. Thus came my motto: “Never follow children, dogs, or Bill Mollison.” ‘Nuff said.

I know the NYBG says that they saw their first Summer-free-weather hit in March of that year (whatever year it was … ), but I never set tomatoes out before May 15th and sometimes June 1st (cowards always win), so, to me, Spring was perfect. And I had started the plants indoors early to give them an extra special headstart. So we had enough of a crop to make sauce before chilling rains came and cooled that Summer for good. First to join the Choir Invisible were the Brandywiners, then the Streakers, even the fall crop of raspberries. (Oh, my!)

“So wet I was gardening with a sump pump!” {rim shot}

The Black Krims, however, kept pumping out flowers and tomatoes as if every day was a sunny day (none were), and my gardening friends who had been gifted with seed raved that they had tomatoes when Noah’s checklist was down to “Zebra.” We kept harvesting through torrential rains until (circa) mid-September. I had been pinching off new flowers to try and get the last full-sized green tomato to get to the breaker stage, with no luck. Clear plastic overnight; off in the morning to protect the plant from sun that never arrived. I gave up when I needed Winter gloves to stay out there and hip waders to protect me somewhat from the snapping turtles inhabiting the used-to-be rosemary bed. I called the game, broke the last Krim off, and suddenly felt like I had stepped on a sidewalk crack.

I brought it inside, dried it with a hair dryer, and put it in a brown paper bag with a ripe banana. Three days later it was ripe.