WWhen you taste homemade lemon curd for the first time, it changes you the same way that homegrown tomatoes change you, rendering you incapable of ever again confusing tomatoes with those rubber balls in the produce section. A simple blend of the most ordinary ingredients—three lemons, some butter, a few eggs, and a little sugar—can result in a concoction exponentially greater than the sum of its parts, each ingredient adding its own fragile qualities while bringing out the best in the others.

And cooking up a batch of lemon curd on a Sunday afternoon in January here in Placerville, California, might be the only way to get me through until May—May when the garden will be warm and dry enough to start planting and enjoy seeing things grow in my backyard.

He looked wrung out, like only half of him was standing there.

The hill where I live has big yards and huge oaks along the property lines. It’s an old neighborhood in a small town, and the little houses face away from each other, giving views of the town below. Over the past decade, though, the neighborhood has become more transient. Nearly all of the houses around me are now rentals that some-times sit empty for months.

Every Winter I envision a bountiful garden, hoping that Summer will fill my yard with beans and tomatoes and squash. And I daydream that the surrounding houses will bloom into a real neighborhood, one where I can leave bags of zucchini on door-steps and where impromptu gatherings with wine will break out on porches and patios. As the rain hammers my yard into a muddy bog, I always cook lemon curd and dream my two dreams.

I’ve gotten to know the few permanent residents. The lemons this year came from Deb’s tree, two doors down. They have thick rinds from cold nights, but are nearly bursting with juice. The branches were strewn with Christmas tree lights to keep the lemons from freezing, and as we picked them, “Feliz Navidad” looped nonstop through my head. I love her lemons. Zesting the rind and squeezing the juice makes my mouth water, and the kitchen will smell lemony for the rest of the day.

The butter came from a local farmer’s Holstein, and the eggs from two hens that live in my garden. I built their coop from an old kindling box that neighbor Dave gave me. I’ve gotten to know him and his wife, Sue, pretty well after he put a gate in the fence between our back yards.

Dave, Sue, Deb—that’s about it for regular inhabitants. And why bother getting to know all the transients? I’d never talked to any of the nearby renters; with them I kept to my own side of the fence.

UUntil this year and the sugar. Mike, the renter in the blue house next door, gave me the sugar. I’d only talked to him one day way back last June when he was rebuilding a section of fence between our side yards. Mike and his family had moved in the month before. After two tours in Iraq, he was excited about having a normal life again. From my kitchen window, I’d watched a tall, wiry guy with a military haircut play with his daughter, a little blond girl who looked about ten or eleven. While his wife watched from the stairs, they played catch until dark, and started a little garden with tomatoes and sunflowers and beans. Their flannel pajama bottoms got dirty as they weeded on Sunday mornings, and sometimes there were water fights with the hose.

That day he was fencing, I told him I was happy to see someone working on the place. The landlady hired men to whack the weeds and fix the broken windows, but not much else.

As Mike nailed up boards, his wife, Rita, and their daughter, Christina, came out to help. I told Christina about the new chicks I had and invited her to see them. Christina looked at Mike and he said “Sure,” so I let the chicks out into the garden. They scratched and pecked (and tried to eat my new bean seedlings), and I showed Christina how to perch them on her finger.

“I think we need some little chickens,” she said.

“Let’s see how it goes with the tomatoes,” said Mike. “Maybe next year.”

AA couple of weeks later, I was picking basil on the patio when Mike walked around the fence and into my yard. He looked wrung out, like only half of him was standing there. He offered me a bag of sugar because he was packing and didn’t know what else to do with it. “Rita passed away,” he said. She’d died suddenly at her parent’s house in Seattle.

“I’m so sorry,” I said, sitting down on the back steps with the sugar on my lap. “How’s Christina?” My stomach hurt, and I bit hard on my lip. Christina was at her grandparents’ while Mike found a job and place to live in Seattle. He talked a while, then we sat, in a consoling silence. The bees on the rosemary beside the porch came and went, and a woodpecker banged away at a telephone pole. After a while, Mike’s buddy came over to help load furniture into his truck.

I used to think that miracles were reserved for the devout. But that day, whatever the force is that cracks seeds open and pushes soft little sprouts through the soil, cracked me wide open, too. The friends I’d had for only one day woke me up to the little neighborhood that had been spilling in over my fences for years. I was the one not spilling out.

MMy chicken Alice has started clucking. She wants to go out to scratch for bugs in the yard. Lulu wants out, too. They can hear me clattering around in the kitchen. As soon as I finish pouring the curd into jars for Dave and Sue and Deb, I’ll let the hens out.

Then I’ll take a jar over to the new renters next door. ❖ 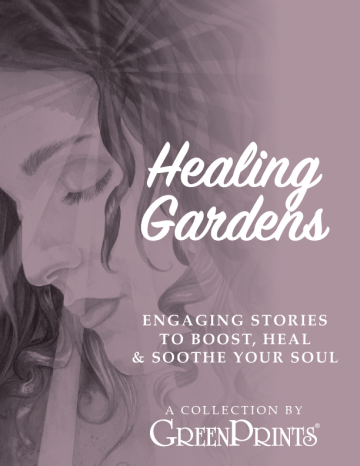