IIt was insidious really, the seeds of flower love planted in my heart and soul when I was young and oblivious. My mother did it, and I think she did it on purpose.

We lived in a lovely house that had a massive brick planter in the front. My mother filled it with petunias every Spring; they were always purple, white, and purple-and-white striped. To this day, the smell of a petunia immediately transports me to my childhood.

Friends and neighbors would ramble through the flowerbeds, oohing and aahing at the red and yellow lilies, pastel irises, and other blooms. I didn’t care, I just wanted a popsicle—I couldn’t have one until the tour was over—and their gab was droning on and on forever, all about fertilizers and shade. Some of them even knew the dreaded Latin.

Angelina had a quick intake of breath that then escaped in an “Awww” like a sigh.

Mom didn’t manipulate things by color or size. She simply said, “God puts everything together, and it looks fine, so that’s how I do it, too.” If something died, she just planted the spot with something else.

Still I didn’t realize what my mother was planting in me until the day we were next door at the neighbor’s garden, and she showed us her newest plants, Sweet Williams. They had little white faces fringed with red and white, and were sitting in a bed of white baby’s breath. Now there was a flower a girl could enjoy! At that moment, the seed of flower love opened in my heart.

AA decade later I had two little boys aged two and three, with a third on the way. I was having a difficult pregnancy, so the doctor called to put me on strict bed rest. I got in bed and realized I had no way to look up numbers to call anyone. I started to cry for my mother. The phone rang—it was her! It was as if she had heard me from 327 miles away and called. Six hours later, she was in my room, grinning broadly. “The gladiolas were blooming,” she said. “I knew by the time I got back they would be gone, so I brought them with me.” She brought in vase after vase of glads of assorted colors and scents. They made me laugh through the tears.

Two weeks later the official word came: the baby was no more. Mom reluctantly went home, but she left half the glads with me. They were a comfort to my broken heart, proof that I was loved.

WWhen Mom reached old age, she moved into a nursing home. Tired of pain, and tired of living in general, she fell into depression. Another woman in the home had a birthday, and someone had given her a huge bouquet of purple roses, purple daisies, and chrysanthemums. I asked her if I could borrow them for a few minutes. I brought them close to where Mom could see them. She suddenly perked up and looked like the mother I remembered, the one in the flowerbeds when I was a child, smiling and sniffing, marveling at the beauty.

She died a few days later. I wondered if she was like Elijah, who dropped his cloak over the side of his flaming chariot to bestow his spiritual gifts on Elisha. The mantle seemed to have fallen on my shoulders.

MMy grandchildren, Angelina (10), Cali (8), and Paul (5) were over the other day. They sighed deeply as I pointed out all the flowers and called them by name. “Smell these roses,” I said. “You can have a popsicle in a minute. Isn’t that red beautiful?” They plodded after me like convicts in a chain gang.

We made our way to the front yard. I was surprised to see a new iris blooming in the front flowerbed, by the name Baubles And Beads. Paul and Cali nodded, pretending to look interested, then walked away. But Angelina had a quick intake of breath that then escaped in an “Awww” that sounded like a sigh. We stood together enjoying the frilly yellow hood and the little face with the white-streaked brown velvet beard it sheltered. The musky scent seemed to pull her in deeper. Eventually, she walked away smiling. I stood filled with pride and wonder at the blooming of flower love in her soul.

My mother’s seed lives on. ❖ 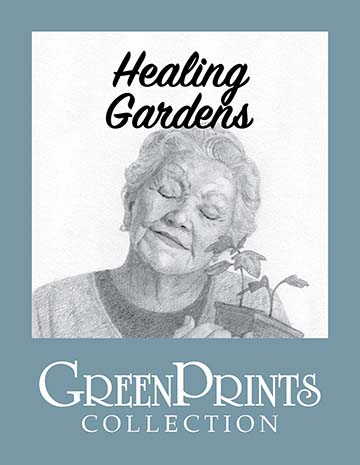