Earlier this week, my husband, Kim, showed up outside carrying our new pole pruner. A while back, he had promised to help me cut back some overgrown branches of a pine tree that was shading part of my garden. Hooray! I had wanted to do this forever, but it was a two-person job. Since the garden is officially “my thing,” I was happy he was finally ready to tackle it. Kim pruned and I dragged all the amputated branch pieces into an enormous pile. Suddenly I had a brainstorm. Much of our yard is a big slope that is sorely in need of mulch. I had just finished weeding it, so now would be a perfect time to apply mulch, and those branches were covered in pine needles. I dragged a chair over and started laboriously stripping needles from one piece of pine branch after another.

“What are you doing?” my husband asked.

“Free mulch! This will be perfect on our slope!”

He didn’t say anything, so I grabbed him a chair and handed him a branch. Three hours later (yes, three hours later), we were done and I had a mountain of pine needles.

“Isn’t this great?” I asked. “All of these needles. I can mulch so many places!”

After I distributed the first load of pine needles on the aforementioned slope, I was carefully navigating my way down to get another load when I stepped on my beautiful newly pine-needle-mulched area. Even with my special slope-walkers (soccer cleats) on, my foot went out from under me. I almost went tumbling. Who knew pine needles make for such a slippery slope? I have lost my footing up there before, done a three-quarters somersault, and only stopped when I crashed into the Jerusalem sage. I didn’t want to repeat that. Luckily, I grabbed hold of the Mexican marigold, and it saved me. As I finished crossing the slope, I noticed a baby oak tree growing. Oops! I must have missed that one when weeding. Oak trees do not grow naturally in my suburban yard. These oak trees were due to one of my earlier insightful ideas. Could it be Number Six? It was Thanksgiving. My two wonderful grown children and their spouses were visiting from out of town, and the six of us were taking a pleasant stroll along the edge of a nearby San Diego county park, which has many (wait for it…) oak trees. Acorns were all over the ground. I love birds, and I know jays like acorns.

“Hey guys,” I asked, “would you all please scoop up as many of these acorns as you can hold? Then we can take them home so I can feed Jay.” They looked at me as if something besides acorns was nuts.

“Jay the scrub jay,” I replied.

“There is only one? Why does it need so many?”

Five or six tumbleweeds into this exercise, we had about one cupful of mulch.

“Just do it or she won’t let us forget about it,” muttered Kim. Once home, I put the acorns in one of my bird feeders, and Jay, Jay, Jay, Jay, Jay, Jay, and Jay spent the next several days enjoying them. Except unbeknownst to me they weren’t eating them—they were burying them. Everywhere. Over the next several months I removed countless baby oak trees. I love oak trees, but I already have too much shade! (See Ridiculous Thing Number 7 above). This happened at least five years ago, and I am still finding baby trees I overlooked. But it isn’t ridiculous to want to feed Jay, is it? Is it? OK, OK. Number 5? My kids are quite accustomed to helping with garden and yard projects. When we moved into our home 30 years ago, our lot backed up to beautiful rolling hills that, in season, were covered with wildflowers. They were also covered with legions of tumbleweeds just sitting around doing nothing. Always on the lookout for more mulch, I marshalled the kids and sent them on a quest to throw as many of the tumbleweeds as they could over the wall into our backyard. This was going to be great! I ended up with a towering mountain of tumbleweeds and just needed my husband to start up the shredder-chipper. It goes faster with two people, you know.

Five or six tumbleweeds into this exercise, we had about one cupful of mulch. Those of you who are more observant, more rational, or just luckier than I may have realized that tumbleweeds are 99 percent tumble and only one percent weed. So now we had a useless, and enormous, mountain of tumbleweeds still sitting in our yard. That night, we had a huge bonfire. The 99 percent tumble helped them burn really fast!

Number 4? Even though those beautiful green rolling hills are now mostly covered with houses, I still have constant battles with vermin. The squirrels have no respect for all the work I do nurturing my precious heirloom tomatoes into beautiful, lush orbs of deliciousness. They carry my beautiful tomatoes off in their nasty little hands and eat them. I have tried many methods to stop these varmints, but the most entertaining method was the netting cages. After I finished drawing up extensive detailed plans, my husband and I spent way too much money on a huge pile of PVC pipe and rolls of nylon netting. We then constructed enclosures for the three areas of the yard where I have tomatoes. This was no small feat: the netting is very difficult to work with, and we had to modify the design a few times to add stability. Finally they were up—the tomatoes were protected! Of course, every time I needed to get to the plants, I had to unclip the opening and step through the tangled mess of netting into the cage, but it was worth it. That is until I started catching birds in the cages. Hummingbirds would get in there and go completely berserk, zipping back and forth trying to get out. A house finch got stuck in the netting and died. After two or three other dead-bird incidents, the cages came down. The PVC pipe is in the rafters in the garage. (If anyone needs any PVC pipe, let me know, I have lots.) The squirrels won that round.

Number 3? My much wiser, experienced neighbor told me he has been trapping squirrels and relocating them. I could do that! So every time I saw a squirrel, I put my live trap out with their favorite foods: apples with peanut butter, lettuce, tomatoes (Grrr!), whatever. For days, nothing happened. Finally, one morning I looked up the slope and saw the trap was closed and there was a furry beast within. Success! I put on my slope-walkers and headed up to retrieve the monster. It bared its ugly teeth and hissed at me. It was an opossum. Boy, those things are nasty. Number 2: I relocated the trap and added some different snacks. A few days later, I found a trembling baby bunny, his ears all flattened to his head, big eyes beseechingly begging me to be merciful. I let him go, too.

I have since added extra tomato plants to allow for some loss to the demon squirrels. (Do I get to take one mistake back for doing some-thing right?)

I suppose that the one garden project I may concur could be perceived by some as ridiculous was the horse blood incident of 1975. I was a college student working at a food testing lab that had a contract with a dog food company. We were discarding a huge number of blood-bank type units of horse blood that we had tested. (I don’t like to think about what happened to the horses, but I had tuition to pay.) I knew blood was a rich fertilizer, so I—of course—took it home. I convinced my not-yet-husband to help me empty the units into a plastic trash can, dilute the blood with water, and distribute it all over my parents’ yard, which I had taken over and turned into a flourishing garden. We looked like we belonged in that scene from the movie “Carrie.” It looked gruesome. But boy, did the plants love it!

Kim designated that as Ridiculous Garden Thing Number 1. But, really, what does he know? He isn’t a gardener. Now if you’ll excuse me, I have to go cut back my cassia, as it is completely blocking the pathway again. How was I supposed to know it would get so big? The description said it was a dwarf variety.

Maybe I can get my husband to help me with his new pole pruner. That wouldn’t be a ridiculous idea. Would it? ❖ 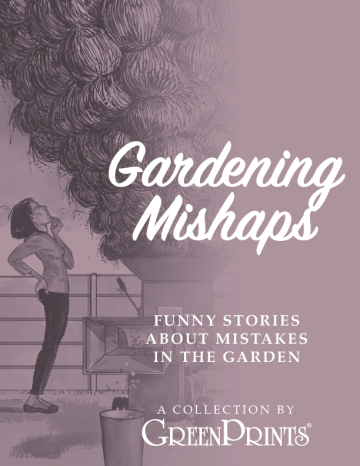