HHow difficult can it be?” I said to my husband, the Silicon Valley computer nerd, on Wednesday morning. He peered at the magazine article with a cautious expression, no doubt wondering if this was a “Honey Do” item. It wasn’t. This Honey was ready to Do it on her own.

We were sitting in the garden under our new pergola with a pot of black coffee. I pointed at the photograph of a circular brick patio, described as a weekend project. Like the pergola, this would be a perfect addition to our American home—we Brits were keen to adapt to our new environment.

“Doesn’t give a cost estimate for the raw materials,” he said in a dubious tone.

“Bricks don’t cost much,” I said, “even in California.”

“How difficult can it be?” I said to my husband. We Brits were eager to adapt to our new environment.

He rolled his eyes. Ever since he erected the pergola last week—singlehandedly—he was a self-proclaimed expert on everything DIY. I couldn’t understand how he’d gone from geek to handyman in less than seven days. I noticed that Greg, our son, had managed to carve his initial, “G,” high on the cross beam. I could almost imagine his small feet standing on the table in triumph. (Where did he get a penknife and why wasn’t he being supervised?)

“True,” I said, “but I can pick up a tamper when I buy the other stuff. By the way, what’s a rototiller?”

“Er, it’s a machine with blades,” he said, circling his pale soft hands in the air, fresh Bandaids covering his wounds from the pergola project. “They chop up the dirt.”

He answered so quickly. How did he know about these things?

“Hire one instead,” he said firmly, flopping the magazine closed. I could tell he was relieved to be off the hook.

“Have you read the instructions?” he asked. “All of them?”

“Of course, how else would I know to buy sand?” I wondered what kind of sand? Could I use the dregs from the children’s old sandbox and save a cent or two?

OOnce my husband left for the office, I headed out to the store on a spending spree. Although I forgot to take the magazine with me, I had almost perfect recall of every picture in the ten steps.

Supplies acquired, I crawled back home. The car’s suspension groaned—bricks and sand are heavy! I stacked everything on the driveway in the midday sun. The thought of hauling it all through the gate, along the narrow side yard, and into the garden wasn’t appealing.

“Hi there, neighbor,” said the jovial man from the opposite house. Gene was a man who’d been married for more than 40 years, which I found hard to imagine. Also, a grandfather to three, a father to four, and a dad to six he’d adopted—which was way beyond my comprehension.

I suspect I lost more than a few minutes chatting, maybe an hour, possibly longer.

“I keep telling you, call me Gene. None of that ‘mister.’” He rested heavy arms on our white picket fence. I liked his threadbare jeans and his yellow tape-measure suspenders. Was Gene short for Eugene? Why did Americans clip their names to a single syllable? Did they feel they lacked the time to say more than one?

It was my understanding that Gene used to be a builder before he retired, what Americans called a contractor, which sounded more like a lawyer to my ear. He pushed back his baseball hat and casually scratched his forehead.

I handed him the magazine which had been buried in the car all the time, no longer glossy and crisp, but torn and crumpled, with a surprising amount of sand in the seam. He adjusted his reading glasses.

“Looks like a couple of your step-by-steps are missing,” he said casually.

“You done this kind of work before?”

I pointed at the sundial hiding in the shade. “I made the mosaic top for that,” I beamed. “Although, somehow the gnomon—the part that casts the shadow—has snapped off. Must have bought the wrong glue.”

“More like the wrong type of wood. You gonna level the site first, I ’spose?”

“No,” I said. I jumped up and down on the weeded circle. “This looks flat.”

Gene drew his lips together, a puff of air escaping. He headed off, while I fought with the first bag of sand, which didn’t have a zipper. Sadly, my dull scissors only cut a small opening. I tore the cut larger—and suddenly all the sand poured out at my feet.

“Why don’tcha go put some work shoes on?” he suggested as I brushed the sand off my sandals. I was about to refuse, but then the phone rang. I dashed inside to catch the call—my mother from England. I expect I lost more than a few minutes chatting, maybe an hour, possibly longer by the time I’d sorted through stilettos and espadrilles to find something suitable for my feet. By then, I needed to go to my doctor’s appointment across town. I waved at Gene through the car window as I reversed from the garage.

Why do doctor’s appointments take so long in this country? I was used to waiting hours in England because the service there was free, but somehow, now I had to pay for a doctor, I expected to be seen at the exact minute specified on the card. Sigh, I wish…

It was mid-afternoon by the time I returned home. I was surprised and delighted to find Gene hard at work in my garden. I took him a glass of water, remembering to add ice, and grabbed my largest wooden spoon.

Gene had worked up a sweat in the heat. He stood next to a perfect circle of sand.

“Thank you,” I said. “Now where’s that magazine?” I looked around until I saw the pages flapping under a large cobblestone. No matter, I remembered most of the steps. Gene leaned against the tree in the shade and watched me count the bricks one-by-one.

I grabbed the first two bricks and pushed them into the sand like two solitary teeth in a baby’s gappy mouth. “Math wasn’t my best subject at school,” I said, “but that looks like…about a hundred.”

“Hundred and forty,” he said. “You could start with the paver. Put it in the center.”

He’d laid the paver on a sheet of burlap which—Clever!—made it much easier to drag to the middle. Or nearly in the middle: Gene shifted it an inch with the toe of his heavy boot, like nudging a golf ball into a hole.

“There,” he said. “Just have to slot the rest of these bricks into place.” I found I couldn’t carry more than four bricks without dropping them. Already, a few had chips, and several had broken in half.

“Why don’t you start around the central paver,” he said, “and work outward to the rim?”

“Does it make any difference?”

“Might,” he said. “Could run out of bricks. Won’t show so much if you work outward.”

He made a lot of sense. I was happy to accept his advice. “What’s the spoon for?” Gene said.

“To bash the sand in between the bricks.”

“Try this trowel,” he said passing me a triangular-shaped tool. “Fits together perfect,” I said, wiping my brow.

He was right: open spaces stared back at me like gaps in a jigsaw puzzle.

“Where did I go wrong?” I said, defeated.

“Take a step back,” he said, with a lopsided grin.

“To which step-by-step? Seven, or further back to five?”

“No,” he said, “step back and see where you’ve gone wrong.” Happy to escape the heat, I dived into the shade and checked out the scene from a few meters away. I sighed. It was hopeless.

“They look fine close up,” I said, “but from here they’re all crooked.”

As good as his word, he patiently told me to shift them this way and that, this one and that one, until finally he declared himself satisfied. He brought over a broom and brushed vigorously.

“When’s that husband of yours coming home?”

“Tell him you did it all on your own.”

I giggled, gathered up his tools, and put them into the wheelbarrow.

“I’m tempted,” I said, “but I never could have done this with-out you.”

“He’ll guess and I can’t lie. Besides, he’d like the chance to thank you, too.”

“Wouldn’t be so sure about that,” Gene said, lifting the handles of the wheelbarrow and heading for the gate.

“Why?” I said. “I know he’s geeky, but lately, he’s changed. Now he loves the challenges of DIY.”

“Is that so?” Gene latched the gate with care. “I expect that’s because of all the time you spent away last weekend.”

“How did you know I was away?”

“Because I was in your yard with your husband and the kiddies. I bet he told you he put up that pergola, right?”

“Well next time you’re out there, take a look on the cross beam and see what you find.”

I remembered the “G” carved in the wood.

“Nope. If I were you,” Gene said, pulling his hat down to his eyebrows with a wink, “Say you did it all yourself. 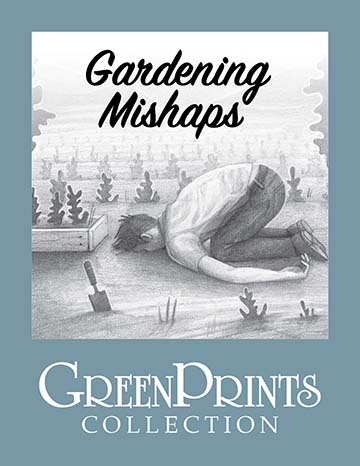