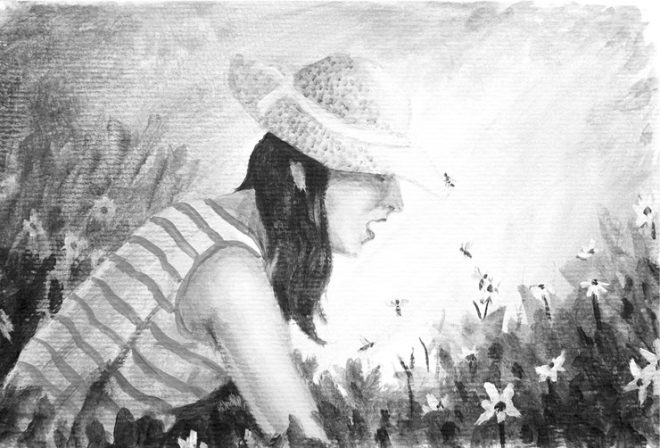 “The hum of the bees is the voice of the garden.”
—Elizabeth Lawrence

IIt is a legend that began in England and spread to the colonies in the early days. If you had beehives, you knew that it was necessary to respect the honeybees by keeping them informed of important happenings that occurred in the household. If someone married, a child was born, or one of the householders died, it was important to “tell” the bees about it. Usually, the gardener of the family would undertake the responsibility—or the oldest child might act as the “bee-teller.” It was believed that if this task was neglected, the bees would get angry, swarm, and deprive the household of honey. In Ireland, it was also believed that bees had the ability to bridge the natural world and the afterlife.

Fable or not, bee-telling did serve one purpose: to let the bees get to know and accept members of the household by their voices and smell. (Yes, bees have a pronounced sense of smell.) Then the people who worked in the garden and fields could do so safely, surrounded by a cloud of industrious little honeybees.

It was a perfect symbiotic relationship.

It is fairly simple to calm down bees with gentle talk.

Nowadays, most of us have lost the natural connection that allows us to work in harmony with the bee, both honey and bumble. It is much more common to see people swatting at or running from the gentle bee—when all she is doing is helping your garden grow. Will she sting? Of course, if sat upon or threatened. So would you.

Some people call me a bee whisperer because I actually do talk to the bees in my garden and consider them good company. If I have to be around a plant that has a lot of bees busily working the flowers, I speak quietly and soothingly, reassuring them that I will not bother them. It is not really what I say, but the tone in which I say it, that makes the difference.

You can tell by their tone, as well, what their mood is. We all know the sound of angry buzzing, but it is fairly simple to calm them down with gentle talk. When their humming becomes mild and monotone, it is safe to stick my bare hands into a bush. They are content gathering pollen—and content to have me in their flower patch.

TThis sometimes has the unfortunate effect of, well, freaking people out. One day my granddaughter and some of her friends were shrieking and waving their arms when they approached a patch of mint where many bees were happily working over the flowers.

In a possibly misguided attempt to reassure them, I spoke gently to the bees and then stuck my whole hand into the mint plants. For a stunned moment, the girls stared at my naked hand and wrist (sure that I would be stung to death, I guess). Then they ran screaming to their mothers, who looked at me as if I were a reincarnated witch from Old Salem.

On another more successful occasion, I taught my young son not to fear bumblebees but instead how to pet them (carefully) while they are busily about their work deep inside a flower. (They are actually covered with soft fur and have a much higher metabolic rate than honeybees.) These gentle “humble bees,” as the British people call them, are fascinating to watch and learn about. For instance, should they happen to stay out too late, they find their way home in the dark by using the polarized light in the sky. And home for most bumblebees is a nice, cozy hole in the ground.

I taught my young son not to fear bumblebees but instead how to pet them.

They are the clowns of bee society, too, as they often get stuck upside down inside a deep flower. You can see the entire flower vibrating with the bee’s antics as she tries to extricate herself! She does eventually climb out, covered with pollen and shaking her head as if to say, “Well, I really had to work for that load!” Then she flies off in a drunken manner, often cannoning into other flowers trying to right herself. In fact, according to the science of aerodynamics, bumblebees should not be able to fly at all. But the bumblebee does not actually know that, so she goes on flying anyway. There is probably a lesson lurking in that fact somewhere.

II sometimes teach gardening classes or give talks about the natural world. When the subject of bees arises, I get questions such as: How do you get rid of bees in the garden?—from otherwise intelligent individuals.

I try to be patient and answer, “Well, we don’t want to get rid of bees, because they serve an important purpose in our gardens.” I then go on to explain about pollination—while the questioner stares at me as if I had suddenly started speaking in Swahili. (I know—from prior experiences—not to mention that I also talk to bees.)

I cite the example that I have never been stung in 30 years of gardening. 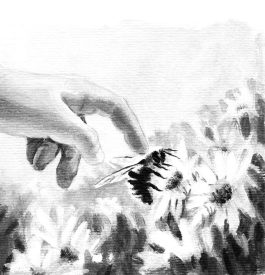 She is not having any of it: “Well, you must have different kinds of bees then because the ones in my garden chase me all over the place and have stung me and my dog many times.” I then ask her to describe the “bees.” She says they are yellow with black stripes. Of course, they are yellowjackets, not bees. I try to tell her this, but she says all “bees” are the same, and they all sting, and she wants them gone.

This is, unfortunately, not an unusual attitude. We are raising generations of children who have no idea how to tell a bee from a wasp or what bees do for us.

Yes, it is lovely to eat golden honey on toast, but it is so much more lovely to know who gave us that honey and that bees’ pollination activities are responsible for melons, squash, sunflowers, orchard fruits, beans, pumpkins, tomatoes, and a multitude of other things that we depend upon every day.

SSo the next time you buy 16 ounces of delicious honey, take a moment to honor the thousands of bees behind it that traveled countless miles and visited almost two million flowers to produce it. And then go out into the garden and gently tell the bees “Thank you.” They will appreciate it. And maybe, just maybe, go ahead … and pet one. ❖