II first noticed the little white-and-brown bugs on my squash in the middle of August.

The next day, my squash plant lay wilted and dying, never to rise again.

“What?!!” I exclaimed. The stink bugs were still swarming over it, and I noticed several patches of something that looked like eggs on the underside of one limp leaf. These were no ordinary stink bugs.

Dashing into the house, I consulted Sir Google only to find out that I had enemy agents in my garden. Instead of stink bugs, they were actually none other than squash bugs—Anasa tristis in scientific terms—and they were super deadly to my butternut squash, gourds, and pumpkins. By the time I went back outside to the garden, a few more casualties lay dead in the sun with dozens of squash bug troops feeding away at their dying bodies.

This meant war! Doing what many an angry gardener would do, I sped off to the nearest garden store and found a garden-friendly pesticide to blast at the enemy.

The pesticide seemed to work. I went to bed that night thinking I had won the war.

The next morning, I went out to gather vegetables—and found squash bugs all over my butternut squash.

“Eeeeeek!” I screamed. I grabbed for my new super weapon …

… and found that the bottle was empty. Meanwhile, the squash troops were gearing up to scatter a unit over on a nearby crook-neck. All I could do was watch helplessly while thinking, “How in the world can I afford that much pesticide?!” 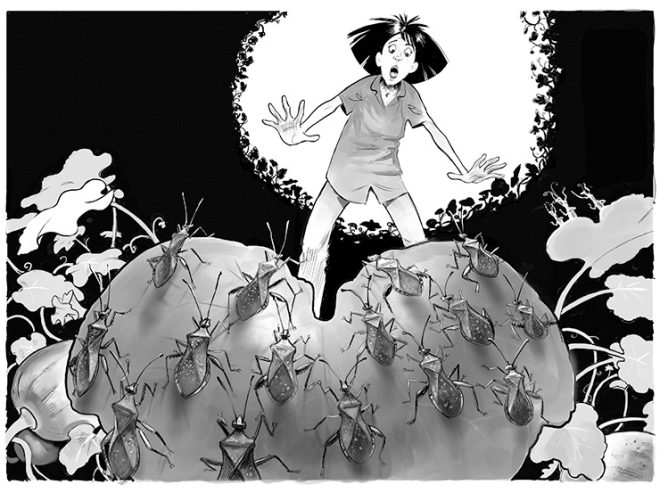 I couldn’t. It would take at least sixty-dollars’ worth just to keep the squash bugs at bay for a week. There was no telling how many eggs they had secretly laid. They must have been planning this attack for over a year.

I ran back into the house to see if Sir Google had any battle advice. Fortunately, he did. “Try this,” Sir Google said. “You’ve always got old coffee sitting around the house that doesn’t get drunk in the morning, right?”

“Well, take four cups of lukewarm or cold coffee, two tablespoons of cooking oil, and one tablespoon of liquid dishwashing soap and mix it all up in a squirt bottle.”

I raised one eyebrow at him. “O-kay,” I said. “But I think you’re full of old gardeners’ tales.”

I did exactly what he said, then went out to test it on the squash bugs. My first victims were a cluster of baby squash bugs, not even old enough to have completed their plant-assault training yet.

“Take this, you scum!” I shouted, blasting them with a coffee-scented spray of Sir Google’s secret weapon. For good measure, I sprayed them two more times.

Almost immediately, they seemed to melt into blobs of goo on the plant. 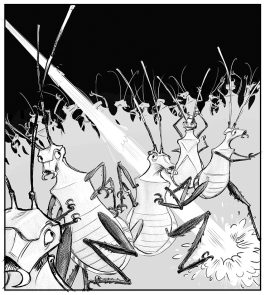 I stepped back in shock. This worked even faster than the expensive stuff from the store! Laughing maniacally, I launched a full-out attack on every squash bug in sight—from the tiny white ones to the big, brown-armored adults. It took a few more sprays for the adults, but within 30 seconds, they would freeze in place on the plant, never to move again. After every spray, any other squash bugs in the area retreated in the other direction. I could have sworn I heard them screaming.

“Run away!” I cried. “Run for your lives! Save the women and children!”

I smirked, stroking my chin. The squash bug troops were decimated for now, but I knew they would regroup overnight. But it didn’t matter—I now possessed the weapon of mass destruction.

Overnight, my purple hull peas were ambushed by fuzzy brown caterpillars. Any other time, I would have thought it was a coincidence, but I knew that the squash bugs had called in allies for assistance. ‘If she’s too busy fighting them, we’ll have a chance to regroup,’ they were thinking.

I mixed up two more batches of my super weapon using cheap dollar-store instant coffee. A few lingering squash bugs clung to my butternut squash, and my coffee mixture rained down on them like destruction from the heavens. I even removed old boards lying nearby, under which I discovered an entire barracks of squash bug troops.

Yes, I had won some battles, but the squash bugs had won the war.

“Thought you could hide, did you?” I sneered. After that, I marched over to the purple hull peas and blasted the caterpillars with the rest. They slowly retreated.

I went into the house, arms high, waving to an unseen cheering citizenry. I had won the battle. I decided to whip up a batch of sautéed squash covered in Parmesan cheese to celebrate. I knew I would go on to tell future generations of my family how I had defeated an entire army of squash bugs. My expertise would go down in the written histories of our gardening scrapbooks. “You really had squash all the way into September?” future offspring’s offspring would say. “Amazing!”

UUnfortunately, it was anything but amazing the next morning. I had saved the gourds and the pumpkins, but I took one look at my butternut squash plant and sighed.

Almost every leaf was curled and dry. The few remaining green ones were wilting in that direction. Yes, I had won some battles, but the squash bugs had won the war. I had waited too late to get involved.

I shook my fist at the sky. “Next year!” I vowed. “Next year I will start so early, there won’t even be a sequel. There will be no Squash Bugs Strike Back or Return of the Squash Bugs, not in my garden!”

How could I fail? The force—of cold coffee—is with me. ❖