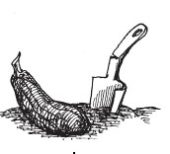 The other day, while weeding, I unearthed a rusty trowel, which got me started thinking about tools in general. They seem to come in two varieties, those I swear by and those I swear at.

Among those I swear at are cheap trowels. They’re usually stamped out of sheet metal, and they bend easily. They not only fail to do the job, they frustrate the heck out of me until I manage to break them.

Just then, I glanced up briefly from my weeding—and noticed that our normally well-behaved squash patch was tossing like a small boat on a choppy sea. On closer inspection, I found a pair of half-grown black-and-white pigs eating zucchini, with more enthusiasm than zucchini usually engenders. 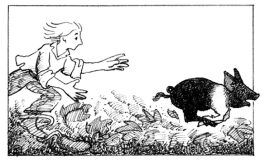 If you’ve ever been faced with the problem, you already know that it is not possible for one person to herd two pigs out of anything as succulent as summer squash. Believe me, I tried. The only results were trampled squash and hyperactive pigs.

About that time, Jean, the owner of the pigs, joined me, and we began working on a strategy to get the little porkers back on their own side of the fence. We planned our attack carefully—while the pigs speeded up their squash consumption. Pigs aren’t stupid; they knew their feast was about to be interrupted.

It wasn’t going to be easy, because pigs are noticeably short of handles. Remember the greased pig contests once popular at county fairs? I don’t think those pigs really had to be greased; slippery is their natural condition.

Jean tells me that her pigs weigh about 75 pounds. They are, after all, baby pigs. I suppose she’s right, if the pig is holding still and cooperating. But once you figure in the struggle factor, you effectively double the pig’s weight. 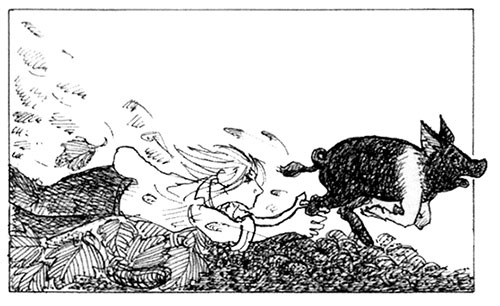 Jean said we’d have to be quick. There was just one minor problem. I thought we were each going to grab one end of the closest pig, heave it over the fence, then tackle the other one.

Jean expected me to grab an entire pig!

The next thing I knew, I was clutching the south end of a northbound pig whose wild squeals seem to have short-circuited my brain. I couldn’t let go. I was flat on my belly, still hanging on, when the pig plowed through the fresh heap of rabbit manure we’d piled so conveniently near the squash patch.

You never know when you’re going to need it.

We did finally get the little critters back on their own side of the fence—in spite of Jean’s hysteria. Every time she looked at me, she collapsed into fresh spasms of laughter. Oh, well. It could have been worse: the cow manure is on the other side of the squash.

Which brings me back to tools.

The most important tool a gardener can possess is a sense of humor. Keep it oiled, and not too sharp; you don’t want to hurt yourself.

Most of all, keep it handy. You never know when you’re going to need it. ❖