As a gardener, I am no stranger to snails in the garden, or other pests that wreak havoc on my beautiful plants. When the snails started appearing in my garden one Summer, I knew I had to take action quickly to protect my precious flowers and vegetables from these voracious little creatures.

Despite my best efforts to get rid of them, the snails continued to appear in my garden day after day. I tried various methods, including setting out traps and spreading diatomaceous earth around my plants. But nothing seemed to work for long, and the snails always found their way back to my garden.

Finally, one evening as I was working in my garden, I noticed a large group of snails in the garden gathering at the base of one of my tomato plants. Without thinking twice, I quickly grabbed the nearest shovel and started wildly swinging at the snails, knocking them off their feet and scattering them in every direction. While it was an exhausting process, it didn’t actually rid my garden of the snails.

Instead, I tried the ‘ol bowl of beer trick. Leave out a shallow bowl, and they’ll crawl in, get drunk, and drown. So far, that’s the only trick that’s worked for me to save my precious plants from being devoured by these voracious little creatures, and I was happy to see it work for the gardener in today’s story as well.

Today’s piece, “Snail Wars” is about author John Runnette’s face-off with our not-so-favorite gastropod, and I think you’ll get a kick out of it!

Enjoy More Stories of Animals in the Garden

This story comes from our archive that spans over 30 years, and includes more than 130 magazine issues of GreenPrints. Pieces like these that turn stories of animals in the garden into everyday life lessons always brighten up my day, and I hope this story does for you as well. Enjoy!

My face-off with a gastropod. 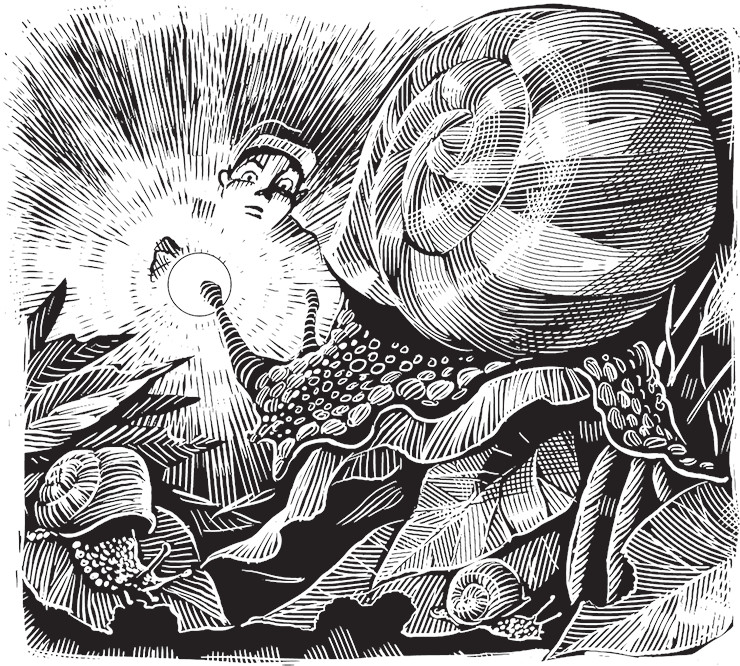 The snails almost got me, and they were trying, that was for sure. It was me against wave after wave of those ravenous monopods—and all I was doing was planting green beans in my first garden. Okay, maybe I didn’t know much about gardening, but the seed packages said growing beans was easy. There was no mention of snails, waiting with fangs flared, or whatever it is that snails flare.

Of course, the attacks happened at night because snails wage guerilla warfare. Just after a row of tiny beans sprouted, these slimy creatures attacked. It wasn’t even a fair fight: The baby beans couldn’t defend themselves. So the snails made mincemeat of my garden.

When I showed the gnawed stumps to the lady at the nursery, she just shook her head and sighed.
“Snails,” she said with Biblical finality.

Of course, I had to see for myself, so one evening, armed with one of those long police flashlights that cause blindness, I watched a platoon of snails slip into my garden. Sure enough, they chomped down on everything green. That left me with a decision:

How could I kill these snails?

But murder, I’m sorry to report, wasn’t easy. Squishing and stomping snails only stopped the first horde. An equally vicious gang was waiting in the wings. The carnage would have gone on all night, and that meant no sleep.

On to my second solution, use poisons–those toxic wonders that killed as I slept. But then I read their labels, which suggested that I’d better wear a hazmat suit before applying this stuff. That got me thinking about poisoning anything.

Bear with me: If I was planting a garden so I could eat fresh beans, why was I pouring gobs of poison onto the very ground where their seeds would grow? Wasn’t I poisoning the seeds, too, and wouldn’t it follow that I’d be poisoning the fruits of those seeds? Or did I miss something in Chemistry 101?

As you can tell, the science was too much for me, but I perked up when a friend told me about giving beer to snails. Of course, my friend was a guy. He said snails love beer, and that led me to Slug Pubs, traps that use beer to lure slugs and snails to drown themselves. There really are Slug Pubs, so I bought several, filled them with beer, and waited for the boozy death of soldier snails.

The next morning my garden looked like Spring Break gone bad. I should have called the morgue. Every Slug Pub was filled with dead snails who’d drowned in their own beer, or rather my beer. But other snails—maybe teetolating snails—ate what was left of my garden, which meant I would need more Slug Pubs, some with nonalcoholic beer, too. But it’s a sorry day in June when gastropods get to drink all my beer (and near beer). So I went to the periodic chart of elements, because snails—are you ready for this?—don’t like copper.

I bought long strips of copper-coated plastic, making my garden look like a tiny Maginot Line. That evening I watched as snails poked at the copper and recoiled in horror. I should have taken photos. The copper wall was like an electric fence, and that sent me down the bizarre path of weapons development.

If plastic strips of copper could stop snails or slugs, just think what real copper could do! So I spent an afternoon cutting a length of copper pipe into one-inch sections, making little copper collars. I put these around the seeds that sprouted, making my garden look like a plumbing store after an earthquake. Still, I wasn’t going to take any more chances, so back to the nursery I went for more weapons. They sold me a huge bag of diatomaceous earth.

Do you know what diatomaceous earth is? Neither did I until the lady at the nursery told me about diatoms, one-celled creatures who died in vast numbers millions of years ago, thereby leaving huge deposits of this white stuff, which, I learned, snails hate. It was easy to see why. The stuff feels like oily powder or powdery oil, take your pick. Two weeks later, little green sprouts popped up through the diatomaceous earth, and wonder of wonders, the snails and slugs left them alone, but just to make sure, I secured copper collars on each sprout and sprinkled cayenne pepper around, too, having heard—from the nursery lady again—that snails hate pepper. That left me with a very odd red, white, and green garden.

But, hey, I had the last laugh. Two months later, I sat down to a dinner of delicious pole beans. I’d probably paid $23 a pound for them, so I ate my home-grown beans very slowly. ❖

By John Runnette, published originally in 2016-17, in GreenPrints Issue #108. Illustrated by Tim Foley

Does this story remind you of one of your own stories of snails in the garden?  Leave a comment and share it with us!

Why Type of Gardener Are You?
A Story of Real Tulip Love (and a Little Gambling)