Whenever I even attempt to say those words before starting a project, my husband Patrick puts his index finger to his lips in a “shhhh” motion, not to jinx it and make another garden mistake.

I don’t blame him. There was this one time I made a pollinator hotel where I kicked off the afternoon saying it would be “super easy” and “not a big deal” before it took eight hours and all the sunlight of the day before it was ready to hang. Even now, I’m pretty sure the pollinators think it’s a shanty.

Then there was that day I said building a raised bed would be too difficult (you know, nailing four boards together), so I built a 9-pot vertical lettuce garden instead that took two days to complete and paint. Maybe I have a knack for underestimation, but some people would call that optimism!

And hey, starting any project with the mindset that it’s going to take a long time is a good way to get analysis paralysis, and who needs that?

In today’s piece, Quick Mulch Job, author Gregg Jones makes a big garden mistake: he says he’s going to start “a quick mulch job.” Well, once you say it out loud, you know what’s going to happen next, and his story is worth reading for the relatable chuckle you’ll get out of it.

Up for More Funny Garden “Mistakes”?

This story comes from our archive that spans over 30 years and includes more than 130 magazine issues of GreenPrints. Pieces like these that inject stories of gardening into everyday life lessons always brighten up my day, and I hope it does for you as well. Enjoy!

like to offer a warning about the myth of a “quick mulch job.”

I should know that mulching is never as easy as I expect (isn’t this a universal law for every project?), but I recently proved it—yet again.

It happened one lovely Summer day when my wife and I decided to weed our flower beds. I don’t know why: It seemed like a good idea at the time. I guess I thought it would be nice to spend a beautiful afternoon on my hands and knees as little pieces of trees dug into my skin and I dodged giant hairy spiders.

I guess it didn’t cross my mind that weeding would actually mean pulling the leaves off of weeds while the roots remained in the ground—and intermittently grabbing rose stems full of thorns.

As we were pulling weeds, we agreed to mulch the flower beds. That was a joint decision. I am not taking the full blame.
My thought was go to the store, buy a couple of bags of mulch for $20, come home and—bada bing, bada boom—one hour later I’d be sipping a cold drink and admiring the freshly mulched beds.
I was way wrong.
Once we got to the store, our mulching venture turned into a full-out plant-hunting expedition that included two new rose bushes, some kind of yellow flowering plant, and eight bags of mulch. Eighty dollars later and we were on our way.

I was still under the impression this wouldn’t take too long.

Then we (jointly) decided that it would be best to lay newspaper down before the mulch in an effort to keep the weeds at bay. We have some invasive vines that have been sneaking into the garden and begun to wrap around the plants we like—while leaving the weeds alone. It would have been much more convenient for these vines to wrap around the weeds and kill them. Then I would have never started on this mulching adventure.

Because we used newspaper, we had to use more mulch to cover said newspaper. That, of course, meant another trip to the store and six more bags of mulch. My lazy Sunday had turned into a serious investment in flowers, plants, tree bark—and time. 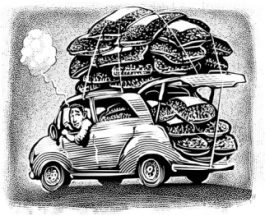 While I was spreading the first few bags of mulch, before the heat of the day was on us, there were no problems. I would grab a bag, open it, and throw its contents across the newspaper.

As the day wore on and I wore out, the bags got heavier, steamier, and wetter. It seemed like the garden shop attendant had been watering the mulch instead of the plants.
For a while I was feeling like Sisyphus, the Greek guy who was punished for lying by having to forever roll a boulder up a hill and then watch it roll back down. I was being punished by the Greek God of Mulch for thinking that mulching was an easy job. (Note to self: Stay on the good side of Greek Gods!)
Or was it Mother Nature I had offended by attempting a botanical cover-up job? (It’s not nice to mulch Mother Nature?)
In any case, although it seemed like it would never end, it finally did. And you know what? The flower beds looked good! My wife and I? Not so much. ❖

By Gregg Jones, published originally in 2018, in GreenPrints Issue #114. Illustrations By Tim Foley

I’d love to hear more about your “oops” projects that took a lot longer than expected, leave a comment and share your story!