SStealing is a sin and a crime, but what about picking up fruit that’s fallen in someone’s yard? This was a serious issue for me after I moved to California from Hong Kong, where there are no yards at all. Here, apricot, cherry, peach, plum, orange, lemon, grapefruit, persimmon, apple, fig, and loquat trees are common ornamentals. And people seem to consider them just that—ornamentals—allowing entire crops to end up on the ground, rotting. This is heart-wrenching, because I feel it’s a waste, and irresistibly tempting, because fallen fruit is fully tree ripened, the best there is. But does that make it free? If I were a squirrel, this would not be a question. But I am a person, with a backpack.

Stealing is a sin, but what about picking up fruit that’s fallen in someone’s yard?

Having lived in this neighborhood for nearly ten years, walking and bicycling, I know where the fruit is. And because I am a gardener, I know when it ripens. Fruit actually on the tree is off-limits, that’s clear (and fine with me; I figure it’s not quite ripe, anyway). Fruit on the sidewalk or street is also clearly public. But what about fruit on the lawn or driveway? I have had many internal debates over this quandary. They still occur, but less forcefully somehow since my experience with Kevin’s oranges …

Kevin‘s yard has two orange trees. This year the trees were loaded, the sidewalk eventually covered with both ripe and squashed fruit. One day as I stood contemplating the bounty, a man in the yard (whom I hadn’t noticed but now know to be Kevin) offered, “Help yourself!” 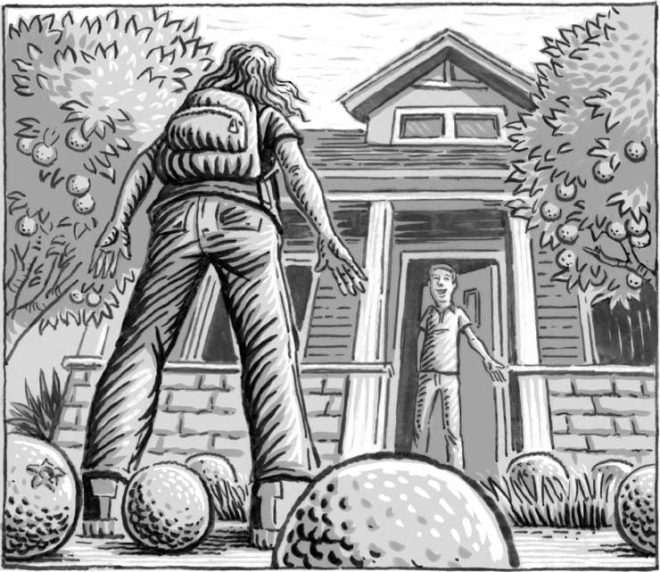 “Really, can I?” I asked, thrilled at this resolution of all issues involved.

The next day I returned with plastic bags, but the best fruit was out of reach. Kevin again happened to be there and offered to lend me his fruit-picking basket tool. Great! I stood under the tree, collecting fruit. Three-year-old Brian came out to help, as did the family dog. We had a great time.

The day after, I returned with the promised jam. Again Kevin happened to be there—I was beginning to think he just lived on his porch. “Hey, do you want some peaches?” he asked. “We have more than we can eat; they are just falling on the ground.”

Indeed they were. Large, exquisite, perfectly shaped peaches were littering the ground.

Suddenly a voice came from the other side of the fence: “Hey, who’s picking my peaches?” That was Jack. It turns out the peach tree is actually in Jack’s yard but hangs over into Kevin‘s.

“Hi! It’s me, Martha. Kevin said I could pick peaches. Is it OK? Do you like peach jam?”

“Sure,” Jack said. “And how about apples? We have a lot of apples. Would you like some apples?”

Well, of course, who doesn’t like apples? So with the promise of apple butter all around, I finished filling my bags with Kevin’s peaches and headed towards Jack’s back yard.

But then Jack, who had gone inside briefly, came out with an apologetic look. “I am so sorry, my wife Kim says the apples aren’t ready yet. This is really her yard, so what she says goes. But let me show you our garden.”

With that, he took me into the backyard, where squash, pumpkins, tomatoes, and fennel were growing in raised beds and raspberries, avocadoes, loquats, figs, plums, and a profusion of flowers, herbs, and shrubs spread all around. (And weeds. It looked a bit overgrown.) As we toured, I tried to—mildly—impress Jack with my horticultural knowledge, so he wouldn’t think I was just a fruit-scavenging vagrant (although there is some truth to that).

Toward the end, I mused aloud, “Would your wife like some help in the garden? I live in an apartment and would love to come … just weed.”

The rest is history. I met Kim, we bonded and now garden together every Friday morning, and she shares generously the bounty of her backyard. And because Kim was so thrilled to have me pull weeds, I found that her friend Jean also appreciates a little garden help (Saturday mornings), and now Esther is going to welcome me as soon as we can arrange a date.

The jury is still out on whether taking fallen fruit is reprehensible. I still notice when fruit is ripening in the neighborhood (loquats, for example, are at this moment ripening on Wilton and El Caminita, should you be in the area). But somehow, finding it on the ground has lost its appeal. After all, I now have lots of sources of fruit.