I don’t like to pick favorites (or maybe I do, that’s what I’m doing here each day, isn’t it?) but whenever one of Becky Rupp’s pieces about gardening science comes up, I am always eager to digest it and today’s share is a great example!

In April Showers, Becky explains how we discovered that “plants rain up”, how water got to planet Earth in the first place, and why ecologist/agriculturalist John Jeavons wrote, “Man, despite his artistic pretensions, his sophistication, and his many accomplishments, owes his existence to a six-inch layer of topsoil and the fact that it rains.”

Life seems a bit more fragile now, doesn’t it? I mean, I make a decent topsoil, but is it enough to sustain … all of existence?

Jokes aside, this piece I’m sharing with you today about gardening science might turn your beliefs about our planet upside down. For example, did you know that Leonardo da Vinci in the 15th century suggested that “water continually circulated between seas and rivers, with clouds and rain bridging the gap in between?” But everyone thought he was looney, so it took until the 16th century and Italian mathematician Girolamo Cardano for the theory to be understood and proven.

And did you know that the water on earth came here via ice from outer space? There’s so much I’d love to go on about, but you might as well just start reading this absolutely informative and fun piece from Becky herself!

The Gardening Science Behind Where Water Comes From

This story comes from our archive that spans over 30 years and includes more than 130 magazine issues of GreenPrints. Gardening science pieces like these always light me up with wonder about the universe and I hope it does for you too. Enjoy!

And how they get here. 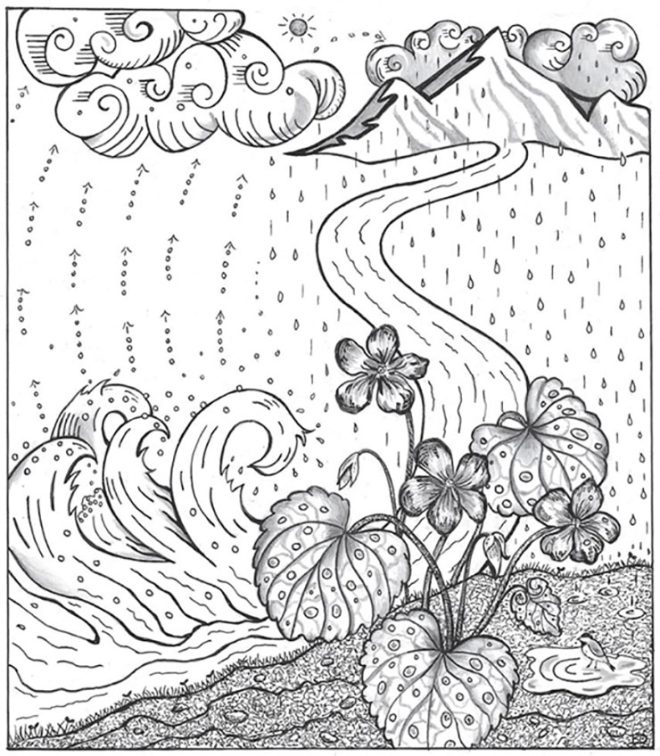 April showers bring May flowers” is a proverb that dates at least to 1560. That is, more or less. The 16th-century version was “Aprell sylver showers so sweet/Can make May flowers to sprynge.”

Suspiciously I looked this up. Do April showers make May flowers? A lot of proverbs, after all, are diddlysquat. “There’s no such thing as a free lunch” may be right on, but “The ends justify the means” is surely problematic, and “What you don’t know can’t hurt you” is patently a lie. And, no matter what they say, everybody doesn’t love a lord. Just ask Prince Charles.

On the other hand, I’m willing to believe that April showers are raining violets somewhere. Just not here in northern Vermont. According to our local weather records, May, June, July, and August all get way more rain than April. Moreover, to my certain knowledge, a lot of Vermont precipitation in April falls in the form of snow.

Whenever it shows up, however, I’m a fan of rain. And historically, a lot of other people have been, too. Anything good traditionally is said to fall like rain (mercy, blessings, pennies from heaven), and “right as rain” since 1894 has meant something perfect, peerless, absolutely splendid. Granted, Henry Wadsworth Longfellow glumped that into every life some rain must fall (some days are dark and dreary), but clearly Henry wasn’t a gardener.

Rain is the middle step in the water cycle, the endless global recycling of water that has been taking place on our planet for over four billion years. And a lot of the rain that falls today is old water. When it comes to recycling, the water cycle is a master. Much of the water caught in its endless loop has been circling from Earth to sky and back again for multiple millions of years.

In fact, scientists calculate that the bulk of the molecules in any puddle, rain barrel, glass of water, or garden hose were drunk some 65 million years ago or more by dinosaurs. The water we’re dousing our vegetables with is—well, pretty much recycled Jurassic pee.

Then there’s the sticky question of how the water cycle got its start. Earth, after all, despite a lot of creation stories to the contrary, wasn’t born with water. Our current 326 million trillion gallons came from somewhere else. The most likely guess, scientists now believe, is that our water hurtled in on ancient asteroids. Rain, in other words—the stuff we slosh through with slickers and umbrellas—arrived as ice from outer space.

Every year about 120,000 cubic-miles-worth of water evaporates from the planet’s surface—about 90% of it from the oceans. The remainder comes from lakes, streams, rivers, and plants. Our gardens play a tiny part in every single rain shower. Rain falls down because—at least in part—plants rain up.

They do this via the process of transpiration, in which plants continually throw water—originally sucked up from the ground— back into the atmosphere through tiny openings called stomata in their leaves. Each leaf can have anywhere from 1000 to 40,000 stomata, and all are energetic, if tiny, water pumps. The average field of corn transpires 3000-4000 gallons of water a day. A single oak tree pumps out a daily 200-300 gallons. The rainforest is called the rainforest because—literally—its leaves make rain.

The idea of the water cycle is comparatively new. The Greek philosopher Plato, who lived in the 4th century BCE, claimed that all surface water continually burbled up from a mysterious hole beneath the sea, running through some rocky filter that miraculously eliminated the salt. Leonardo da Vinci in the 15th century nixed the burbling, salt-filtering hole, and suggested instead that water continually circulated between seas and rivers, with clouds and rain bridging the gap in between.

Nobody believed him, so credit for the water cycle as we now know it generally goes to 16th-century Italian mathematician Girolamo Cardano. Cardano—a brilliant but erratic polymath—had a career punctuated by prison terms, many for gambling debts and at least one for impiously casting the horoscope of Jesus Christ. On the plus side, he wrote a seminal treatise on probability, invented the combination lock, and cured the Archbishop of Scotland of asthma.

His water cycle hypothesis, published in 1550, was pretty much the stuff of textbooks today: Water evaporates from the seas, accumulates in the atmosphere as clouds, falls to Earth as rain, is carried by rivers to the sea, and then repeats the process all over again.

Not everybody liked this: Critics felt that there simply wasn’t enough rain to account for all the water in lakes, streams, and rivers. Subsequent calculations, however, showed that there was. A couple of clearly obsessive 16th-century French scientists managed to calculate that the amount of rain that fell annually on the Seine drainage basin equaled the amount of water annually dumped by the same into the English Channel. This was convincing enough that the idea of the water cycle—unlike that of the heliocentric solar system or the theory of evolution—was vetted by the church, and passed smoothly into the popular domain.

“Man, despite his artistic pretensions, his sophistication, and his many accomplishments,” wrote ecologist/agriculturalist John Jeavons, “owes his existence to a six-inch layer of topsoil and the fact that it rains.”

Unfortunately, it doesn’t rain with equal reliability everywhere. Today over one billion people worldwide lack access to fresh water. Right now, California just had its third year of record-breaking drought. Chile’s Atacama Desert averages only two-tenths of an inch of rain per year. Antarctica—which, to be fair, has other climatic problems—gets no rainfall at all. 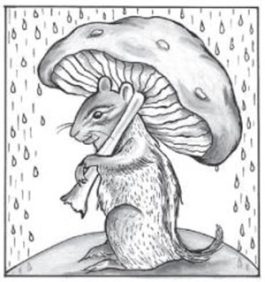 How lucky we are to have rain, even when it leaks onto the cellar floor, even when days are dark and dreary. Every drop of it is made by oceans and lakes, rivers and brooks, fields and forests. It comes to us from asteroids from the depths of space, via 200 million years of dinosaurs. Each drop contains one sextillion—that’s a one with 21 zeroes after it—molecules of water.

And, miraculously, it falls onto our backyards and turns into spinach, tomatoes, and beans. ❖

By Becky Rupp, published originally in 2016, in GreenPrints Issue #105. Illustrations by Blanche Derby.

Did you enjoy this gardening science story? Please tell us how it made you feel when you read this informative piece.