We’ve all probably heard of “Movember” by now, the month of November when men decide not to shave their beards, sometimes for charity, and sometimes just for social media views. But this year was the first time I heard the term “No Mow May,” and it inspired me to share an old piece about the history of lawns in North America.

“No Mow May” is the act of not mowing your lawn until June to allow pollinators the chance to gather materials and resources for the upcoming Summer season. And really, who doesn’t want to help the pollinators these days? Of course, we’ll never know if it helped, but it was quite the popular movement this year, which I see becoming a new thing in the coming years as we all get more attuned to food supply needs.

This brings us to today’s story, Lawns by Becky Rupp, who is always educating us on the history of gardens. In today’s piece, she focuses on—you guessed it—the history of lawns. Did you know that we had to import perennial grass? When presidents started creating lawns, they were generally just patches of weeds they cut down to look like lawns, which were popular in Europe.

Grass isn’t exactly great for the environment, as Rupp shares. “Lawns suck up an immense amount of water (collectively, according to one guess, 200 gallons per person per day); we drench them in chemical fertilizers and weedkillers; and we mow them with gas-powered mowers which, hour for hour, pump out eleven times more air pollutants than the average car.” That’s enough to make you gulp when you think about how proud you are of your manicured lawn, isn’t it?

But Rupp doesn’t offer all doom and gloom in her history of lawns; she also brings up some great ideas for using your yard in productive ways. Keep reading, because I’m sure you’ll love this one as much as I did!

The History of Lawns and the Parts We Play Now

This story comes from our archive that spans over 30 years and includes more than 130 magazine issues of GreenPrints. Pieces like these that inject the science of gardening into everyday life lessons always brighten up my day, and I hope it does for you as well. Enjoy! 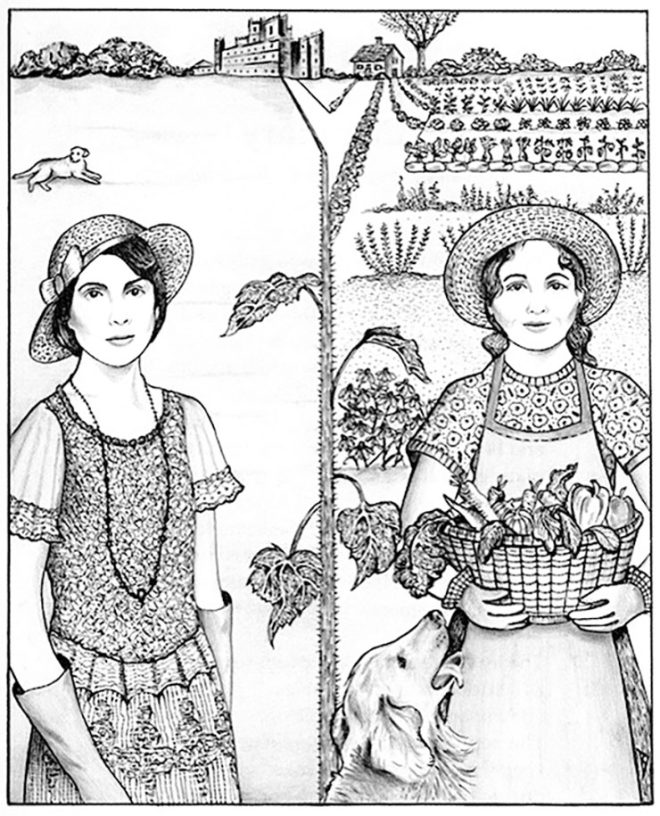 Let’s cut them and cut back on them.

I love the Downton Abbey. I’m willing to put up with all its foibles—the lackluster Lady Edith; the snippy Lady Mary; the continual arrests of one or the other of the Bateses; Thomas, the conniving footman—just so I can get a glimpse of aristocratic British country life in the early 20th century. There’s something irresistible about watching people who never wear jeans and have valets to help them button their suspenders.

What continually fascinates me, though, is the Downton lawn. Apparently, there are miles of it. Who cuts it? you can’t help but wonder. Housemaids with scissors?

The American lawn obsession—and you know we have one; just listen to the Saturday morning drone of the riding lawnmowers—is all the fault of the British aristocracy. Lawns first became popular among rich European landowners in the 1700s. In England, under the auspices of landscape gardener Lancelot (nicknamed “Capability”) Brown, estate after estate adopted the idea of the “natural garden”—that is, artfully designed panoramas of trees, ponds, and vast expanses of rolling lawn. Highclere Castle—the model for Downton Abbey—is surrounded by 1000 acres of lawn, put in place in the 1770s for the first Earl of Carnarvon by Capability himself.

And, in the second place, the average early Colonist wasn’t about to fool around with maintaining a lawn. Though George Washington referred to the field below his bowling green as a “lawn” at Mount Vernon, and Thomas Jefferson created a European-style lawn at Monticello, lawns—the tidy plots on which modern homeowners set up their croquet hoops and badminton nets—didn’t really become popular in America until after the Civil War. Charles Dickens, touring the country in 1842, sneer at our lawnlessness, pointing out that, in lieu of the “well-trimmed lawns and green meadows of home,” slovenly Americans had only “rank, rough, and wild” tuffs of weeds.

“A smooth, closely shaven surface of grass is by far the most essential element of beauty on the grounds of a suburban house,” one landscaper wrote. “Let your lawn be your home’s velvet robe, and your flowers it’s not too promiscuous decoration.”

As it turns out, though, the care we give our grass isn’t necessarily the best choice for people on the planet. Lawns suck up an immense about of water (collectively, according to one guess, 200 gallons per person per day); we drench them in chemical fertilizers and weedkillers; and we mow them with gas-powered mowers which, hour for hour, pump out eleven times more air pollutants than the average car. Rats, I thought when I read that.

I’ve always liked mowing the lawn. I like being outside on the tractor, going around in pleasantly mindless circles. It’s a meditative, alpha-wave-generating sort of activity, and cut grass smells good.

Still, there are nice things about lawns. A lawn, writes Katherine White in her now-classic Onward and Upward in the Garden, provides a “soft mattress for creeping baby; worm hatchery for a robin; croquet or badminton court; baseball diamond; restful green perspectives leading the eye to a background of flower border, shrubs, or hedges… “ And you can roll on them, run around barefoot on them, or lie on a blanket on them and stargaze. 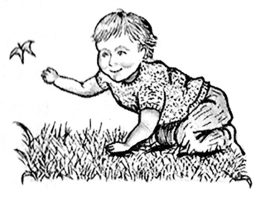 So no, I don’t want to lose the lawn altogether. Instead, we’re going to add more vegetable plants, encourage wildflower patches, and mow a little less.

By Becky Rupp, published originally in 2015, in GreenPrints Issue #102. Illustrations by Blanche Derby.

Did you enjoy this story about the history of lawns? Leave a comment below with your own story!