As parents and grandparents of potential young gardeners, we have watched whimsical playtime in the backyard turn to bright staring faces behind blue tablets and screens. Eating out at a restaurant used to be a big deal that deserved full attention, but nowadays, you’re lucky to dine out and see a family with their faces up and pointed at one another, instead of a handheld device. Today’s story, Wild Things! by Bobbie Cyphers offers a little hope for this next generation of young gardeners and their connection with the natural world and each other.

If you’re of my generation, you remember the days when TV was only a minor part of childhood, and the better part of the day was spent outside in nature. Sure, maybe it wasn’t all tree forts and flower garlands, but there was street hockey with neighborhood friends, and games of Monopoly played on porches. There was “come home when it gets dark out” or “bring a watch, dinner is at 6.”

Times have changed, surely, but it makes me sad that so few kids want to grow up and be farmers or horticulturists these days. After all, video game programmers and web designers still want their avocado toast, and somebody has to grow the avocados and those fancy pea greens they sprinkle on top!

Today’s piece is a glimpse into the nature of children and wonder, and how they embrace nature when it’s offered to them. We just have to be willing to take the time to help them slow down and see it.

This story comes from our archive that spans over 30 years and includes more than 130 magazine issues of GreenPrints. Pieces like these that inject the joy of gardening with kids into everyday life lessons always brighten up my day, and I hope it does for you as well. Enjoy!

Bringing kids and nature together.

Author’s Note: Every time I begin to despair over how out of touch with the outdoors, with nature, we humans have become, I look up a group of kids and see what I can do.

In the shade of mingling paulownias, eight children sprawled like a litter of puppies atop a blue tarp, fair heads and dark dappled by sunlight. Seasoned veterans of our library’s Summer reading program, they radiated skepticism. Under their scrutiny, all my hours of planning (upwards of 20) and gathering (five, two after twilight the night before) seemed not quite up to the task of engaging such a jaded lot of post-millennial, first-to-third graders.

On the table before them stood discarded turtle shells, abandoned bird nests, and butterfly husks. Plants of various olfactory and tactile properties flaunted their attributes. And in specially prepared, temporary museums (a flat of old potting soil and a quart jar with a perforated lid) dwelled several earthworms and two adolescent tadpoles, all four legs exposed.

Not really a sea of faces—more a puddle—the children looked up at me and waited. These were my charges, for one fleeting hour, this small congregation of fledgling souls.

“I am a very, very lucky person. Every morning I get to go outside and play. If I really listen, I’ll hear the very first bird of the morning say ‘Hello.’ If I close my eyes and breathe, I can smell fennel that tastes like licorice and roses that smell like tea. I can hug a hickory tree and taste raindrops. Every day I get to watch frogs leap into the pond and feel the water splash on my face.” 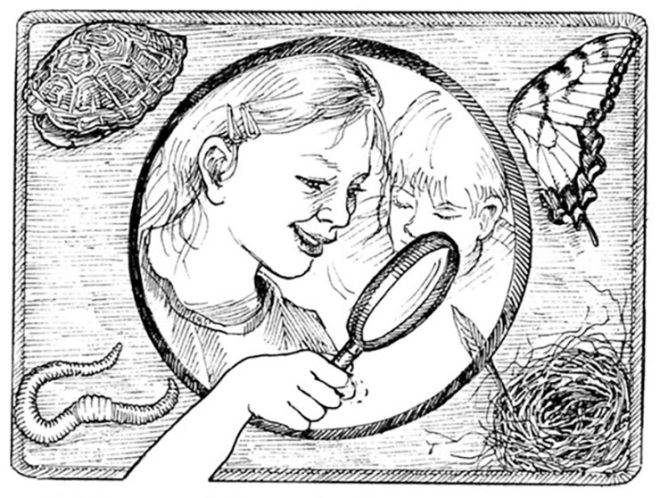 My squirming octet stilled. “Now let me show you what I found right outside my door.”

I plucked a nest from the table and held it in the palm of my hand. Upturned faces, expressions rapt, made me feel like Merlin—or Dumbledore.

I told them I never collect a nest until the birds have moved out, finished for the season. “Even this one,” and I lifted my husband’s straw hat off the table. Tucked inside, a nest woven of grasses, fluff, and hair from one Great Pyrenees lay emptied of its small family of wrens.

I pointed to the logs I’d brought, ripe with polypore and parchment mushrooms and oozing gelatinous crustose and foliose lichens, and invited them up to touch.

Shoved aside by a springy-curled pixie, he watched with admiration as she patted a lumpy lichen. “I like it,” she said.

Then they were all on their feet reaching for a nest, rubbing a lavender bud, digging into damp soil, rooting out an earthworm.

One puzzled second-grader contemplated the shell of a box turtle, and I told him that one time I watched just such a turtle dig a hole with her fat, clawed feet, lay her eggs, then cover them up. “And it took longer than a ‘Spongebob Squarepants’ show.

“This kind of turtle can live to be 100 years old,” I added. “That’s even older than me.” They stared at the shell—and me.

For long minutes we immersed ourselves in the natural world, awash in the mystery of it all. “Imagine,” I coaxed, “all this is right outside, in our own backyards.” Astounded at the sights seen through magnifying glasses—89 cents each courtesy of a dollar store—the children studied an earthworm’s belly corsets, the hieroglyphics of a swallowtail’s wing, and the nesting material contributed by man’s—and woman’s—best friend. One little girl trained her lens on the tree where I told them swallows had made a home. “Where is it? Where is it?” she cried.

Good citizenship in action, they shared the four spyglasses among themselves, with minimal prompting, until they all had found the nest.

As the hour wound down, I presented the pièce de résistance—the living, breathing tadpole twins, straight from their home waters and soon to return.

We were almost there. Remembering a long, long time ago, when a band of intrepid Girl Scouts serenaded fireflies by an open fire, I opened my mouth and—rusty voice and all—sang, “There’s a hole, there’s a hole, there’s a hole in the bottom of the sea.” I went on to populate the hole with a log, then a knot on the log, next, a “FROG!” on the knot, followed by a wart on the frog, and a hair on the wart, and so on down the line of memories. When the song ended, the little crowd cheered. One mother even said, “Bravo!”

It was over. My hope was rekindled. It could have been my daughter and her mates from a too-distant childhood on the big blue tarp. Same curiosity, same excitement, same wondrous awe. And I thought: Let them be children. In time they will take on the mantle of caring for the earth. But first they must be allowed outside to play upon it. Only then will they love it.

Only then will they care. ❖

Do you have young gardeners in your life? How do you get them interested in what’s happening outdoors?