There are many quotes in today’s piece from Diana Wells dating back as far as 1597 about the premise that what we are cultivating is a garden of miracles in our backyards. But the quote I think I like the most comes from Diana herself: “How lucky we gardeners are, especially in Springtime, to be able to concentrate on miracles.”

As she reminds us continually throughout the piece, it may be that our love for our garden is built on our love of these wonders; From finding sprouts in the cracks of sidewalks, to watching bulbs re-bloom year after year.

In her story, Diana shares a time she found a tiny tomato plant underneath her picnic table. “All right, you silly plant,” she said, and dug it up. “I kept it in a pot all winter. As if in gratitude, it grew and grew, and I had to prune it until it could go outside—where there was no stopping it. Eventually, it reached 15 feet high and 8 feet across (truly), covering everything around it and filling the porch gutter,” she writes.

Decades could pass and I’m sure Diana, and now I, will remember small miracles like these. The little tomato plant that could.

Celebrate Your Garden of Miracles

This story comes from our archive that spans over 30 years and includes more than 130 magazine issues of GreenPrints. Pieces like these that inject gardening history into everyday life lessons always brighten up my day, and I hope it does for you as well. Enjoy! 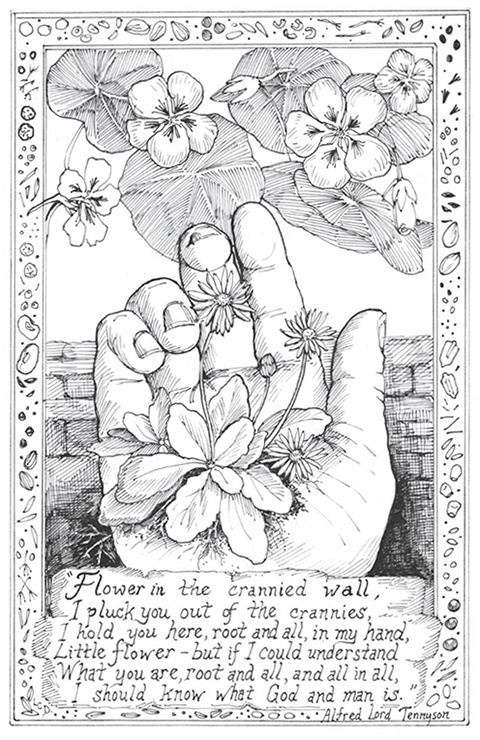 (I don’t worry much about my own identity being stolen. Who would want to be me, pottering around without an iPad, without a television, without a camera, talking—as you’ll see—to tomatoes? I don’t think there’d be many takers!) I don’t grow all my plants from seed—especially not tomatoes. Last year, however, when I was clearing up the garden in late October, I came across a tiny tomato seedling under our picnic table. What could I do? “All right, you silly plant,” I said, and dug it up. I kept it in a pot all winter. As if in gratitude, it grew, and grew, and I had to prune it until it could go outside—where there was no stopping it. Eventually, it reached 15 feet high and 8 feet across (truly), covering everything around it and filling the porch gutter. It produced an abundance of small yellow tomatoes—not the best I have ever eaten, I admit. But it had already made a miracle. What more could I ask of it?

Did you enjoy this gardening history story? Please tell us how it made you feel when you read this heart-warming piece. Do you feel like you have a garden of miracles too?

A Foul but Funny Gardening Tale
A Black Thumb or a Simple Gardening Mishap?