I’ve been growing a garden for years, and have always heard the tales of other gardeners’ cross-pollination woes, but it’s never happened to me. I was always so careful to keep my plants separate, and to only grow heirloom varieties. But then there was this year, where something went terribly wrong.

I noticed it first with my green peppers. They were getting bigger and more plentiful than usual, but they also started to taste different. Much spicier than I’d expect a bell pepper to be with a hint of another flavor that I couldn’t place. I assumed it was something in the soil, or maybe the water, but I couldn’t figure it out. Then, my shishitos started tasting strange too. I know that 1 out of 10 shishito peppers is spicy, but I was getting entire harvests of really spicy peppers. In fact, all of my vegetables started tasting different. I tried everything I could think of to figure out what was going on, but nothing worked. I even had my soil tested, but the results came back normal.

I was stumped until one day, I was talking to my neighbor about it. He’s a gardener too, and he told me that he’d been having the same problem. That’s when it dawned on me: my plants had been cross-pollinated!

Apparently, the wind had blown some of my pollen over to his garden, and vice versa. The thing is, all he grows is hot peppers, and not just mildly hot peppers, but ghost peppers, piri piri, and habanero. That explained a lot.

I was both relieved and amused. I was glad that I finally figured it out, but I couldn’t help but laugh at the irony of it. For years, I had been so careful to avoid cross-pollination between sweet and hot peppers, and yet it happened anyway. I guess you can’t control everything in gardening!

If you enjoy laughing at the misfortunes of others’ cross-pollination, you’ll love today’s piece, Squash Bomb! by Gholam Fatemi. If you’ve never been asked by a stranger whether you’re carrying a bomb, when what you’re actually holding is a harvest, then are you even a gardener?

The Best Cross-Pollination Mishaps and More

This story comes from our archive that spans over 30 years and includes more than 130 magazine issues of GreenPrints. Pieces like these that inject gardening mishaps into everyday life lessons always brighten up my day, and I hope it does for you as well. Enjoy! 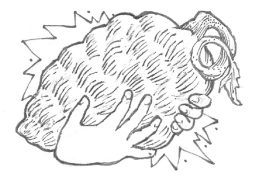 I am thinking in terms of metaphors and similes—and the fact that sometimes they come true. How is that, you may ask?

One day I was walking home with a squash I had picked at my community garden plot. It was large and, well, unique—sort of a cross between a zucchini and an acorn squash. Yes, I know about the birds and the bees, but my knowledge of plant pollination is at best limited. This squash was the fruit of a seed that I had saved from my zucchini crop the previous year. Bees had done their mischief, though, and created this new phantasmagoria.

So here I was walking home with my hybrid harvest, feeling a bit proud of it, actually, when a neighbor woman saw me. “What is that, a bomb?” she asked.

“No, a squash,” I replied and continued on my way. To tell the truth, I was somewhat crestfallen that a neighbor would think so low of me—to insinuate that I would bring a bomb into our neighborhood!

But then I looked at the squash again. Sure enough, it did resemble an oversized hand grenade. Perhaps my neighbor had a sixth sense, some kind of extrasensory perception that could predict future events. I thought of the line, “My love is like a red, red rose,” and heard myself say, “My squash is like a big, big bomb.”

I put that silly thought out of my head and went home. When I arrived, I decided to microwave the squash while I was taking a shower. I put the whole thing in the microwave, set the timer, and got in the shower. After a few minutes, I heard a massive “KABLOOM!”

Needless to say, the door to the microwave was blown open, and there was shrapnel (squash seeds and flesh) all over the place. The next time I see one of those things growing in my garden, I’m not going to take it home. No, no—I’m going to run! ❖

Cross-pollination isn’t usually funny when it happens, but we can laugh about it now. What’s your best story?

Breaking Ground and Building a New Garden
The Most Important Garden