Ouch, the pain of moving and building a new garden—I’ve felt that before, have you? In my case, the yard we moved into had been perfectly manicured before we arrived to ruin it, and they used generous amounts of weed killer, according to their old landscaper. Needless to say, after two years of having already grown and consumed a garden on an old plot of poison, we built raised beds instead.

Now we’re considering moving again, and I sweat thinking about my blueberry bushes that finally delivered a huge bounty this Summer, my three-year-old asparagus finally maturing, my two-year-old apple tree serving up pie, and the 25 bare-root strawberry plants that should be fruitful next June. I’d be happy to pack up all my stuff and go, but the unpackables of a garden—that’s a paring knife straight to the heart.

Today’s story, You’re Lucky by Jill Draper made me cringe just thinking of plunging a shovel into new rocky soil that had never been turned before. I get chills thinking of the gravel under the dirt, so clearly not meant for gardening, or at least not without modification. And to think, she moved 800 miles with no gardening friends to snag clippings or divisions from. The horror!

But what else is gardening, if not creating new life from something that doesn’t exist yet, and that’s exactly the spirit that Jill took on when she decided to turn her flat plot of land into a bouquet of fresh flowers and vegetables.

Building a New Garden Isn’t for the Faint of Heart

I have started several gardens in my life—tilling, layering, planting, and mulching. Each time I moved across town, I would dig up bulbs, perennials, and sometimes even small shrubs to put in my new yard. But when I moved 800 miles and across three states to Missouri last August, I had to leave all my plants behind.

Worse yet, there was nothing, garden-wise, I was moving to. The house we purchased had a flat backyard and little else. The previous owner was a container gardener, a neighbor told me. She had left nothing, not even an empty flowerpot.

After we moved in, I surveyed the situation, squared my shoulders, and decided the only thing to do was to begin from scratch—again. The most likely place for a garden was a sunny spot against a wooden fence. I made a curved line by dribbling a bit of flour. Then I grabbed a shovel, placed it on the line, and pushed. Nothing happened. I pushed again. Again, nothing. I jumped on the shovel, hard. Only then did it pierce through the yard’s thick sod. Two hours later, I had cleared enough space for a few tomato plants. I kept up this jarring routine every fair-weather weekend until my husband took pity and attacked the rest of the area with a mattock.

Next came the fun part—the planting. But I was working with a limited budget and had no friends or nearby relatives who could give me cuttings and divisions. With a minimum of strategy, I cobbled together a kitchen garden. I tucked in three varieties of peppers and tomatoes purchased from a nursery, eggplants and bee balms snatched up from a hardware-store parking-lot sale, and okra and other seeds I’d found in my old seed packets. I moved a clump of ornamental grass from the front yard, added a lavender plant from a welcome basket, and some dianthus my daughter received from her college dorm leader. I planted flower seeds from my housepainter’s mother, basil seeds saved from my old yard, and coneflowers left over from a landscaping job where I worked. Butternut squash volunteers popped up from the not-quite-finished compost I had scattered around. 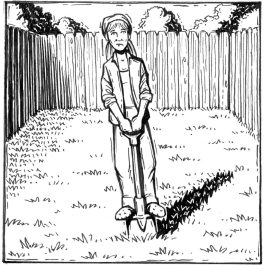 By midsummer, despite damage from rabbits, flea beetles, a fertilizer mistake (resulting in four-foot-high marigolds with no blooms), and a toad-chasing dog, the garden was looking good. I invited some new friends over for dinner on the patio.

“Do you like to garden?” I asked the woman hopefully

“Oh, I would,” she replied, “but my backyard isn’t dug. There’s nothing in it but grass and bugs. And my dog would probably mess it up.”

She glanced over to the curved plot against the fence. Zinnias were blooming in a rainbow of colors, and tomato plants arched over their cages. Spidery cleome blossoms reached nearly as tall as the sturdy okra behind them. Sweet-smelling alyssum and spicy basil plants weaved through it all. She casually waved her hand in that direction and took a sip of her iced beverage.

“You’re lucky,” she said. “You found a place where somebody’d already planted things.” ❖

By Jill Draper, published originally in 2009, in GreenPrints Issue #79. Illustrations By Shelley Jackson

I don’t know if I’d have taken to a new plot so easily, would you? Which of your plants would make you saddest to leave behind? Or would you attempt to transplant instead?

Who Says You Can’t Have an Apartment Garden?
Cross-Pollination Fails in the Garden